One evening, I was lucky enough to be driving through the mountains on my way home when the photo I posted here happened. But that’s not what caused me to careen off the freeway onto the nearest off-ramp just a bit earlier,  eyes glued to the sky and scamper off into the rocks with thongs on. This did: 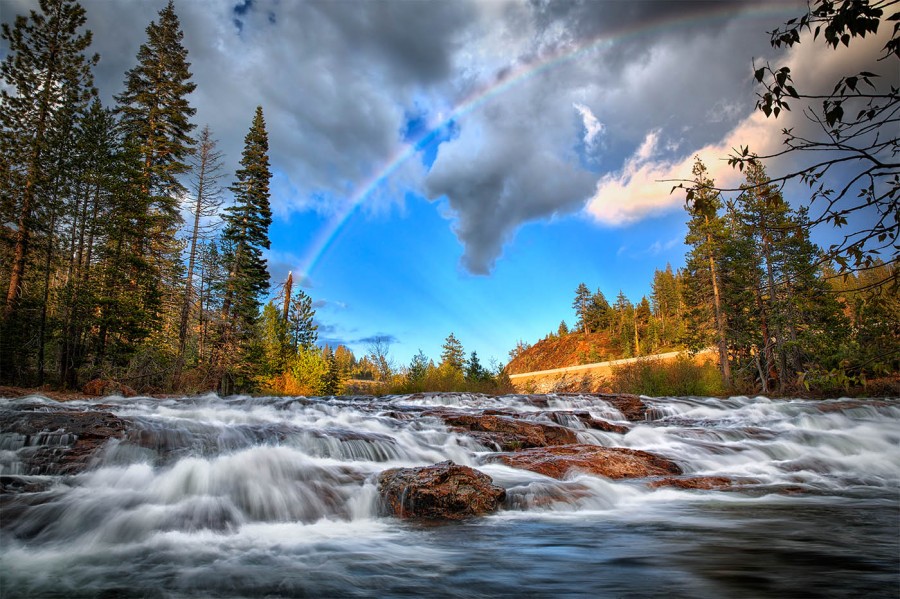 I giggled gleefully and I raced into position as quickly as I could with bad footwear – so that the rainbow would be growing right out of the river. It faded, got stronger, was a double for a few seconds… and threatened to fade altogether before I could get my camera set up. Capricious! It was like a bad relationship, where you never know quite where you stand.

I knew where I needed to stand though… as close to the water’s edge as I could without falling in. (Not falling into a snow melt driven river is a big plus in my book.) Levitating would actually have been nice. I’d position myself off to the right over the river, hovering just above water level, branches away from my line of sight. Oh yeaaaahhh. That would’ve been purrrrrfect. Do you do that? Imagine the shot you want, figure out where you have to stand or sit or lie down to get it – then realize you forgot to learn how to levitate? That so bugs. Anyhow, I did what I could with my obvious limitations and was pretty stoked to get that moody little rainbow over the river. The sky was doing some interesting things too, which was a bonus.

7 shot HDR, no filters, processed in Photoshop with NIK Software, OnOne Software and alot of glee.