You wander around the beach at sunset, visions of brilliant cloud splendor dancing in your head. And yet… the heavens just aren’t cooperating as enthusiastically as you ‘d like. What to do, what to do?
My ponderings exactly, on this particular evening with the hubs and photographer friends on 4 mile beach on Santa Cruz. 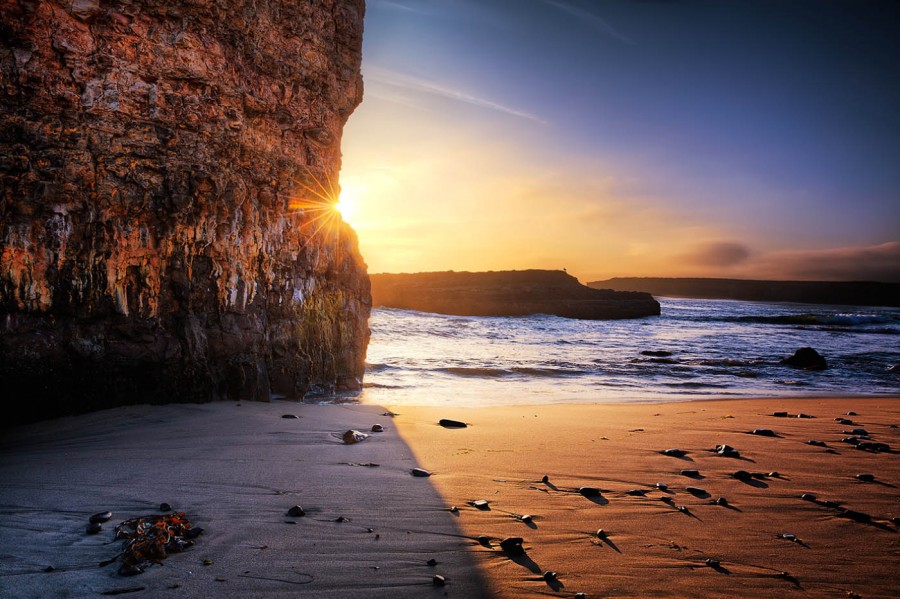 I had explored the macro and midcro distances (I just made that up. It’s that space in between macro and distance shots that needs a name. Now it has one. ahhaha!)… now I was ready for some sunset bloom. And yet… the clouds were OK, but not really popping according to my Miss Pickypants taste.

So I saw this rock. Thought it was interesting. But not enough to photograph by itself. It’s really big; but you can’t properly show scale, just standing there shooting a rock. I liked the texture though… and wanted that in the shot. The size of the rock would be suggested instead of shown; sometimes that’s more powerful anyway. And there were some other elements that added up nicely:

Most of the elements in line… excellent. Now for that powerhouse sun. I like shooting auto-bracketed images for HDR photos, so I harbor no fear of shoot into the sun. In fact I laugh outright from my belly at the mere notion of such fear! hahahah! Ahem. I digress.

Problem was (causing me to choke on my laughter just a little)  the angle on this one provided a bit ‘o challenge. I couldn’t put all of it into frame at ANY f/stop without totally blasting out the whole image with a not-so-pretty sun flare that looked more like a nuclear explosion! So, I crept around until I just got a wee bit of sun into the action… for a mini flare. A polite flare. A flare that says: “Here I am, here to provide just the right amount of pop, yet with just a touch of mystery. I offer you a peek at my glory, and leave you with just enough wonder to keep thine own self curious and interested.” Who could resist a sun-flare monologue like that?

The nice thing about finding that sweet spot for the sun also made another cool thing happen; it put that extreme dark-light division in an effective place in the image. I liked that division; there’s just something so cool and mythical about it. It also made the extreme contrast easier to manage. Check and high-five happy accidents!

Perhaps it wasn’t the shot I’d imagined when I walked out there on the beach. But photography, like life, offers about a million ways to work with what you’ve got to create a thing of beauty. I love that.