There are abandoned train tunnels in Truckee. You used to be able to drive through them, but they got tired of towing folks outta there that didn’t belong there in the first place, so now you can only walk. Or ride a bike. But it’s really, really cool. If you’re by yourself, it’s kinda spooky… some folks say it’s haunted. I do know it’s part of the first transcontinental railroad, and this section was known originally as the “Pacific Railroad” and later as the “Overland Route”. It was the first railroad to connect the Pacific Coast to San Francisco – then join up with the rest of the already-built railroad system that ended in Utah. 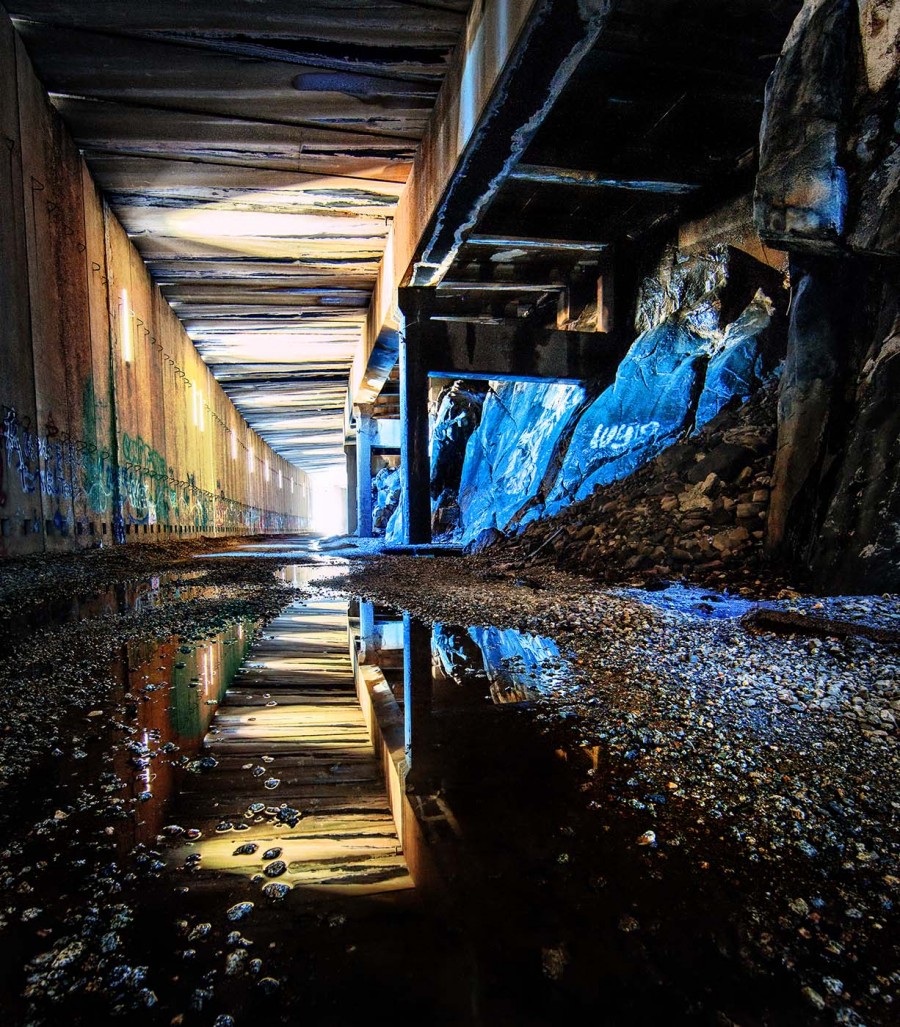 Of course, the California Gold Rush motivated alot of the desire to built it in the first place. This section of the railroad that stretches through the Sierra Nevada Mountains where I live was started in 1863, finished in 1869. Upwards of 10,000 of the workers were Chinese laborers, working for $28/month.

Conditions were dismal; bitter winters made it worse. They had to blast their way through sheer granite; treacherous to the extreme. Many of them died. Quite often, they ingeniously used techniques they’d learned in China to accomplish similar work. Which in many cases meant being lowered on ropes from the tops of cliffs in basket-like gizmos, and while suspended, they’d chip away at the granite and plant the explosives that were used to blast through, bit by bit.

When you walk through these tunnels today, you look up and see the phenomenal work they accomplished. And maybe it’s the echo of their spirit and labors still swirling around that you feel in there, one can’t be sure. But I will admit, there’s a vibe.

I don’t shoot a ton of Urbex photography (or “Mountainex”, as I call this. heh.)… so it’s always an interesting challenge for me to come up with the best way to process it. I just rely on the feeling. In this case, there was the darker, abandoned, somewhat chilly environment along with that spooky vibe that you only really feel when you’re alone and quiet in there. But also the golden light & tones, so reminiscent of the gold rush days that created this passage – and that surprisingly sharp vertical that I didn’t even see until I took the shot. The camera saw things a bit differently than I did, which was so advent-calendar-surprising!

Nowadays, amazing graffiti artists go in there and art up the walls. I’m glad they do, cause it’s awesome to photograph. And it’s such an interesting juxtaposition of recent history old and quirky modern new. The bold, brilliant colors in contrast with the starkness of rock and weather-stained cement is so evocative. It’s steampunk reality at it finest. And endlessly fascinating. I love going up there, creepy haunted vibes and all. The whispers I hear are just… wow.