Life is about context. It has its own storyline. If you live long enough and pay attention along the way – it develops as a series of defining moments. At least, this has been my experience.

I have a new project launching on August 26. I’m stoked. I’m nervous, excited, giddy, I’m crossing my T’s, dotting my I’s and checking my zipper. ha. It’ll appear here, on my social media, on YouTube. You’ll have ample opportunity on multiple platforms to see it.  I’ve got one opportunity, this week, to offer its context and the defining moments that created it. As anyone who knows me can tell you… I can’t do anything without context!

And since this project contains a certain perspective gained from being alive on this planet for a decent amount of time: I offer Part 1 of 2  of: Lessons Learned as a Life Ninja.

It begins: I’ve always been what folks back in the day called a “go-getter”. When I was young, I had a long list of things I wanted to accomplish in this lifetime and I set out to git’er done them all with the single-minded focus of a Life Ninja.

And it’s been an eye-opening experience. 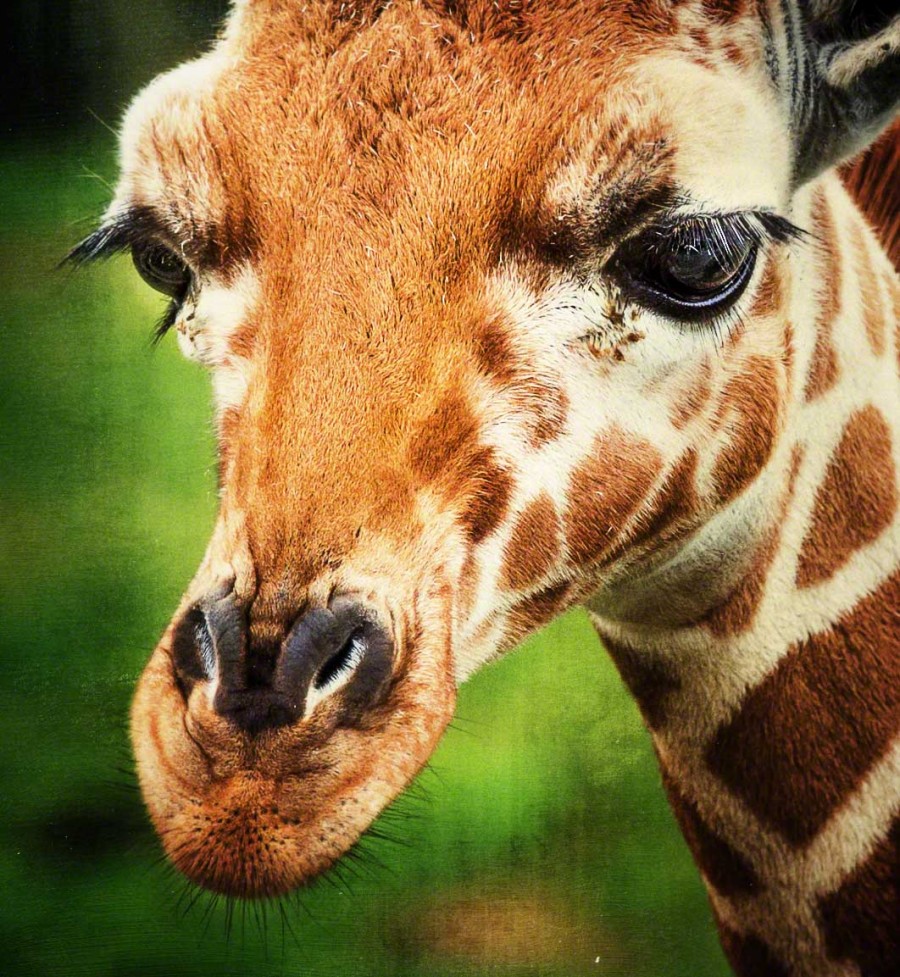 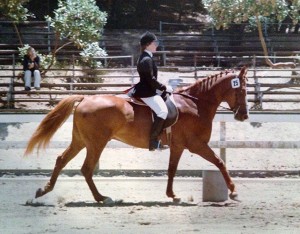 I grew up riding and training horses. My mother’s lifelong dream was to have a ranch with horses and animals and she persevered until it happened in marvelous fashion. So that became our life too, my sister and I. It was awesome. Best upbringing ever, for learning how to think about and care for someone besides yourself, how to be self-sufficient and how working hard to accomplish your goals and be successful can actually be fun and really satisfying. That certain sacrifices are really no sacrifice at all: they’re investments. I covered multiple disciplines in the course of my 40 year equestrian life: Western, Dressage, Jumping, Driving. I taught riding and trained horses for about half of that time. Maybe more, the timing is a little hazy.

My very first official teacher was a Native American cowboy named Bev Franklin who had more awesome up his sleeve than I’ve ever met since. He was my hero. When the movie “The Horse Whisperer” came out many years later, Bev was long gone. But I smiled, since all this “whispering” was exactly how I was taught to be so many years ago. The lessons I learned training horses work with people too, even now. They’re brilliant.

LESSON LEARNED: Always figure out who you’re dealing with and work with THAT, not your fantasy of who they are. (with horses, your life depends on that knowledge)

But time was ticking and I had that Life Ninja List to answer to. Figure skating was next on it.

Sad-faced clown, from the last ice show I performed in. 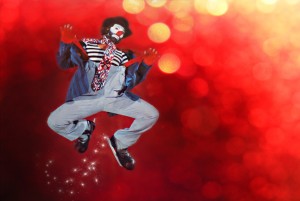 I was a little late getting started – 16 – but the second I had my driver’s license, off I went. In doing so, I was reminded that the folks’ were doing alot to support me with horses and school – so I better not let any of that slide. I didn’t. As luck would have it, Charles Schulz’ Redwood Empire Ice Arena was a mere 30 minutes away from us – and skating happened early. Ice time started at 5 a.m. – and I was on it. For many years I maintained a schedule that involved getting up at 3am, skating from 5-9 am, going to school, either skating or dance class after, then home to ride and train my horses, in bed by 8 pm. I loved every second of it! Being Schulz’ rink we also did shows and even TV specials like “She’s a Good Skate Charlie Brown”. Yes, I was one of four skaters who performed the characters. That was back in the rotoscope days. My name was even in the credits! It was the most awesome time – and once again, lessons learned that have seen me through some pretty tough times in life.

Between skating, riding, running and dance I learned the value of cross-training. Dance and running made me stronger and more graceful as a skater. The kind of balance and strength gained in skating took my equestrian work to a whole new level. Performing made me more outgoing and less shy for just about everything. The patience, discipline, focus, “keep showing up” attitude made anything possible.  Over time, it became obvious that and inter-disciplinary approach to just about everything works wonders.

Photography. It had always been a part of life, since my mom’s family photographed EVERYTHING! So did she. I loved it – and once again Miss Fortune was on my side, since Santa Rosa Junior College was five minutes away from the skating rink. The folks were big on a college education, so this was a start. I figured I’d spend 2 years there, get the 2 year AA degree… then move on to University as my sister had. The folks liked this plan. So, add that to the list of daily activities and you had quite a balancing act! The best part: they had a kickass photography department. So I signed up and after one semester decided that Photography was definitely the Awesomesauce of the Universe I always suspected it was and that I must become a professional! That is, until after a couple of years, darkroom chemicals finally had their way. Headaches, nausea, tiredness… bleh. No more darkroom for me. I wasn’t about to let someone else process my work – so that dream bubble burst. I was devastated.

I also came to the conclusion that the college/university route was NOT for me. Over my time in the system, I experimented and kept score of results were rewarded. Original Thinking: 0. Mold and conform your brain to a fixed set of rights, wrongs and random standards, regardless of what you think: 100. Cross college off the list; I was convinced I’d lose my ability to think. Now.. how to tell the parents? Yeah, that was a sticky one, but we got through it.

Even in my twenties, I somehow knew I had to keep moving. If Plan A bursts into flames, go to Plan B. I knew I need to find alternative ways to educate myself. The University system wasn’t going to cut it. I consulted The Ninja List: Acting was next.

LESSON LEARNED: Keep moving. And don’t be afraid to reinvent yourself. 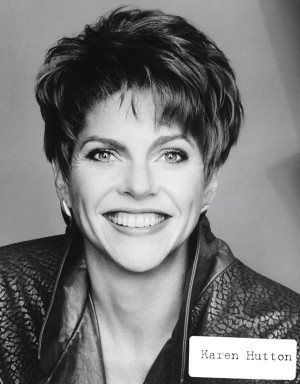 5 am ice time for a natural night owl takes its toll after awhile, I’ll admit it. The thrill of it all began to wane. The one element that wouldn’t let go: performing and acting. My mom and grandmother had both been performers and mom had a great friend who was a professional actress. She was encouraging. She always told me that among the few people who actually continued working all during the Great Depression were performers and actors. That’s all I needed to know – and away I went. I sought out the best acting schools in San Francisco I could find and threw myself into studies, first at Shelton Studios (then called “Jean Shelton Acting School”) then at the American Conservatory Theatre School. It was an illuminating, exhilarating, magnificent time! I felt like I was engaged in my education, doing what I loved most, honing my skills into a fine career. Little did I know that while it wouldn’t turn out exactly as I’d imagined, acting would bring me home like nothing else in my life. It led to stage, film, television, voiceovers. I had always thought I’d be on the New York stage… and while that part didn’t happen, something else did.

First, I had a meltdown. (Every good comeback story has one.) While acting was awesome – the industry’s rather vampiric (as I came to think of it) undertones sought to pull me under. I was losing myself and didn’t know how to fix it. Another story, another time. Now I look back and see Divine Intervention – but at the time, it seemed that a treasured dream had died when I quite acting. Did years of voice and personal development work with a wonderful woman named Joan Kenley. Over time, she was my counselor, voice coach, mentor, friend. I developed a coaching practice for voice and performance, most notably in the TV/Radio News Broadcast industry, where I was very successful for 25 years. Yep, even a couple news celebs in the mix. 😉

LESSON LEARNED: If  “normal”education doesn’t work for you, then invent your own. Seek out and learn from the brightest and the best, anyway you can. Watch, listen, learn.

Part 2? Oh, it’s coming! So is the Promo for this new project… TOMORROW!