Promo Week is almost up! I’m gulping a little bit out of what, nerves… excitement… giddiness? Oh yeah, I should breathe! This weekend I’ll be sharing who my first guest is; the perfect person to kick off this series for oh-so-many-reasons! For now, here’s your Friday reminder; “The Chat” starts Monday! And it’ll appear every Monday right here – as well as on Google+, Facebook, Twitter, Pinterest and wherever else I think to station it – all to kick off your week with a smile. 😀

(If you’ve been entertained by the back story to this whole adventure, read on: I’ll tell ya how I’m actually doing this thing – the gear, the software, the works!)

Let’s Put On A Show!

I’m a showman. Showwoman. Whatever. I love a good show. I love to make a special presentation out of everything. My husband laughs because this apparently applies to just about everything; good think he likes to be entertained! So when it came to The Chat, I wanted to make it as special as my Only Me with Zero Budget could make it. I mean, there is no revenue model for this – it’s totally Let’s Put On a Show, Judy Garland and Mickey Rooney style. If you watch that clip – think of the all those kids in the scene as the voices in my head! hahaha.

So… granted I was a little scared of the time commitment. Coming up with regular content every week. Keeping it fresh. Dealing with people’s expectations. Dealing with my own expectations (which are always higher). But that stuff aside… I wanted it to at least seem simple technically, or I’d never start.

Google+ hangouts are simple. I already had that down. Even if I had to download the video to add the bumper, title and music… minimal editing beyond that. Right? So that’s how it started. OnAir hangouts are great because they record directly to YouTube, where you can make them private, unlisted, public – and download, fiddle with them, re-upload. Great for the one-girl band and great for guests who live in other parts of the world.

Of course, lighting is key in my world. Life is Light – y’know? Keeping it simple for hangout mode means a couple of desk lamps, the overhead lights and ambient light from the monitor. It’s always worked well, why stop now?  Some kind of interesting background helps too. On our previous show Life Through The Lens (I’ve got a few episodes posted), I used a Shoji screen. It helped reflect light, I could light it from behind also – and create some visual interest. The webcam: the awesome Logitech HD Pro Webcam. That whole set up looked something like this: 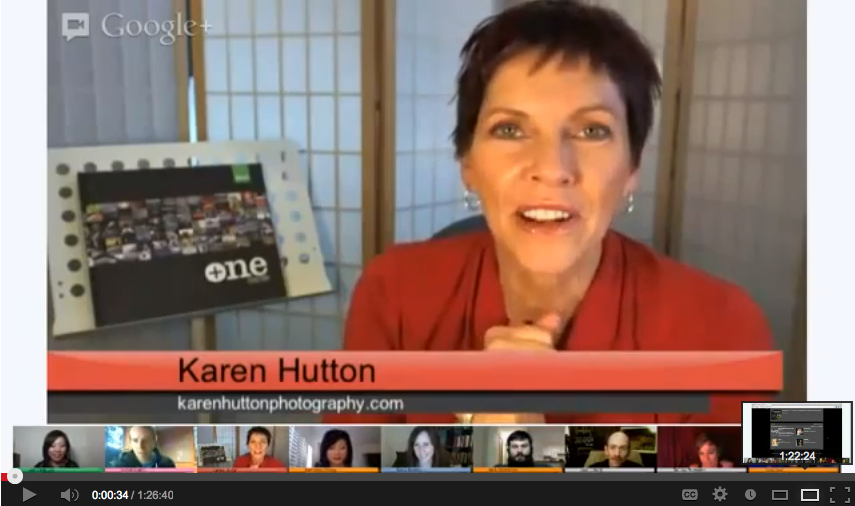 Of course, that was another show and I wanted a different look. Plus, I travel more now – so the set up had to be portable, inexpensive and consistent. Like a pop-up card. I settled on a couple different Studiohut’s collapsible backdrops and a couple of stands for them. Good for starters!

To add to whatever ambient lighting is around,  I got a simple 300 LED light array that attaches to the hot shoe of my camera. I drop that down to face level so it lights up face and eyes. It looks something like this: 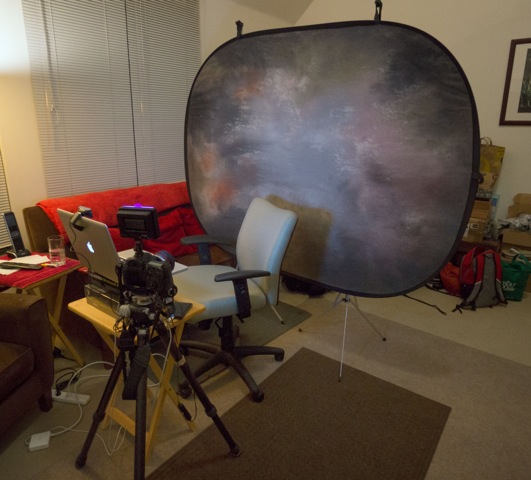 Fancy, right? Heh.  I’ve since upgraded that LED light to this one. I may end up using them both – since overcoming nasty lighting can be a bit of a challenge! But it’s all portable, easy to carry and a snap to set up. I can use it anywhere and achieve a consistent look. Keeping it simple. So far, so good!

I had been using Adobe Premiere Elements for a long time – but now wanted some better capabilities, so on to PremierePro. The learning curve wasn’t bad and pretty soon I was up and running. Initially I thought it would be “garage stye charming” to include everything, mistakes and all (it’s so real!). But in transitioning from the hour-long to the 15-minute format, I realized we didn’t have TIME to muck about… there was plenty of “real” without the gaffes!

The cutting room floor was littered with the fat. Alot of it was me. Jeez, I had to get better at my own sound byte-sized comments! Karen, think short – to the point – keep it moving. I knew it would all become second nature, but making conversational decisions on the fly that meant less editing time and still told the story was challenging! It never goes the way you think it will. It takes alot of prep, being in the flow and watching the clock.

I had a really hard time remembering to watch the clock.

The latest editing addition? Red Giant’s Magic Bullet Looks. I use the Photoshop version of Magic Bullet on my photos… and part of the reason for upgrading to PremierePro was the ability to use it on videos too. I waited for their incredible 24 hour fall sale and picked up the full suite for a song. LaLaLalaaaaa! The first several Chat episodes were NOT post-processed this way, but today’s promo was. In the future… we’ll have to see what the creative muse has in store. heehee.

My first guests are all amazing artists. They are also INCREDIBLE friends who support, forgive and take the leap when asked. I will love them forever for that!! I only had the promos to show them for the overall vibe.

I had to keep emphasizing (for both of us),  “It’s short. Think 8-10 minutes of Meaningful Awesomeoness. And I’ll be watching the clock. But no pressure.” They walked through some fire with me on those first few. A couple we even re-did. But we ended up with great episodes that shared who they are and how they think about – and do what they do.

That’s pretty much it… I do my background study-up on my guests (even on my friends!), prepare my questions – and them, pop up my lights and set – and away we go with a Google+ OnAir Hangout. After that, download the hangout, add bumper and title – edit the chat itself down to time, add a VO intro if it’s called for, render, export, upload, done.

I just wish it went as fast as I just wrote it!

And… me being me… the vision of Chatting on-location didn’t stay as a “future vision” for long! I’ve already got 2 on-location episodes in the can – with another to be done shortly.
It’s a WHOLE other level of super fun and awesome – which I’ll share when we air those.

Where is all this going? Good question. I just know it feels right, all systems in my heart and gut say “GO!” and I’m goin’!