Recently, I attended Photoshop World (PSW) in Las Vegas, Nevada. It was awesome to see old friends, meet new ones – make 2 on-location (LIVE!) episodes of The Chat and… get to visit the Valley of Fire for the very first time! 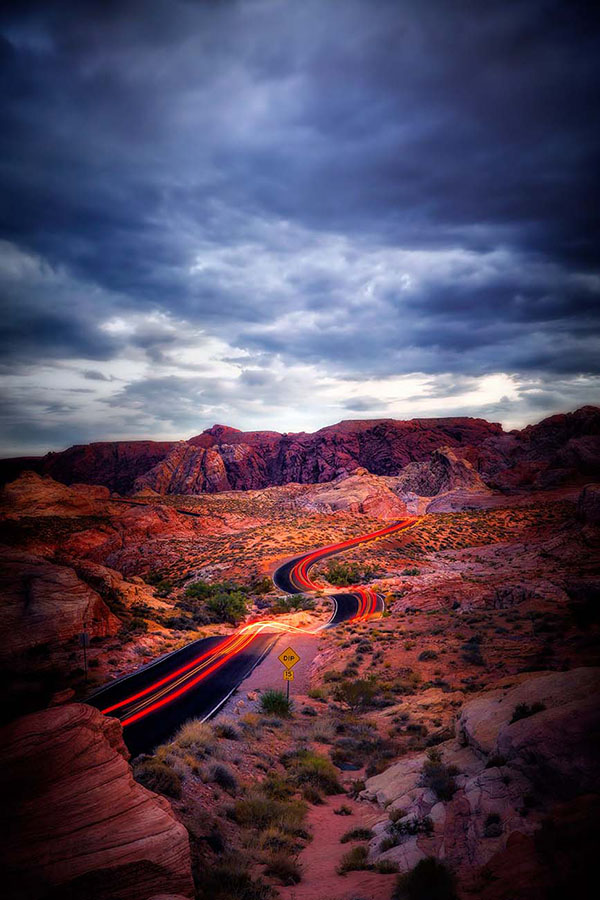 Valley of Fire is a state park in Nevada. I’ve seen some amazing photos from there… and wondered if it should be a stop on my husband Joe and my upcoming “let’s RV the southwest!” vacation.

My awesome friend Barry Blanchard has been there a bazillion times. It’s one of his fave places to visit. All the southwest desert goodness, minus the crowds. Count me in! After all the buzz and excitement of PSW was over, a few of us just wanted to get out in the open air and “take pitchers!” (as Barry always says it when he gets excited about shooting).

Two of my other pals ‘o awesomesauce; Ron Clifford and Laurie Rubin (Barry’s sweetie and one of my BFF’s) were ready to git outta town too – so we all jumped in Barry’s LandRover and headed out.

Ron hadn’t been to VOF either and he was jumping up and down with excitement! He had to board a plane back to Toronto later that night, so this was the perfect way to end the day – and a glorious week. He and I have known each other for two years: we co-hosted a fun show on Google+ called Life Through the Lens for almost a year of that. And yet… this trip was the first time we’d met in real life!! It was FANTASTIC to finally put the huggy squeeze on someone so near and dear to me all this time. It all added up to a moment of perfection as we flew down the road to the mighty VOF.

Barry has shot this spot before. His photos of it are VERY popular on social media and rightfully so! He’s an awesome photographer, period. But he loves this place with all his heart and it shows in every frame he brings home. He’s also the kind of friend who likes to share. He said we simply HAD to shoot here too… so heck, who were we to argue?  Ron, Laurie and I get settled on our perches on the rock… took a couple of test shots… and high-signed Barry, who then took off down the road to make the taillight stream. Then the headlight stream on the way back. Twice!! It was a blast.

I shot this one with my Canon 5DIII, 24-70 f/2.8 lens… ISO 400… f/18… Bulb mode… and just basically held the shutter down for the duration of his drive, for as long as he was visible on the road. LITERALLY held the shutter down, since I forget to grab my cable release out of the car! I didn’t watch the clock or anything – I just adjusted the  exposure so that it was decent for that particular duration.

We had so much fun during the week of the conference – but it was capped over-the-top out there in the desert, doing that thing we all love so much. Hanging out with best friends and “taking pitchers”. I looked around and pinched myself! The Valley of Fire had become the Valley of Friends.

I’ve been a loner in my endeavors most of my life. It makes you strong. But there’s something about now. This time in my life. I’ve met so many of my lost tribe through photography it seems… and a small group of them are now the family of my heart. They do things like go out into the desert and show you where they took their “money shot”, kick your butt when you need it, hold your hand too, share the hotel room converted into a video studio (where they stacked 2 beds stacked on top of each other to make room for a set!), don’t hesitate for a second to be a guest on your show, celebrate your birthday HUGE, .. and when you look into their eyes, you know they just “get it”. It’s pretty much awesome².