I keep saying I don’t shoot panoramas, then I go and shoot another panorama. Like this one, of the Manhattan skyline taken from Queens. It’s not the hugest panorama ever created… 115,000 pixels across… but it’ll fill up a decent-sized wall nicely.

It happened pretty much by accident too, which is one of the best things about it!

It seems like minutes ago that the hubs and I were in New York. But it’s going on a couple of weeks now. Sheeesh! Time flies!
One evening, we went with Joe’s kid Caleb – who’s a badass drummer – to one of his gigs over in Queens. It was fun, at the L.I.C. Bar. That stands for Long Island City, which I guess is technically where we were.

It was a lovely, warm night… and we’d gotten there early. Caleb was all set up and ready to go too. He looked at me and said “There’s a really cool view of the Manhattan skyline at the end of that road”… pointing to that road… “Wanna see it?”

I said “Sure!”, thinking “What does the kid know about great views?”.
So he walks us down to this little park at the end of the road and my jaw dropped. Dropped, I tell you! Hit the ground. Full on gapeage.
The sight was spectacular! Of course EVERYONE photographs the Manhattan skyline, but I wasn’t about to let THAT stop me!

I thanked Caleb profusely (my respect for his artistic eye skyrocketing) and set about capturing this breathtaking vista.
It was a little before sunset, so I had a chance to scope for a bit. Then I went to town.

Close up, Far Away – Covering the Gamut

I photographed wider first, then as the sun started to create cool reflections against the buildings, went for color block close ups like this, which I shot with my Canon 70-300 f/3.5-5.6:

And generally covered every bit of the scene at different focal lengths, different compositions.

Then I hustled back to C’s gig. It was only an hour and I wasn’t about to miss it!

Random note: I discovered a beer at L.I.C. Bar called Schöfferhofer Grapefruit Hefeweizen that I absolutely fell in love with! I’m not much of a beer drinker, but lordy, I could get used to that one!

But Then… the Night. Yummmm!

Gig done, sun was down, moon was up; Joe and Caleb wanted to go get a beer elsewhere. We ended up at a really nice bar at that same park I photographed in earlier. And guess what I saw: 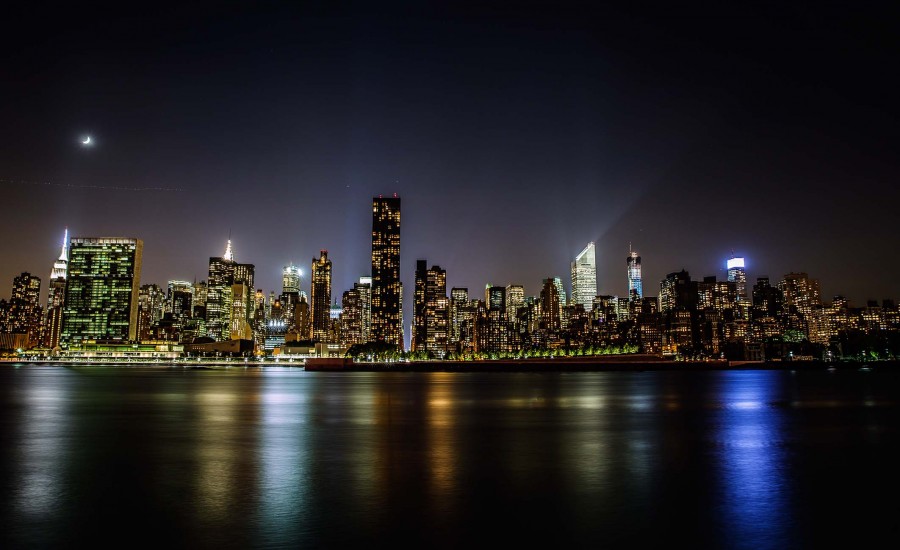 and when I looked to the right, this (same lens):

.. and then I thought to myself: “Self. This would look amazing on a wall BIG.”
Self agreed.

So we photographed that sucker BIG. Made a nice panorama, 7 images across… complete with the moon, the reflection, the river, even the plane with its long exposure streak. (I could’ve eliminated the long exposure streak. But I like it. It makes it so… that moment.). Used that trusty 24-70mm f/2.8 with my Canon 6D, which is phenomenal at night! (which was also the reason I brought it)

So, I don’t know what to say about panoramas anymore. I guess I do them occasionally! HehHeh.