My UP band said: 25,900 steps that day. It also said “17.1 miles”, which I don’t believe… especially since I never calibrated it. I hear calibration is key for reliability in mile measurement, though I’m honestly no expert on UP bands, only on walking.

MY POINT IS: we’ve been walking ALOT in NY! In so doing, you get see the light as it changes from hot to Awesome right before sundown. It’s different here… and creates an amazingly cool effect as it bounces off the buildings, especially if the building has red in it. I’m mesmerized! And of course, have to stop and shoot it down every street we pass! 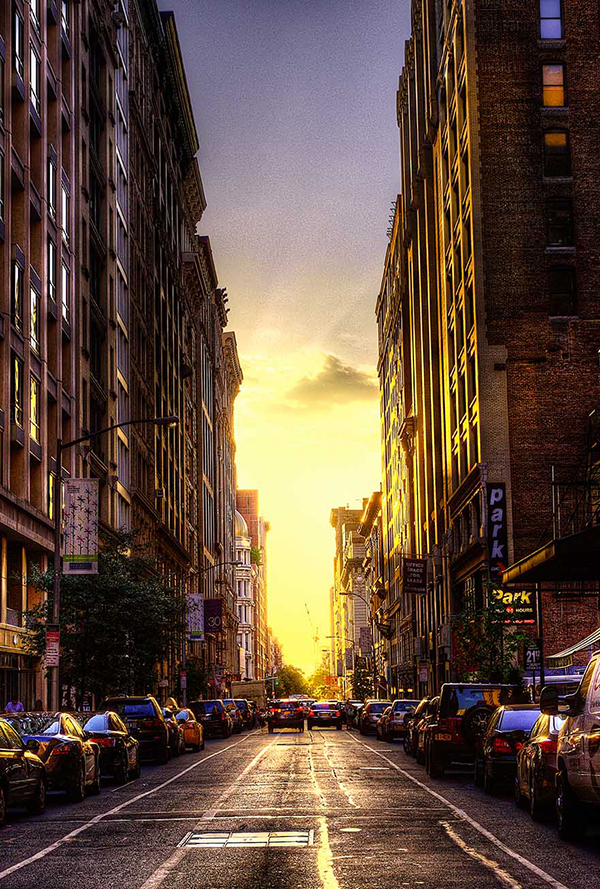 When Gritty is GOOD!

Yep, it’s gritty. I processed that way on purpose. Yes, there’s grain in them thar pixels… just like there was in my eyes. Heh. My eyes were literally watering from the blowing dirt as I took this photo. It came out “animated film” too – which also captured the mood perfectly, to my (watering, irritated) eye.

Since I was shooting into the sun, I shot it as an 3-shot HDR. It’s also hand-held, since frankly even my small, travel tripod is too heavy to haul around all dang day. So I’ve gotten good at holding steady for 3 shots! It means I sometimes shoot at higher ISO than usual, but that’s been OK. I brought my Canon 6d, which is doesn’t need as high an ISO as my 5DIII does at lower light. The images are also better when ISO’s do go up. Then… 3-shot HDR’s only. I can stay still all day for 3. It’s worked out well!

Then… I always use Photomatix for my HDR processing. Then I then go many steps of blending back sections of original RAW images to get a nice clean base… then work with that to its final effect. In this case… I loved the Photomatix image so much I only cleaned it up some, ran it through a couple of plugins to enhance certain aspect and called it good. As I said, I liked the gritty effect and steampunk-ish vibe.

Just another moment from an amazing trip in an AMAZEBALLS city!