By this image, you could easily think I’m in some dark, “tortured artist” phase. But mais non! It is not true!

One of the really cool things about photography is how you can stop time. We we all love the notion of frozen moments… captured for all eternity. Or at least until the digital file goes corrupt, rolls over and dies with its little legs stiff in the air like a cartoon stick figure death. Which hopefully that happens in some mythical  faaaaar off  distant future. But I digress… 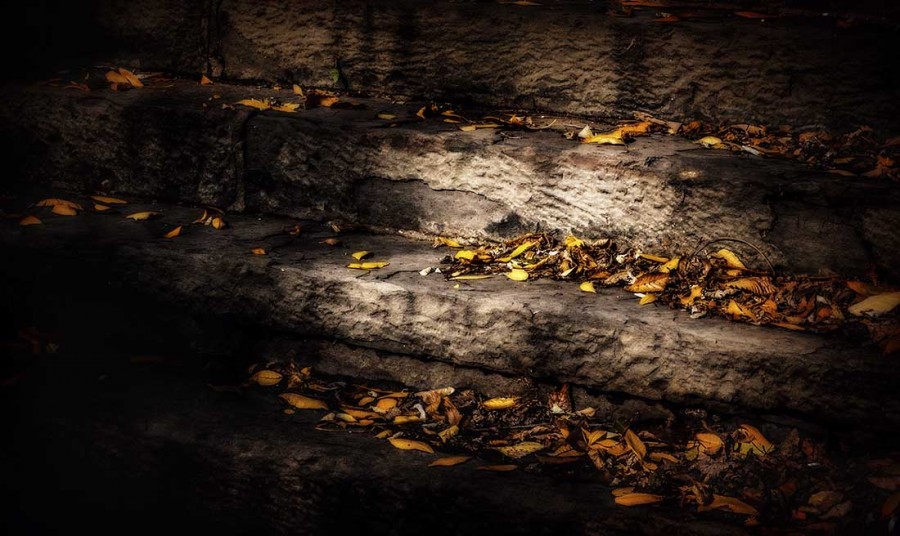 For me, capturing a “moment in time” was only ONE of the lures of this simple little photo;  the autumn leaves, the hand-hewn stone steps leading… somewhere… the dappled light.

See, details create intimacy. Like memorizing every line, hair and curve of a lover’s face. And as innocuous as ‘leaves on steps’ may seem… when I look at this image, I’m THERE again, in every detail. The biting wind, the NYC Marathon going on a couple of miles away, thinking about my friend who was running it, the drone of security helicopters over Central Park where the race would eventually finish, the feelings I had about having a morning to simply explore, no appointments to keep or people to answer to. And in the next gust of wind… that exact arrangement of reality… gone. Ahhhhh, moments. String them all together and it’s your life!

But there’s more… and now you’re going to think I’m morbid. It relates to my post-processing choices with this photo… because they further defines “the moment”.

Have you ever almost fainted? I’m talking about that moment right before the lights go completely out – where the edges of your vision go dark and all you see this ever-shrinking circle of your reality selection – which you focus on for all you’re worth, in an attempt to not actually succumb.

I keep saying “you”, like this is all hypothetical or imaginary. Sneaky, huh? hehheh.

Back when I was just learning to work on camera (I was a professional actress for a time, many years ago.)… standing in front of the camera made me SO. FREAKING. NERVOUS!! I was taking an on-camera acting class in San Francisco with a very well known director of commercials. Theatre was my real passion – but I needed a paycheck. Doing TV commercials was my solution.

The routine in class was that you’d get a script, learn it, work out the delivery – then stand in front of the camera and give a full blown performance. The room itself was black. It was this director’s actual studio and in between commercial shoots, it was all stripped down to its film studio requisite black floor and black curtains with only a few chairs strewn about.

Problem was, every time I stepped in front of the camera – I’d get so scared I’d feel faint. I’d never felt faint in my life before, so it took me a few times to realize what that sensation was, but yep. Faint.

One evening, faintitude happened so dramatically (what, me dramatic??) it felt like I was standing in a dark tunnel, being pulled backwards… the baleful eye of the camera, the director and the class all disappearing into an ever-shrinking circle of silence. In that strange way your mind can multi-task, I was so fascinated by watching this whole process, that it wasn’t until the circle itself started to fade that I realized that in a very short few seconds I’d hit the deck if I didn’t do something.

At that time in my life being embarrassed was worse than death itself … so survival kicked in and I clawed my way back to full consciousness, heart pounding. No one ever knew what had just happened but me. I think they thought I just kind of sucked as an actress (success was my ultimate revenge), But I’ll never forget what that “final moment” looked like.

So now, whenever I think of conveying a “moment in time” … post-processing usually leans toward being either all dreamy-like… or that darkened edges/last-thing-you-see-before-you-black-out sort of approach.

Of course, I usually take it further in my imagination… it’s the final instant before our beloved main character dies, and he remembers seemingly disparate and yet strangely defining moments in his life. Or that poignant moment where our heroine stands at a crossroads in her life, memories flooding her mind, all driving her toward her defining “Next”. These moments are like pinpoints… they are mini-realities, yet full-blown and laden with meaning, isolated by consciousness & time… conveyed with a tunnel-like stroke of darkness.

One image, many thoughts. Lots of words to convey something so simple… yet so packed with details and meaning that you just wish thought-conveyance were an option! hehheh.