What Was Your Favorite Part?

People have been asking me what my favorite moment was in France. I just can’t answer that! Honestly, there were so many “favorite moments”; all leading up to some major “aha’s” in my life. (They’re going to take some time to internalize, too.) It’s like the entire trip as a whole was my favorite moment! Plus, the month happened in chapters, each unique and amazing. For instance…

One really super cool thing was traveling about the countryside toward the end of our trip. I LOVED that. That’s the ‘real’ France. Major cities like Paris are awesome. Not-to-be-missed. But if you want to meet the real people, you have to get out into the heartlands. In this case, though – it’s HOW all that happened that was so cool…

Social Media For Good & Not Evil

When this trip was merely a glimmer in my eye, a retired American gentleman named Mike Staubes who follows me, Trey, Thomas Hawk and other friends got in touch. In effect, he said that he’d been following me for years and knew how much I liked Paris. He extended an invitation: come, bring the hubs and stay at a home he was moving to that had extra bedrooms. The price: simply go photographing with him.

Now in years past, I’d have run screaming from an offer like that! I mean, seriously. Only deranged people would contact you out of the blue and invite you to come stay at their house, right?

But nowadays, a number of my traveling photographer friends do this. Some even put the word out on social… hey, I’m traveling to ____ (fill in the blank)… anybody got a spare room? (They’re also young and will sleep on a floor. ha.) I’ve seen fast friendships formed this way, so I thought about the offer. Talked to the hubs about it. Checked out Mike’s G+ profile and posts. Did some other reserach. I mean, you can learn ALOT about a person before you ever establish contact with them these days.. there is no hiding anymore!

He passed muster at this layer, so I reached out. Emails went back and forth (you learn even more about person corresponding with them). Long story short – all systems go. We started working out a plan to hit the country roads of France for some photography and exploration during my third week in France, when Joe-the-hubs arrived.

Cut to now: Mike is our new, trés awesome friend. 😀 We had the BEST time on our road adventure!! In the 3 or 4 days that we all spent together, we explored areas we’d NEVER have seen otherwise, out in the Normandy countryside. Mike knew some of the places to go… then we just wandered around and found the rest.

We saw Mont St. Michel. Stayed in a tiny town called Courtils. Visited Honfleur in a rainstorm and did a Virtual Photo Walks sitting in a harborside cafe snacking on cheese, bread and red wine. Sussed out spots that probably few people would find… all amongst laughter, camaraderie and a love for photography. Mont St. Michel was our furthest-out point, but we had enough time to simply explore our way out and back.

I’ve never experienced anything quite like it… from the way it all came about, to the actual miracle-laden experience of it… to the fact that we have a new friend France that we’re already planning to visit again.

Scenes From The French Countryside

One of the many places where we stopped was… ummm… I’m not sure where this was! Seriously, you just drive around, see a place that look interesting and you stop. This was one of them. It was a woman’s home… who was so proud of it. We had been photographing around the outside, but there was this shed full of old equipment that Mike wanted to see, so he knocked on the door and asked the owner if we could photograph it. She said yes… then proceeded to show us the before and after photos of the renovation she and her husband had done on the place. It was staggering what they had accomplished!

She also asked that we not share location nor too much about the place. No magazines! 😉 Out of respect, I only share this one small view – and in the spirit of giving you the feel for the loving care and pride folks take in their old-made-new homes. It was another world! NOTHING in the U.S. is like this… the country itself isn’t even old enough! 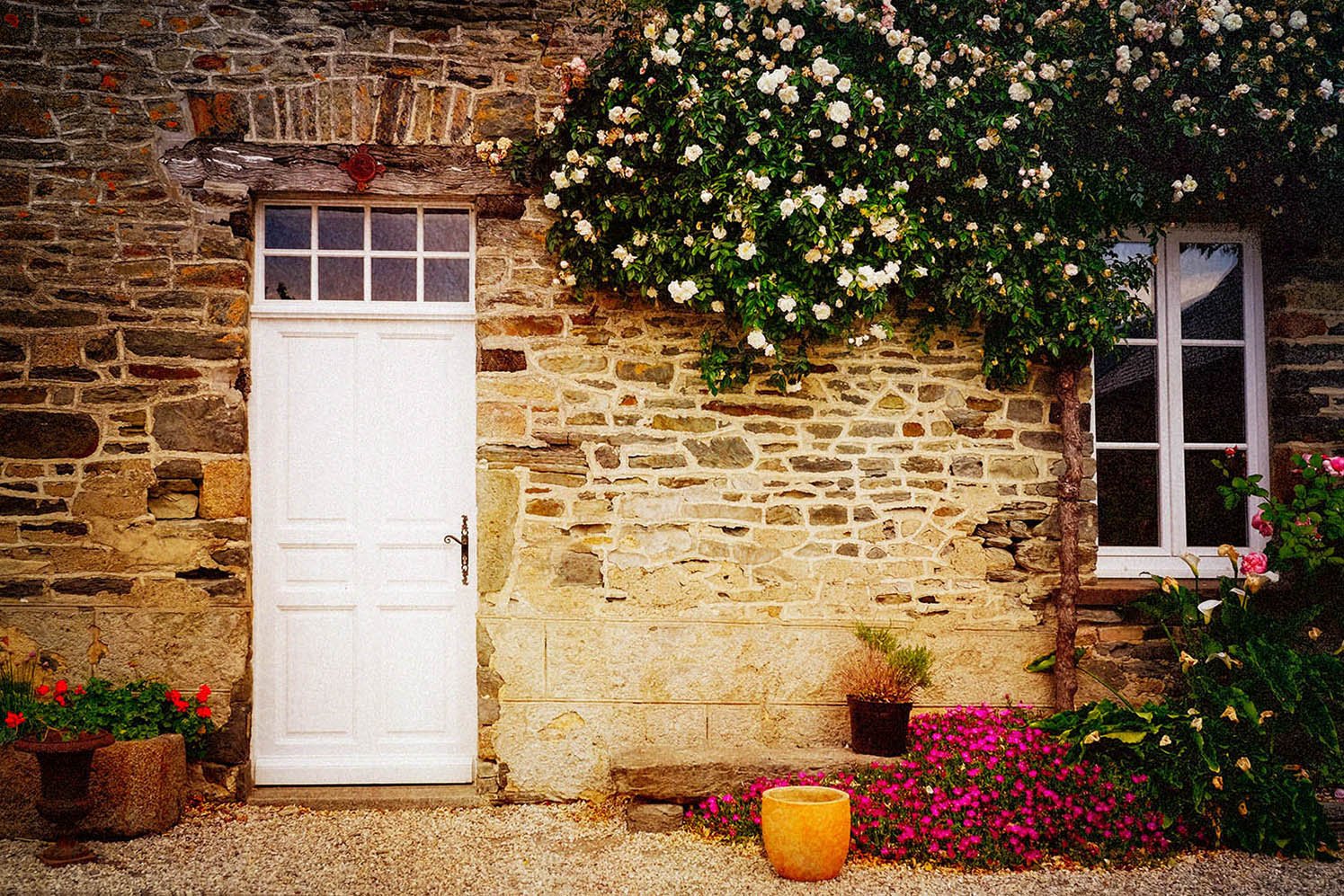 Flowers from her garden, which she was so proud of.
This one’s SOOC, by the way… Fuji, of course. Velvia film simulation. 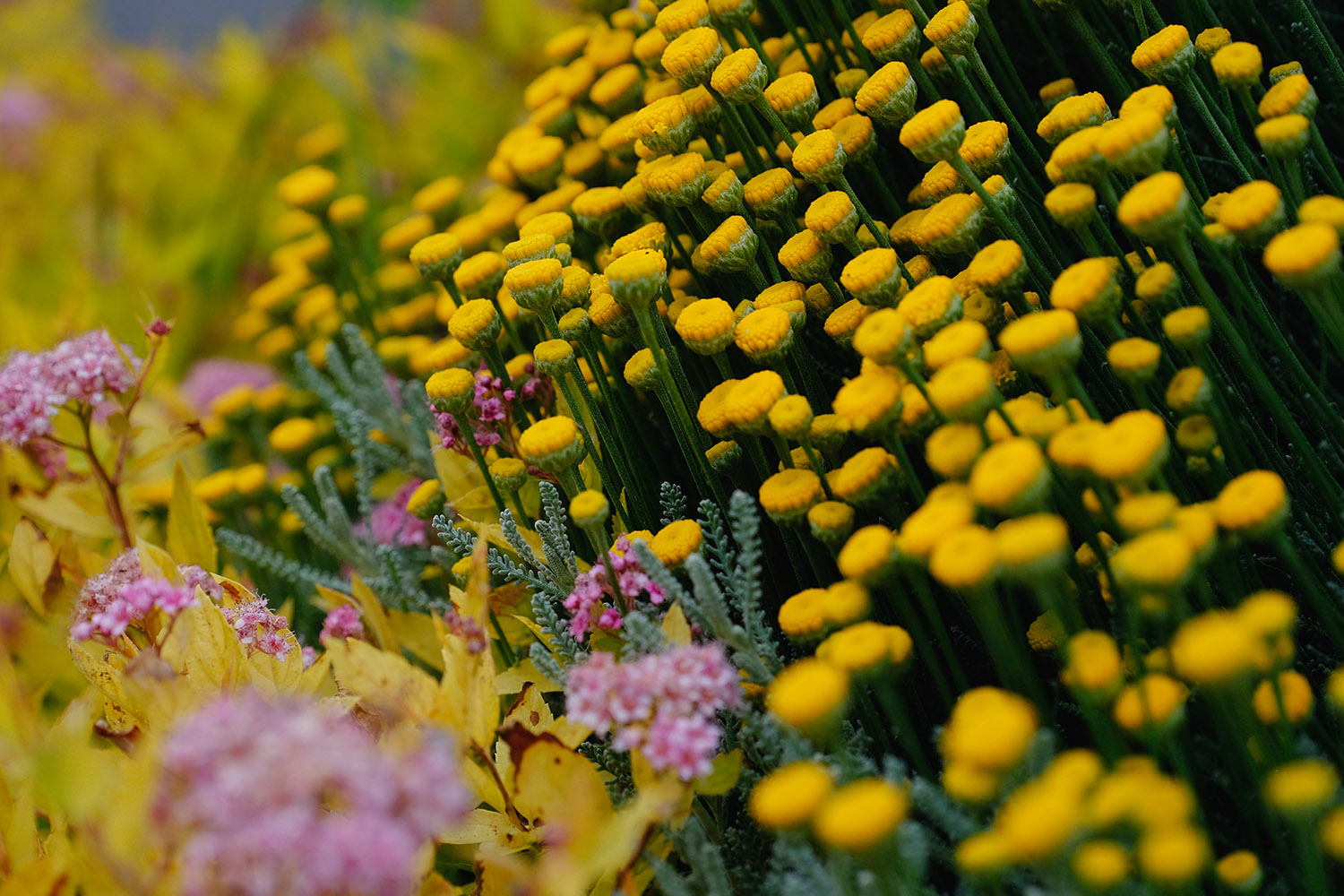 Here’s another little country home we spotted as we drove by, slammed on the brakes and jumped out of the car to get a better look at.  I bet these places have been in families for GENERATIONS!! Literally hundred of years. I don’t see how you could buy them anymore…

Mike asked this owner if we could photograph here too. She was a bit more suspicious… but still let us in. Only in the front! We we not to go around back. She watched us from a window for awhile, probably to make sure we weren’t up to anything bad. That’s Joe up on the terrace… gives you an ideal of the scale of the joint! 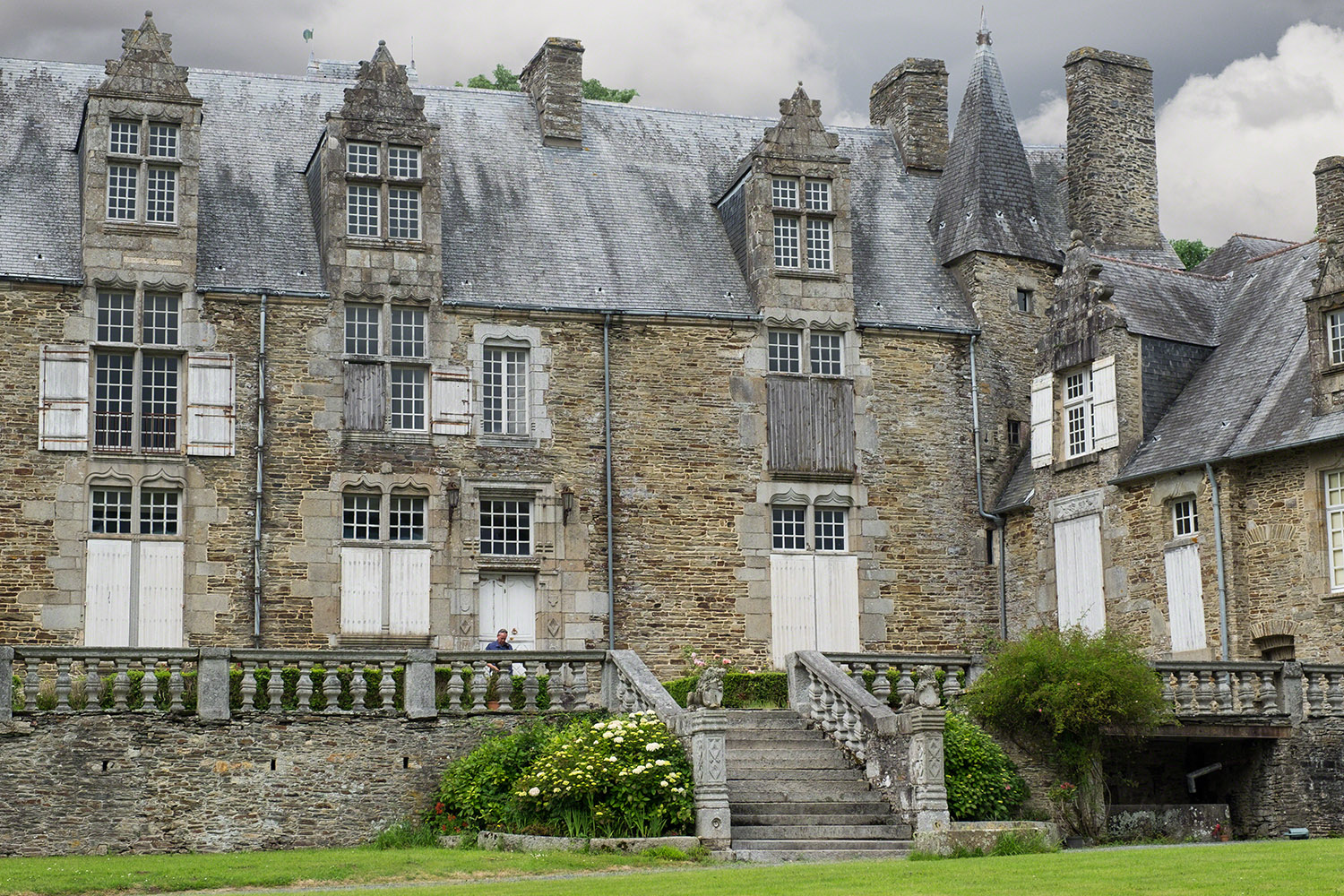 The following series of 3 cracks me right up!
When we left Honfleur, we drove around the area, looking for cool and potentially unique spots to photograph from. Mike drove up and up and up… and we unexpectedly landed at the top of a hill overlooking the town. However, the only spot to park was someones’s driveway. Luckily, the place was for sale and no one lived there. Wanna buy a Tudor style home overlooking Honfleur in France? 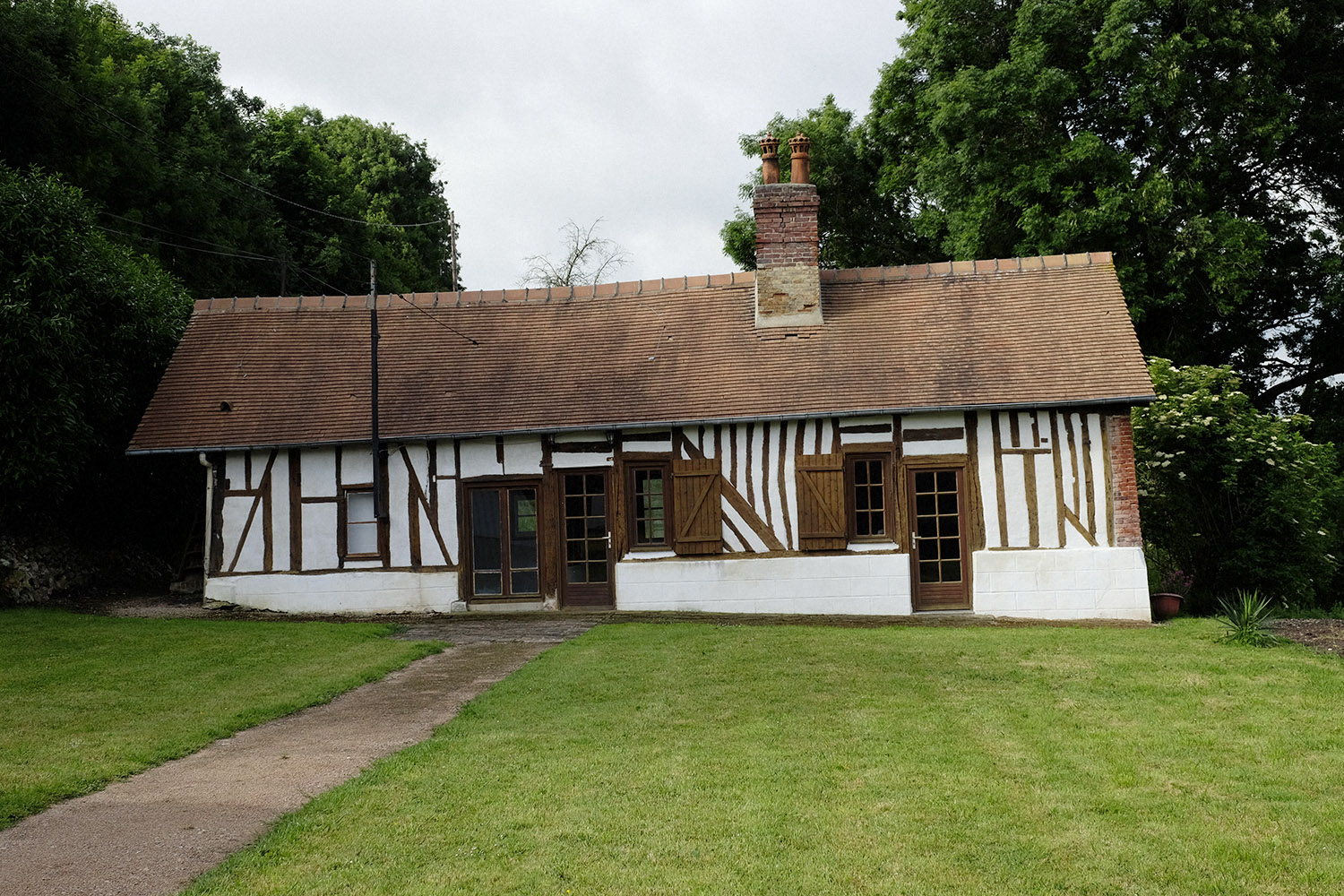 It comes with it’s own welcoming committee… 😮 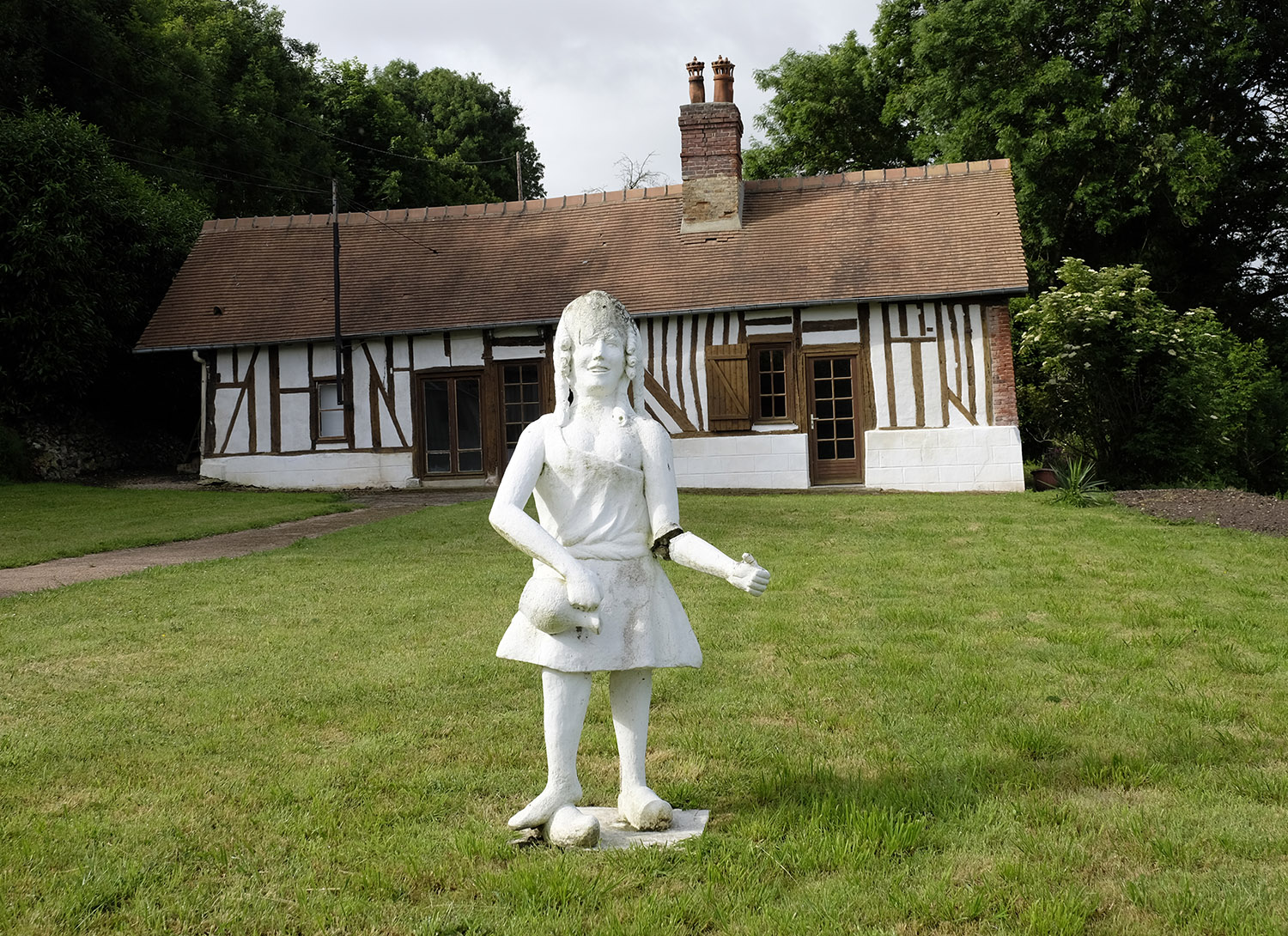 Who’s like something out of a horror movie! You know, where the statue is a statue by day… then comes alive at night. ACK!! (sorry in advance if I just offending anyone… but, as I just said… ACK!) 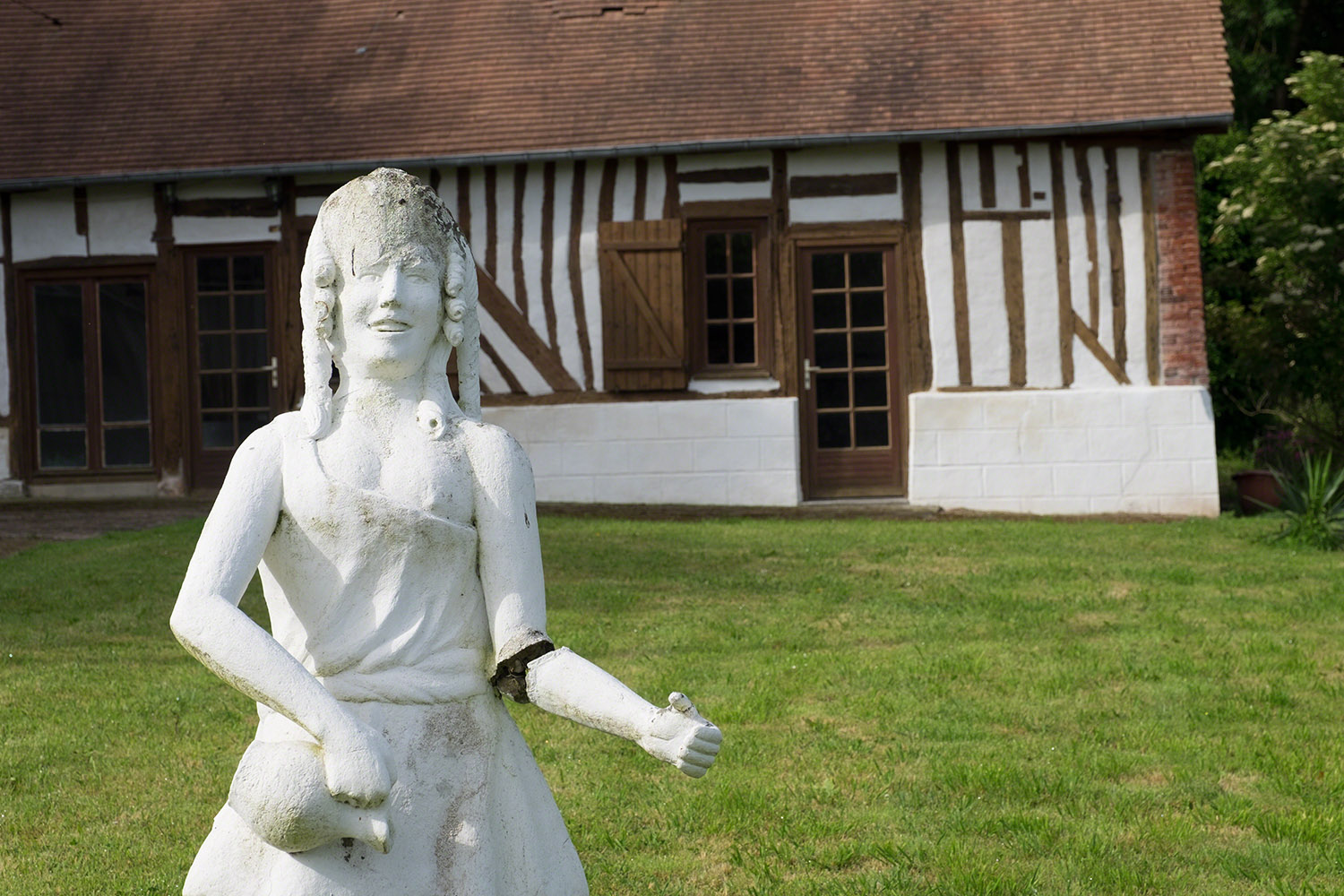 Every little town has a church in the middle of it. They all look pretty much the same… mini Notre Dames! Back in the day (like, hundreds of years ago) churches would set up, villages formed around them, ostensibly for protection from both the seen and unseen. So all of the little towns you drive through have a church in the center of them, spire and cross towering over all.

Not all are in good shape. This was one whose spire we espied from afar. When we got there, we discovered it was undergoing renovation. It was a beautiful old place, but had definitely seen better days. You couldn’t walk amongst the pews without fear of falling through the boards. Tiles were falling off the walls… the floors tiles were broken in many places. Workmen were there and didn’t mind that we wandered around with our cameras. It was a little eerie. And it made me want to visit it again when it was all done. 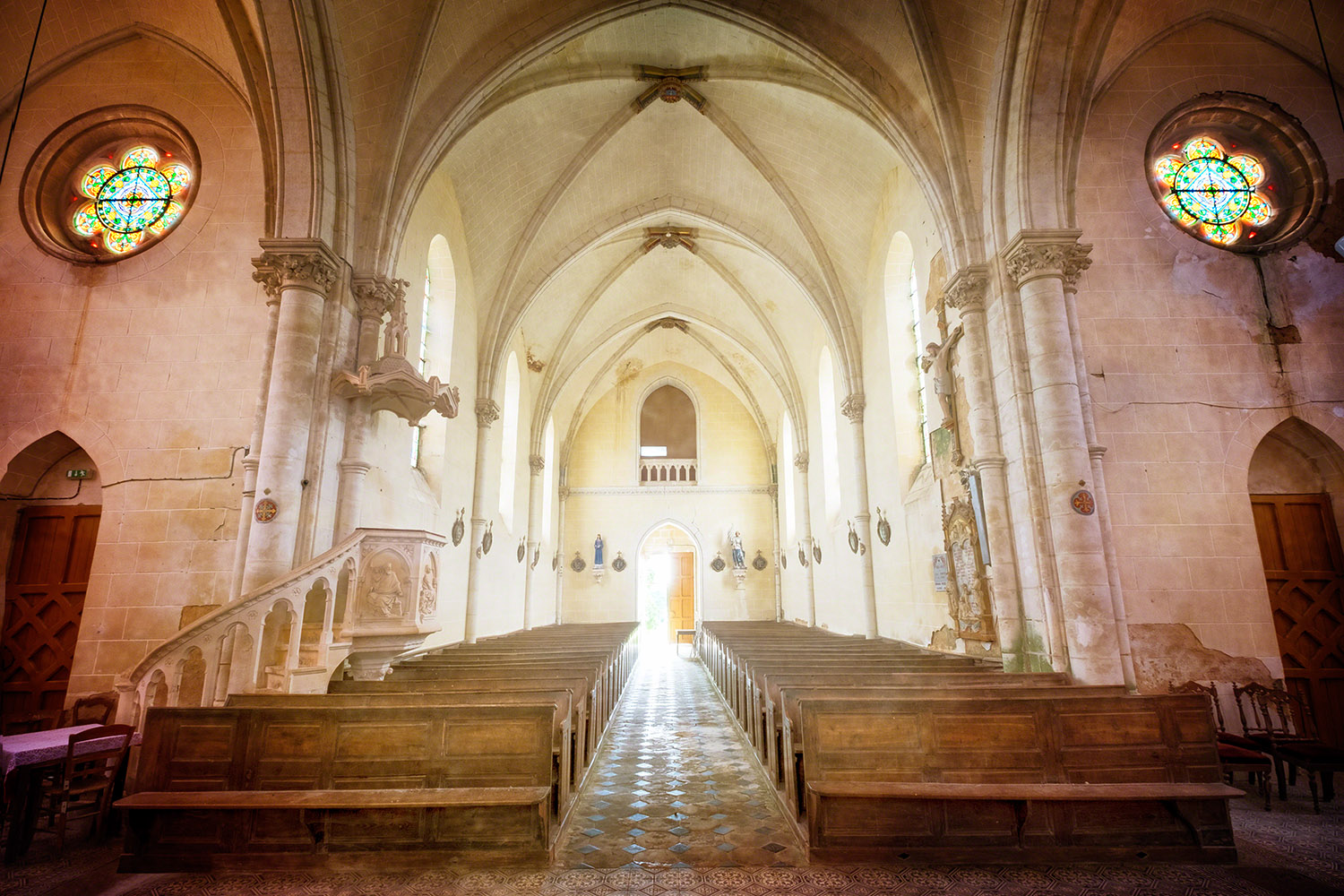 Traveling around the countryside means you MUST capture the countryside itself. Literally! I loved the grains they grew there… and being the beginning of June, the greens were just starting to turn golden. A gorgeous combination. Coupled with the icelandic poppies that grew intermittently within them… I couldn’t stop finding awesome compositions that remind me of the site and aroma of it all… 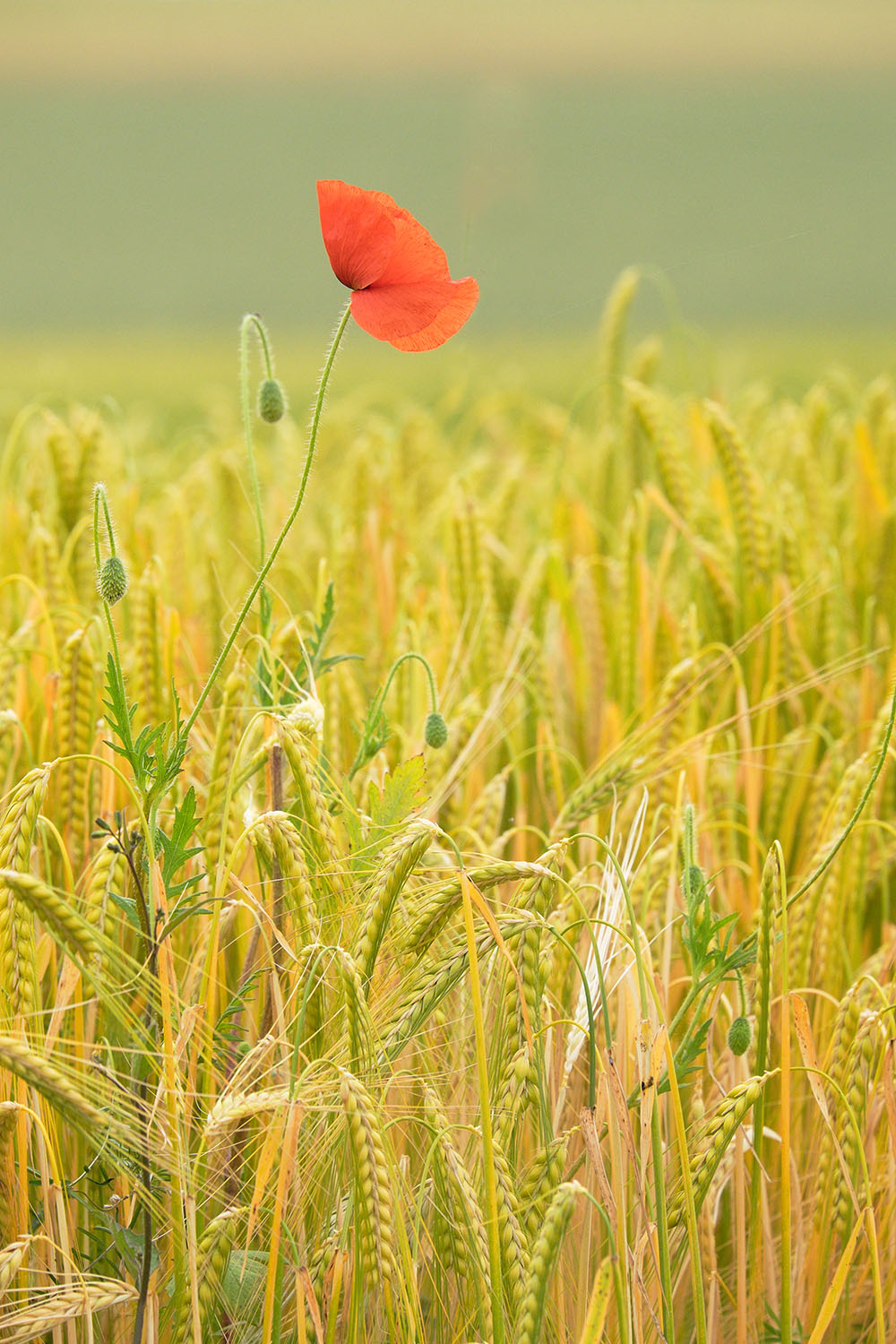 This is just one of many images from Honfleur Harbor. It rained like crazy all day! So much so, that the Virtual Photo Walks I wanted to do from here was spent in the cafe you see right there on the corner, “Le Maison Bleu”. I just chatted with the gang over cheese, bread and wine… while the rain poured down… and we talked of many things. It was like a scene from a movie! And so nice, even though we couldn’t be out.

Miraculously, the rain stopped just in time for blue hour. So I grabbed my tripod and camera (it was around 10pm at this point!) and ran around scooping up pixels like these… 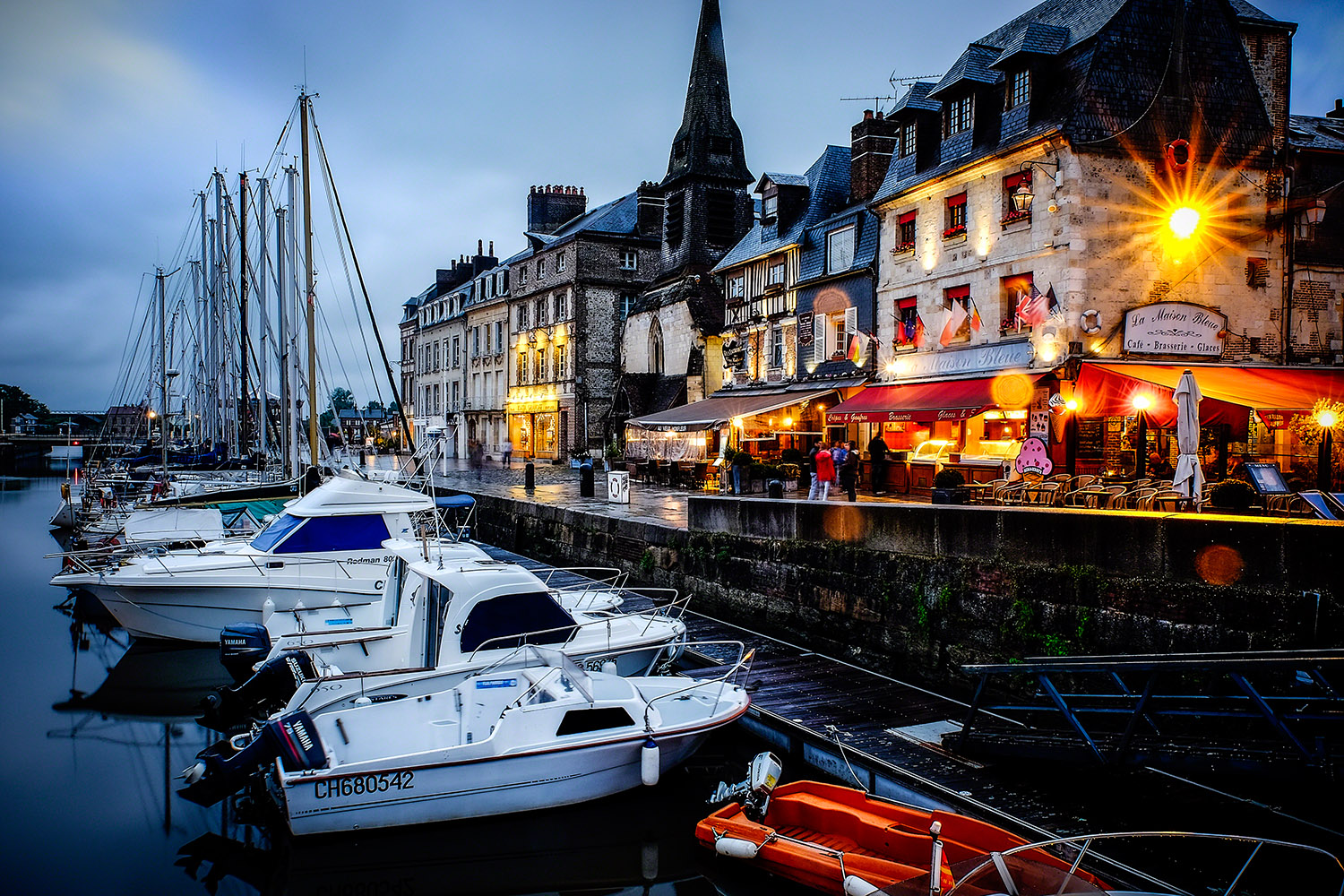 Leaving Honfleur, we traveled over the Le Havre Bridge. You can stop, stretch your legs and stroll over the walkway that crosses the freeway. It’s so much fun to photograph, I made Mike… then hubby Joe and Mike… pose geometrically for me. 😀 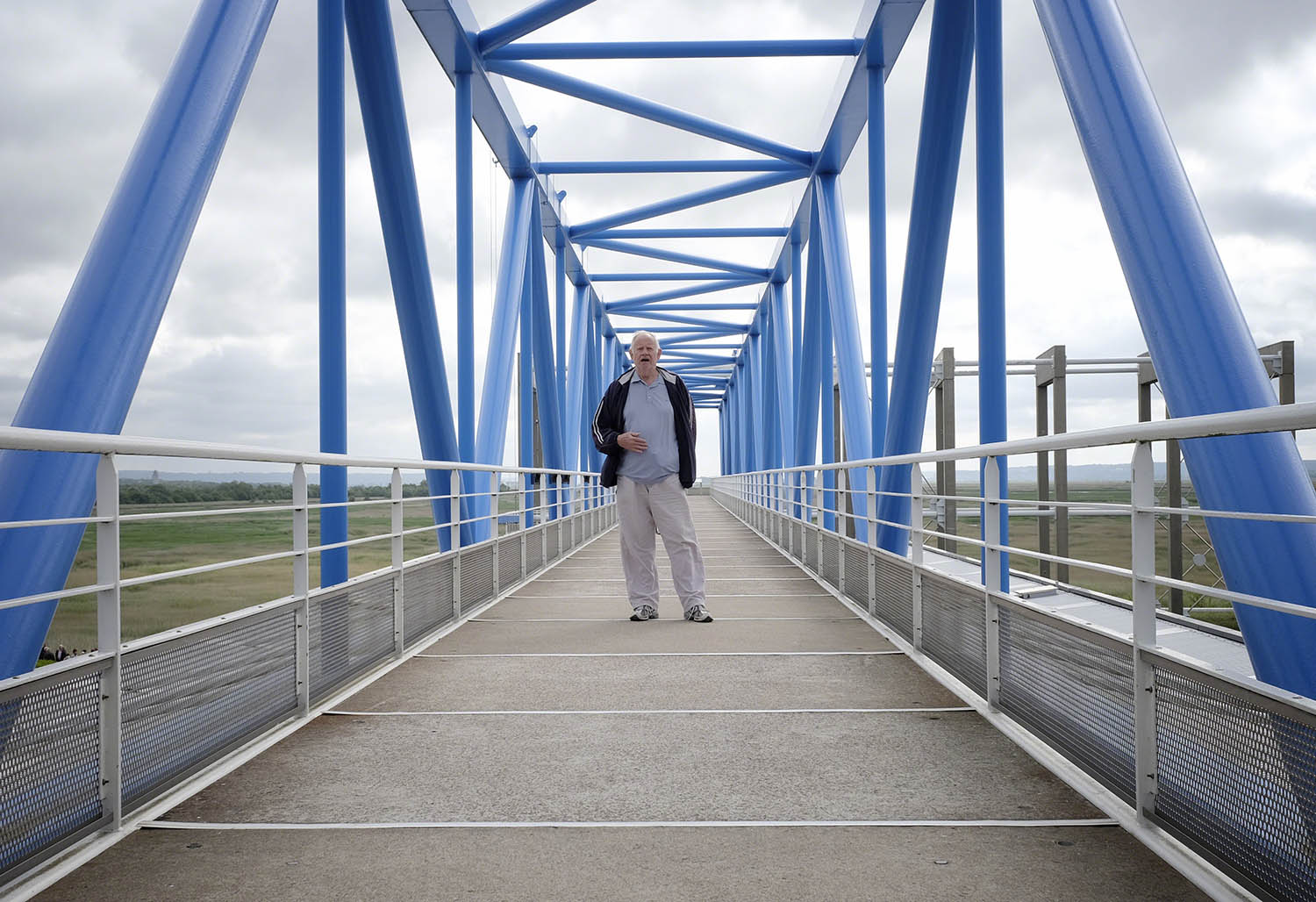 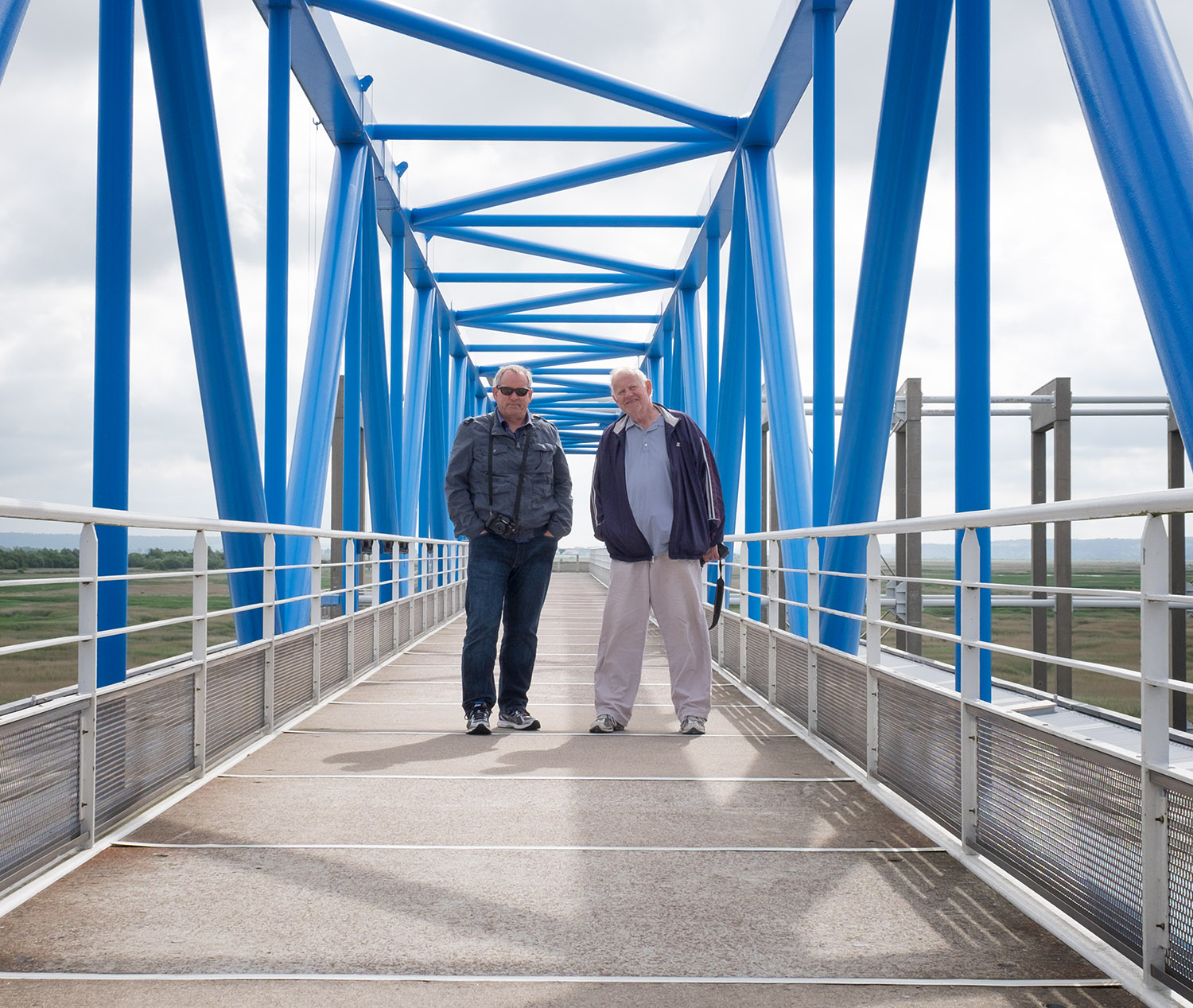 Here’s Mike in the Abbey at Mont St Michel… where he and I made a record-breaking speed run through, just keeping ahead of the tourist groups bearing down behind us! This was his one moment to catch his breath. heh. 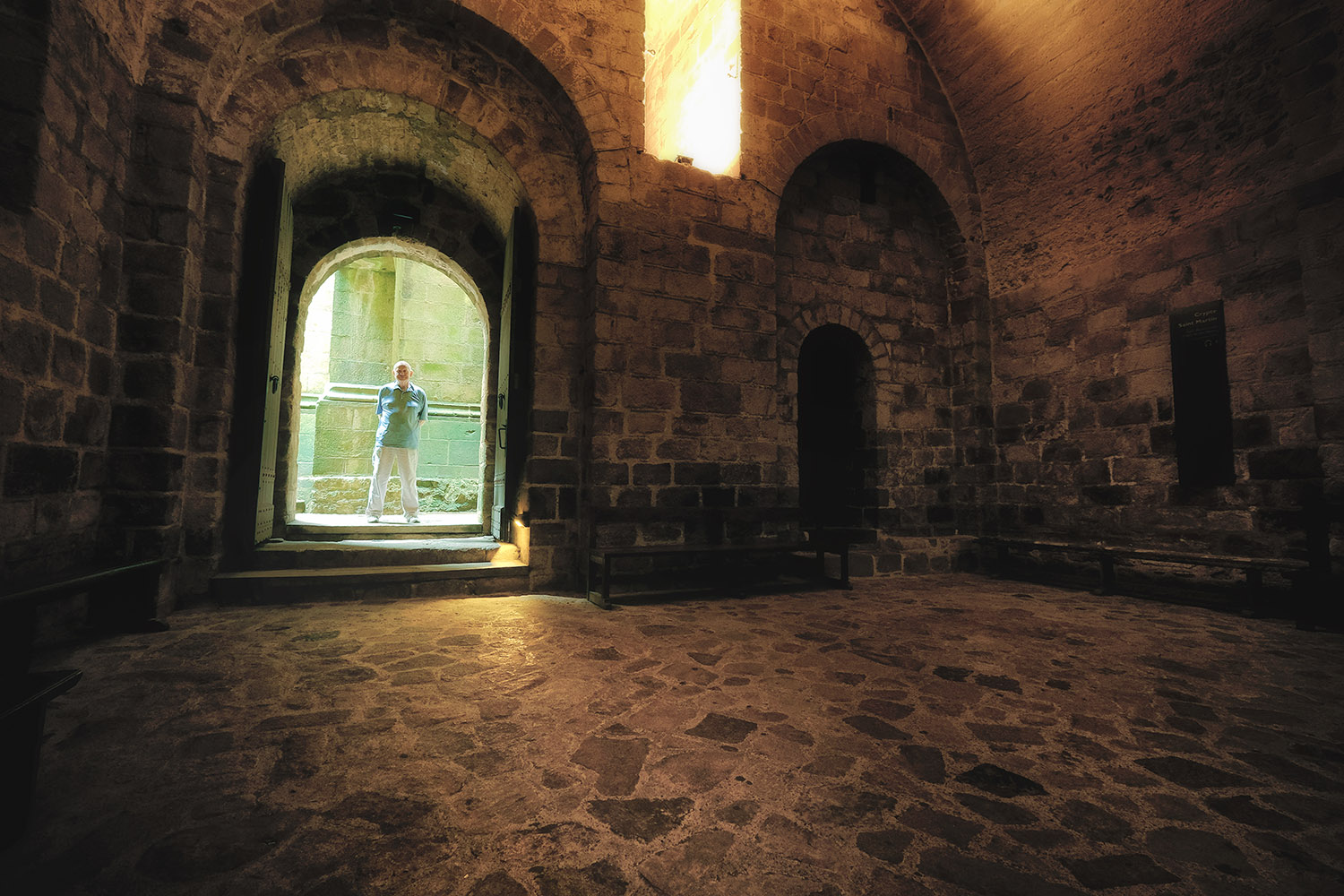 Something else that happens when you meander around the general Mont St Michel area… views like this one suddenly appear! This was the night before we stayed on the rock… talk about an exciting preview!

Mont St Michel was a chapter unto itself… we’ll talk separately about all that… so consider this your own exciting preview! 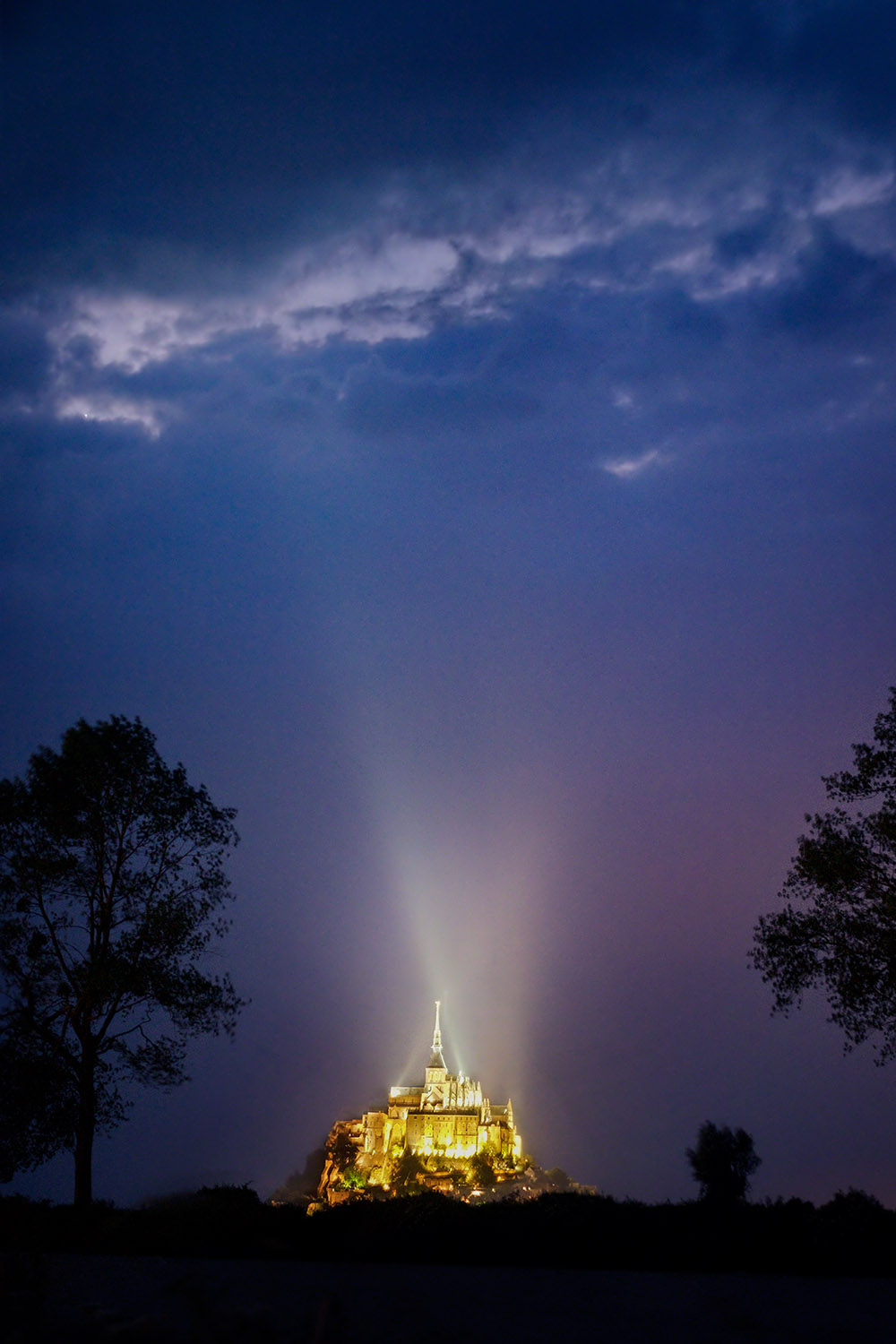