What Do You MEAN, What’s My Name?

I’ve had a bee in my bonnet to see the Paris Opera House ever since we missed seeing it when we were here in 2010. This day was a good day.

The place seems to have many names; As Wikipedia explains it: “The Palais Garnier is a 1,979-seat opera house, which was built from 1861 to 1875 for the Paris Opera. It was originally called the Salle des Capucines because of its location on the Boulevard des Capucines in the 9th arrondissement of Paris, but soon became known as the Palais Garnier in recognition of its opulence and its architect, Charles Garnier. The theatre is also often referred to as the Opéra Garnier.” And ummm… also known as: the Opera National de Paris.

Oh, how I love a place with identity issues!
Not to mention its very own Phantom of the Opera.

Digression aside… I got my wish on this trip. Woot! It was low-key.. I just happened to be in the ‘hood and thought I’d see if I could get in. I not only walked right into the joint, there really weren’t tons of people inside. Score! I grabbed an audio tour and took off, cameras in hand.

I was carrying both my Fuji XT-10 and 16-55 f/2.8  and XT-1/55-200 combo that day – nothing super wide angle or anything. So, I decided that if there was a vista wider than the lens, I’d just shoot panorama. Hand held. High ISO. ‘Cause I could. I was REALLY curious to see how lady Fuji performed at higher ISO’s – and there were plenty of opportunities for that at the Opera House.

Like this one, for instance: a 9 or 10 image pano, hand held, ISO 6400. I just wanted to try it, it’s not like I planned weeks for this moment or anything… I just liked the view and perspective and wanted more pixels than the pano I also took on iPhone 5 gave me. So I went for it…

That done, I wandered on through the self-guided tour, photographing along the way. No tripods allowed, so I went with the flow. I figured it gave me a chance to just be in the moment, see with my insides, paint some pictures. Plus, everything was low light, so that was a fun test of my camera gear in those conditions.

But then… oh then, my friends… I stumbled onto a scene that set my heart a-flutter. In Le Grand Foyer, there was a film crew, setting up to shoot a video project. To this day, I don’t know what it was for. Thing is, would’ve been quite dark had they not been there, so I was stoked they brought lights. SO considerate! 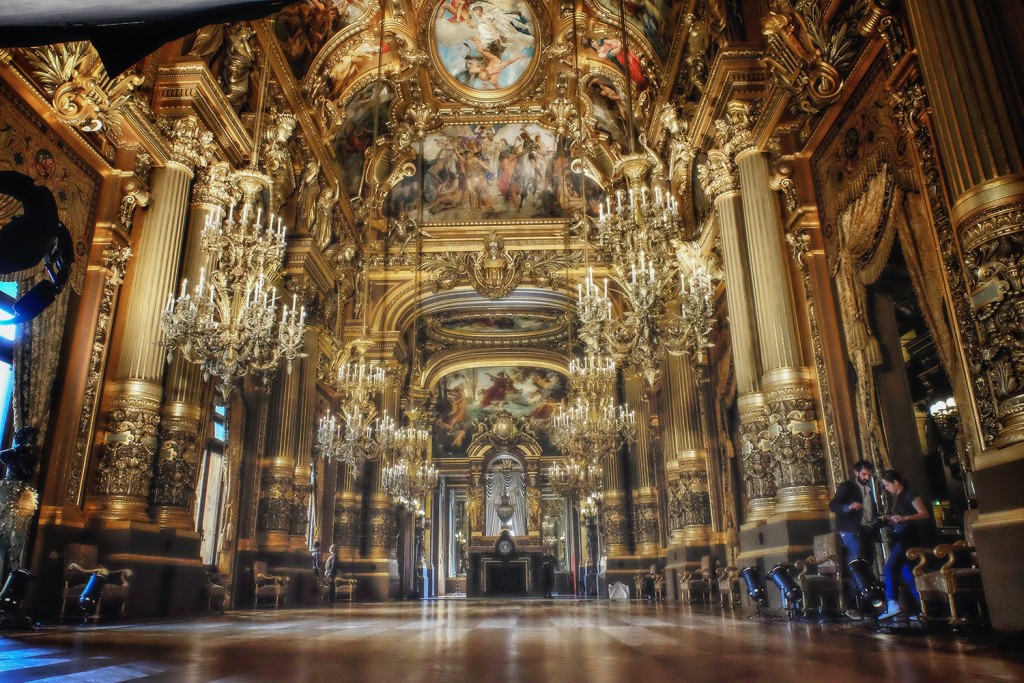 Set up was still going on… I couldn’t believe they even let us stand there while they worked! 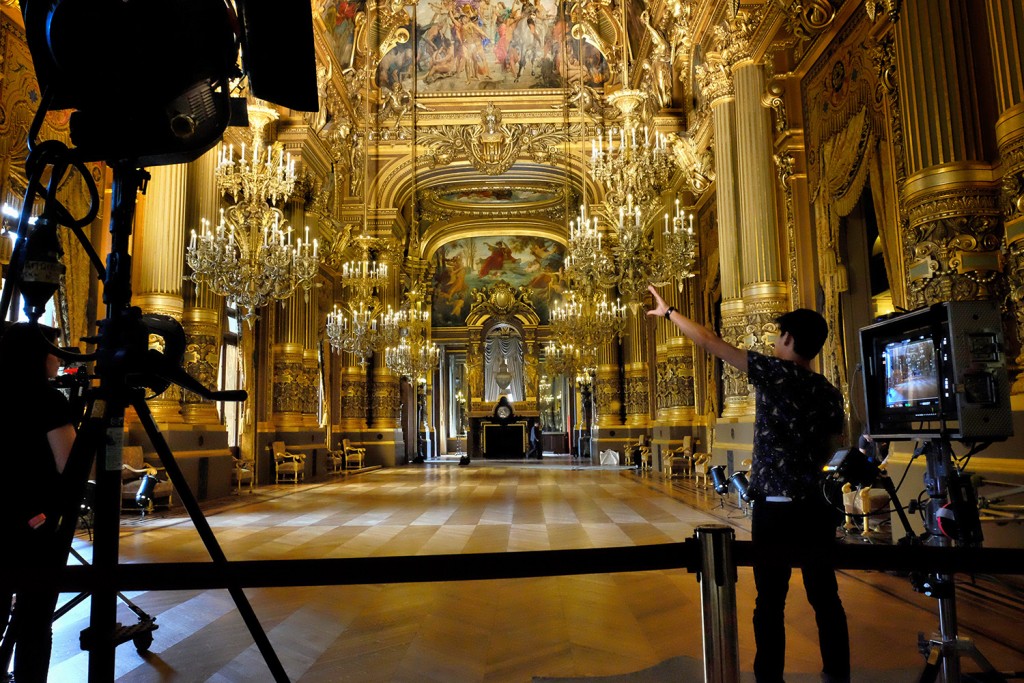 Then the dancers showed up. Dancers! The Paris Opera is home to the Paris Ballet… so this association was not a stretch. But as an ex dancer and figure skater… my little heart was all a’flutter at the unexpected collision of worlds: film and dance.

This lovely duo was apparently the focus of the day’s mystery project. 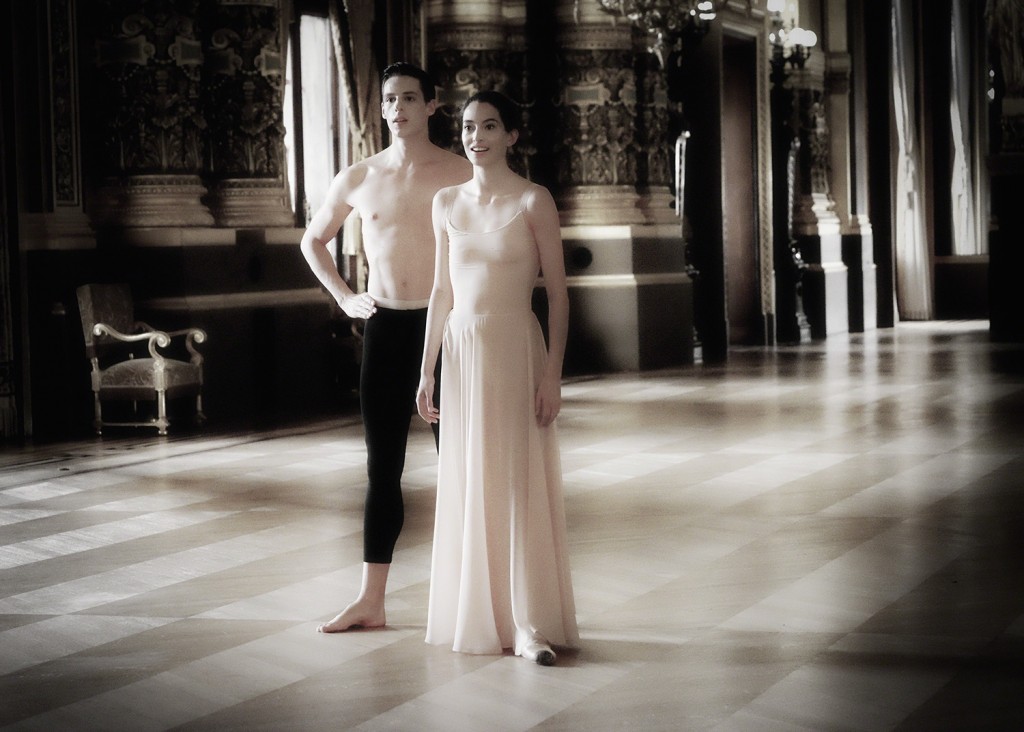 They warmed up, chatted with each other, worked through a few moves while the crew finished covering the windows with orange gel, adjusted lights, and all that behind-the-scenes magic they do… 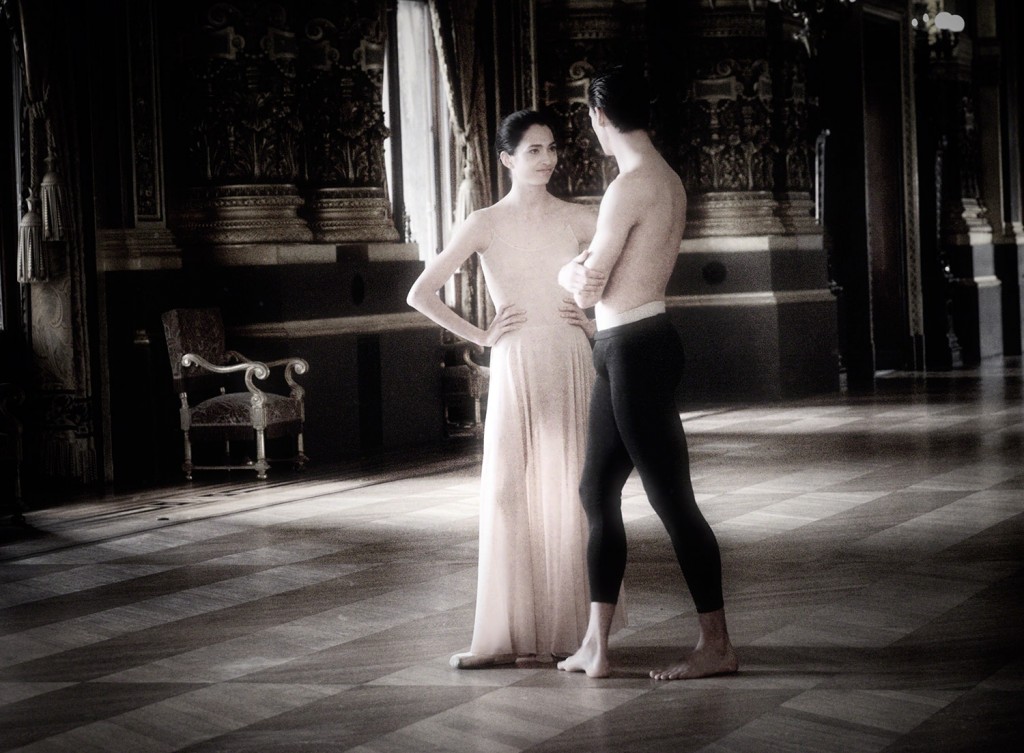 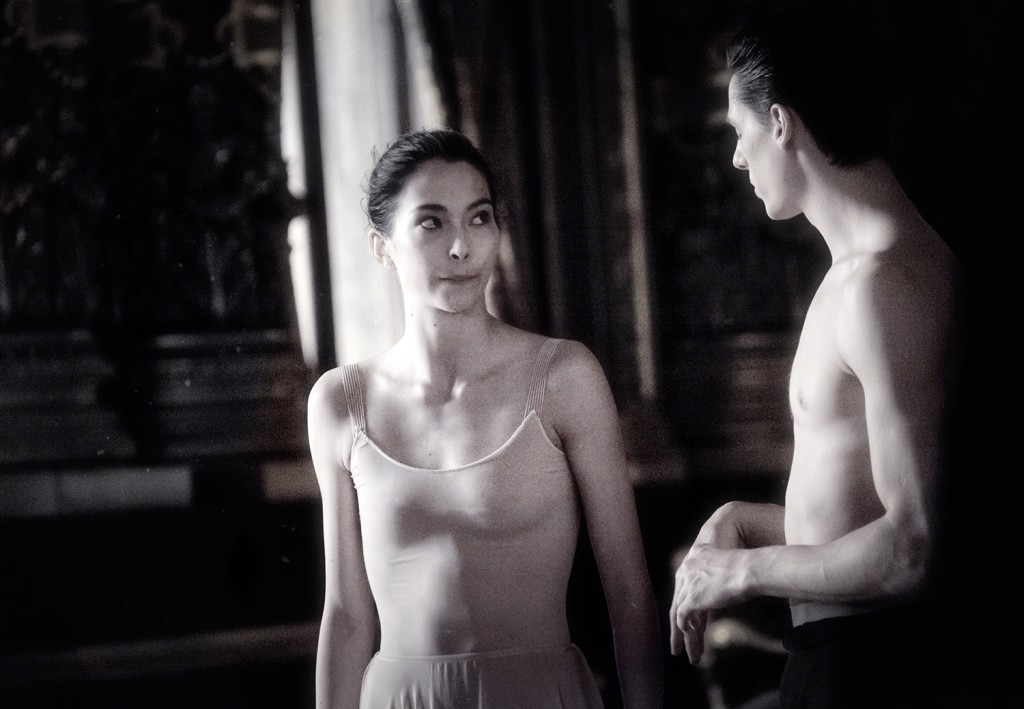 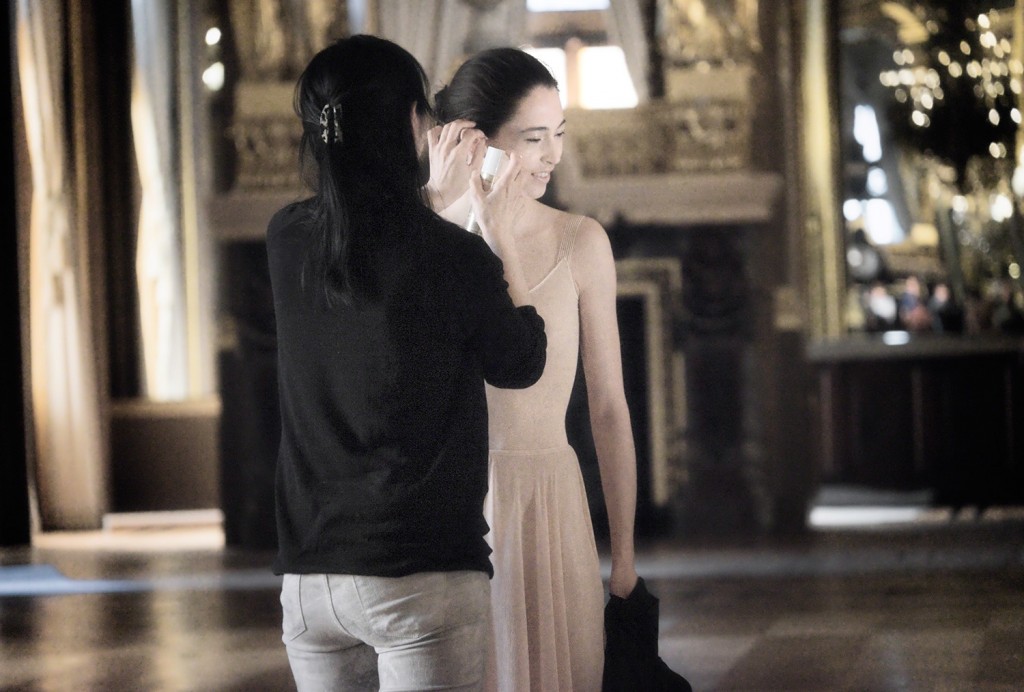 Before long, our lord and lady of the dance started working through a few combinations. Filming still hadn’t begun, so we were allowed to stand there clicking. Truly amazing!

OK Gear: With Me Or Against Me?

I don’t usually think about my gear in moments like this… but I’ll admit, I wondered how the Fuji’s would manage at 6400 ISO in low lighting conditions (clearly, lighting design on this project called for a verrrrry soft, subtle and subdued effect)… and how well the XF55-200mm, F3.5-4.8 R LM OIS would stop action. Not to mention the timing… would they be fast enough to NOT let me miss the moment? 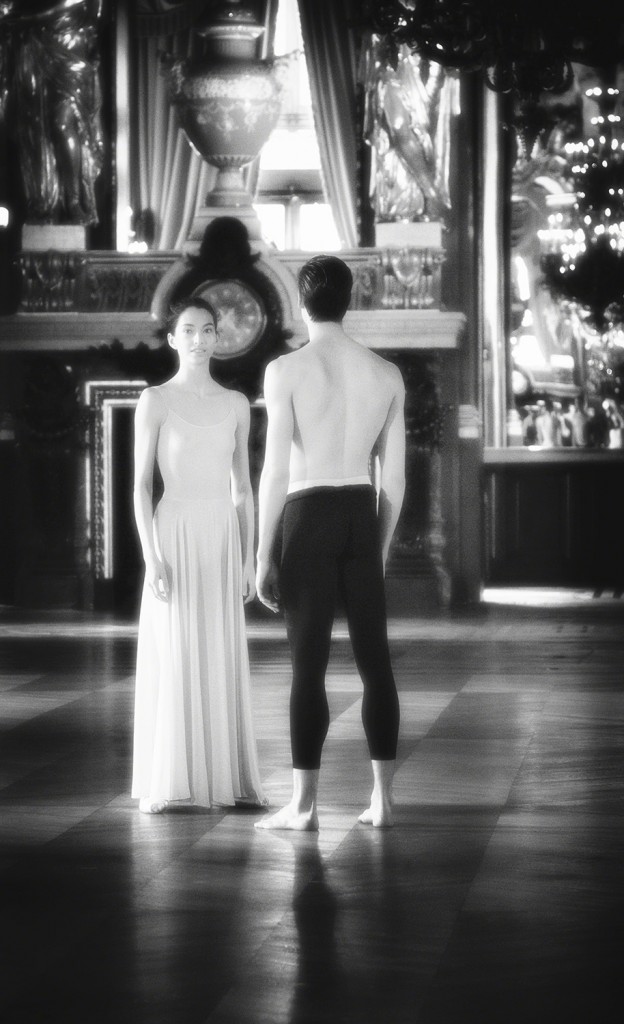 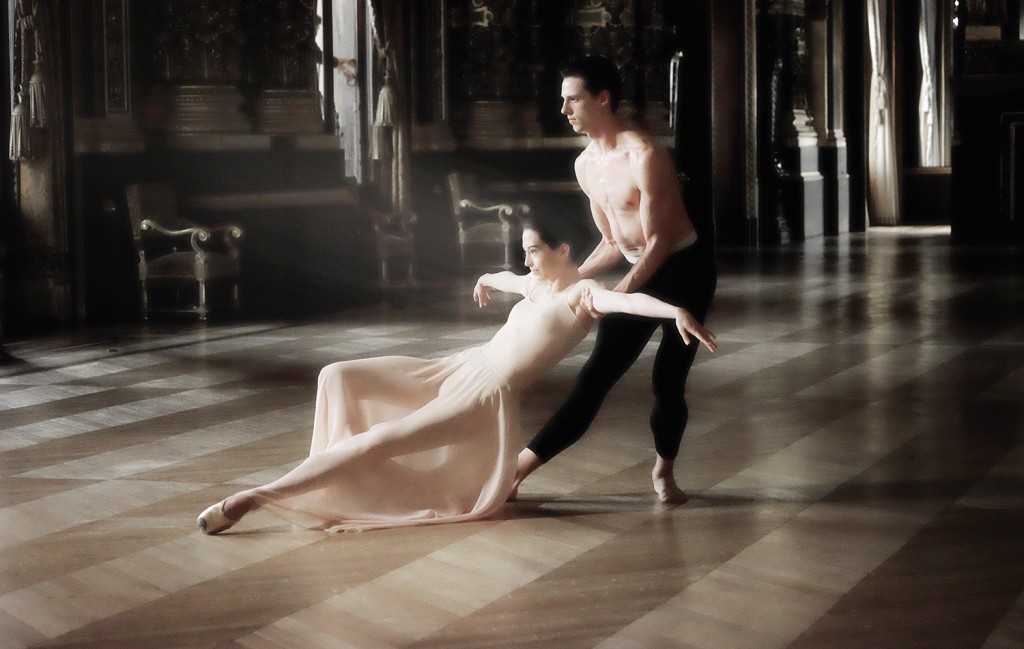 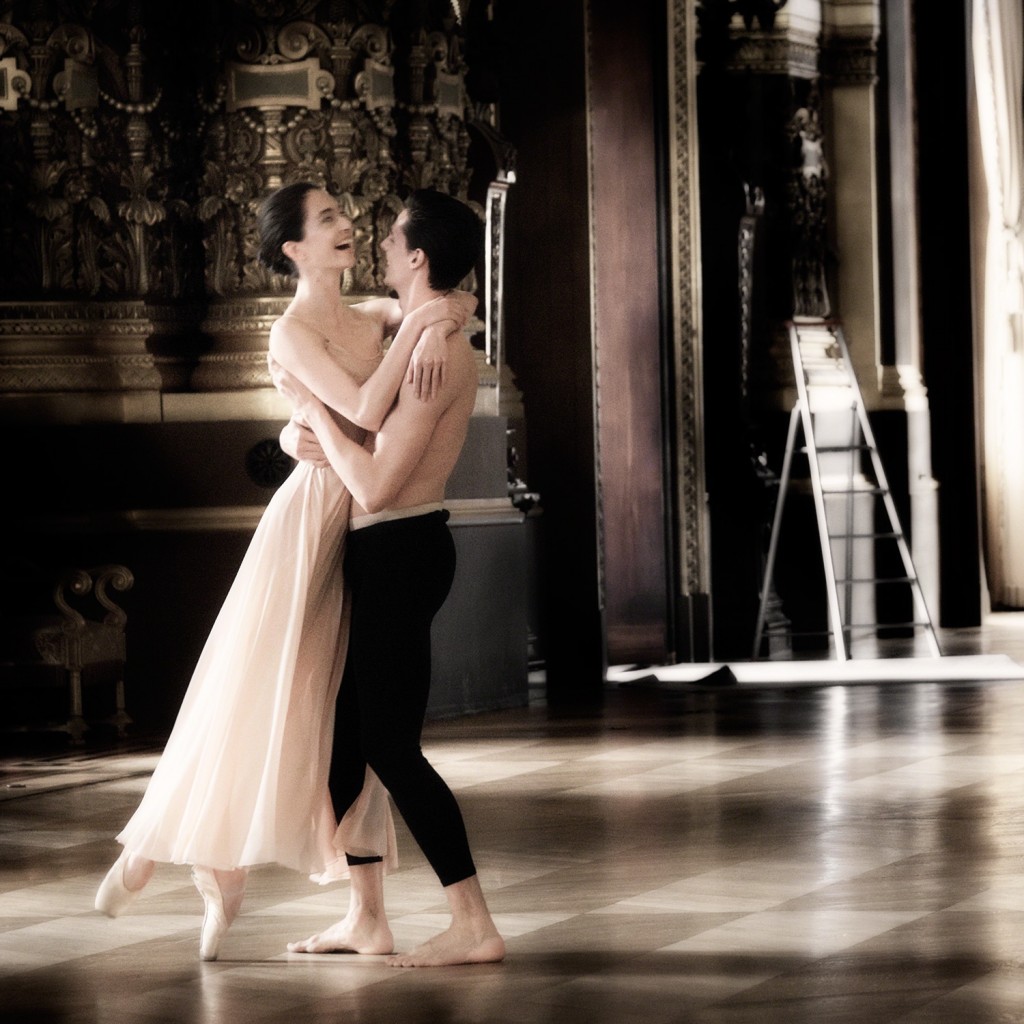 The answer:  They do just fine, thank you! Even with a relatively slow lens for these conditions. And whatever grain finally does appear at high ISO is cool with me.. I’m an analog girl at heart, so I don’t mind it a bit.

One of the reasons WHY I don’t mind it is it doesn’t look like digital ‘noise’. Typical digital noise has regularly shaped and spaced specks/dots. It screams “I’m 21th century and have absolutely no character, no mind of my own nor opinion whatsoever. I repeat myself over and over and over and…!!!”. Ugh. The specks that made up grain in old analog-style images was irregular, both in size and spacing. They said, in sultry tones: “I’m an original. Loads of character. On-purpose. Art.”

In my expanding Fuji experience, the higher ISO performance has been a pleasant surprise. (I’m even beginning to wonder if it might rival my Canon 6D in that department. I haven’t tested it under all the same conditions yet, but wow – so far, so amazing!). BUT when any kind of noise does appear, it’s more like good old fashioned grain. Heck, I ADD grain to my images sometimes, so this is just fine with me.

The main thing I want to say for today about the gear is that I don’t want to sit around and talk about it; I want mine to do its job and get out of my way. I want it to let me paint my pictures. Be spontaneous. Give me new ideas, take me places. Help me bring the rapture I feel in this moment home to live in my artist’s heart for all time. Enable me to create something I’m thrilled to share with the world. Expand my world and the way I see it.

What I experienced at the Palais Garnier was one of those miraculous moments in life. I came here to Paris, to the birthplace of le muse to stir my soul, to follow my whims. To seek an even deeper connection to life-as-art. The rewards of such a quest, when they do come, is magic: pure, glorious magicianal moments that take  your breath away.

I want gear that gets that and conspires with me on the quest… by offering the world, then stepping out of the way to let me create my way. That’s what great gear is to me. Great technically… executed artistically.