Here’s How It All Went Down

I was sitting there, working. Behind the computer. For too long. Feeling totally depleted and not at all productive. Yet, there I sat, the early warning bells screaming that I needed to move, eat, drink some water, change gears!  I wasn’t listening. Until…

My muse stepped in and smacked me upside the head. WHACK!
“OUCH!” I cried.
“What are you DOING??”she hollered. “You’ve sat here long enough, you’ve done enough. GET OFF YOUR ASS!
“I know, I know,” I interjected. “I’ll go. I just gotta…”

The Excuse Vs. The Real Work

See, “I just gotta” and “… let me just…” are my famous words du procrastination. They refer to stuff I think I just “gotta” do, which I don’t really gotta do, which always ends up with me NOT doing what I really oughta and most passionately wanna do. Confused yet? Yeah. Welcome to my mind.

I know this for sure: Dreams don’t come true without action. So out the door I went, lead by a burning desire for something really extraordinary to happen. I held this burning desire in place of positive expectation.

“WHAT DOES THAT EVEN MEEEEAN?” I hear you shriek. (Have you been talking to my muse??).

OK, y’know how when you go to a movie that you absolutely, positively KNOW is gonna be great? You’re stoked to see it… and you’re all excited as you get your popcorn and stuff, because you know you’re about to have your socks knocked off? That’s positive expectation.

Then… when the movie’s All That and even BETTER than you knew it would be? That’s positive expectation, exponentially fulfilled.

Was it the movie – or your expectation that made the whole experience so awesome? Who knows…  but one thing’s for sure: NONE of it would’ve happened if you hadn’t GOTTEN OFF YOUR ASS and gone to the movie!

See how that works? Write that down: Get Off Your Ass.

Back At The Bonsai…

Meanwhile, back in my movie… the afternoon turned out well. Not 5 star awesome, but definitely good. I made a point of seeing new things in the oft-photographed mecca that is Bonsai Rock in Lake Tahoe, Nevada side.

I was pleased. I’d gotten off my ass and my positive expectations were fulfilled. Yay for me!

Then it happened. That ‘thing’ that would kick the whole evening into that fist-pumping, big cheesy grin, hollering out loud “YEAH!!” experience. (i.e.: positive expectation, exponentially fulfilled.)

Suddenly and quite unexpectedly, 2 super-energized young men bounded onto the beach.

One: a guitarist named Adrian Bellue.
The other: photographer Jason Sinn.

Their goal: shoot a concept photo for the cover of Adrian’s new album.
They had driven over 2 hours, got stuck in 3 traffic jams, nearly forgot the money outfit Adrian wore for the shoot and almost missed the light. But there they were, out of breath, moving as fast as they could, determined.

Adrian is blind in one eye – but Jason grabbed his glasses anyway. Hey, who needs to see as you rock-hop in barefeet in dwindling light if it means getting the MONEY shot??

Jason grabbed his gear and splashed into the water (discovering just how slippery the rocks underfoot really are!).

Adrian improvised on his guitar to get in the mood and… WHOA NELLIE!

The notes spun, ricocheted and bounced off granite and each other, amplifying it in wondrous ways. People started showing up out of the blue, drawn by this wondrous sound.

I made a few quick videos and SUPER quick-edited them together to give you an idea… (of course, I asked permission first to video and photograph!)

I instantly went from landscape photographer to BTS (behind-the-scenes) documenter in a heartbeat and LOOOOOVED it! It reminded me of that magical day in Paris at the Palais Garnier… another time I got off my ass, asked for Extraordinary and let it happen.. 😀 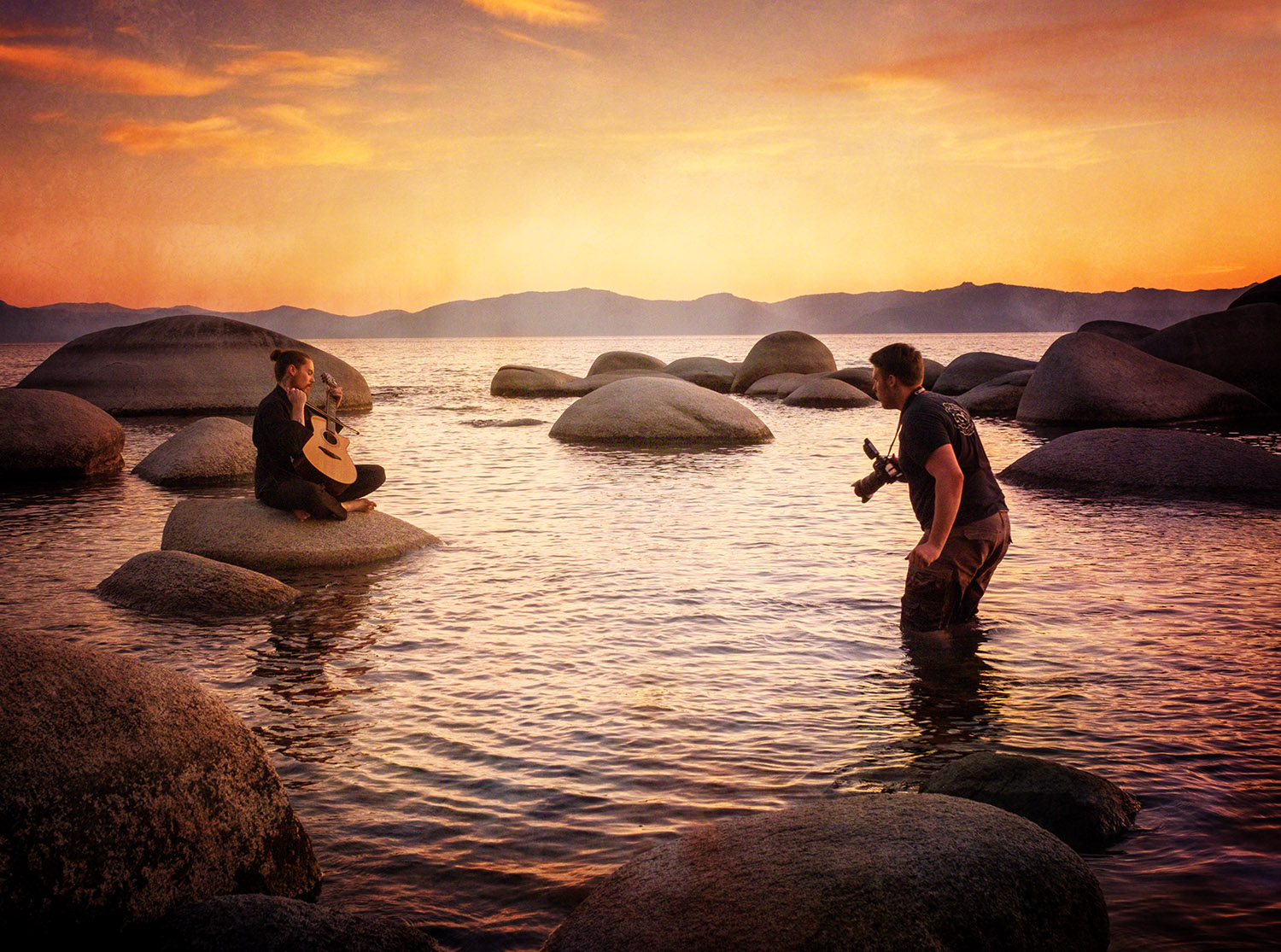 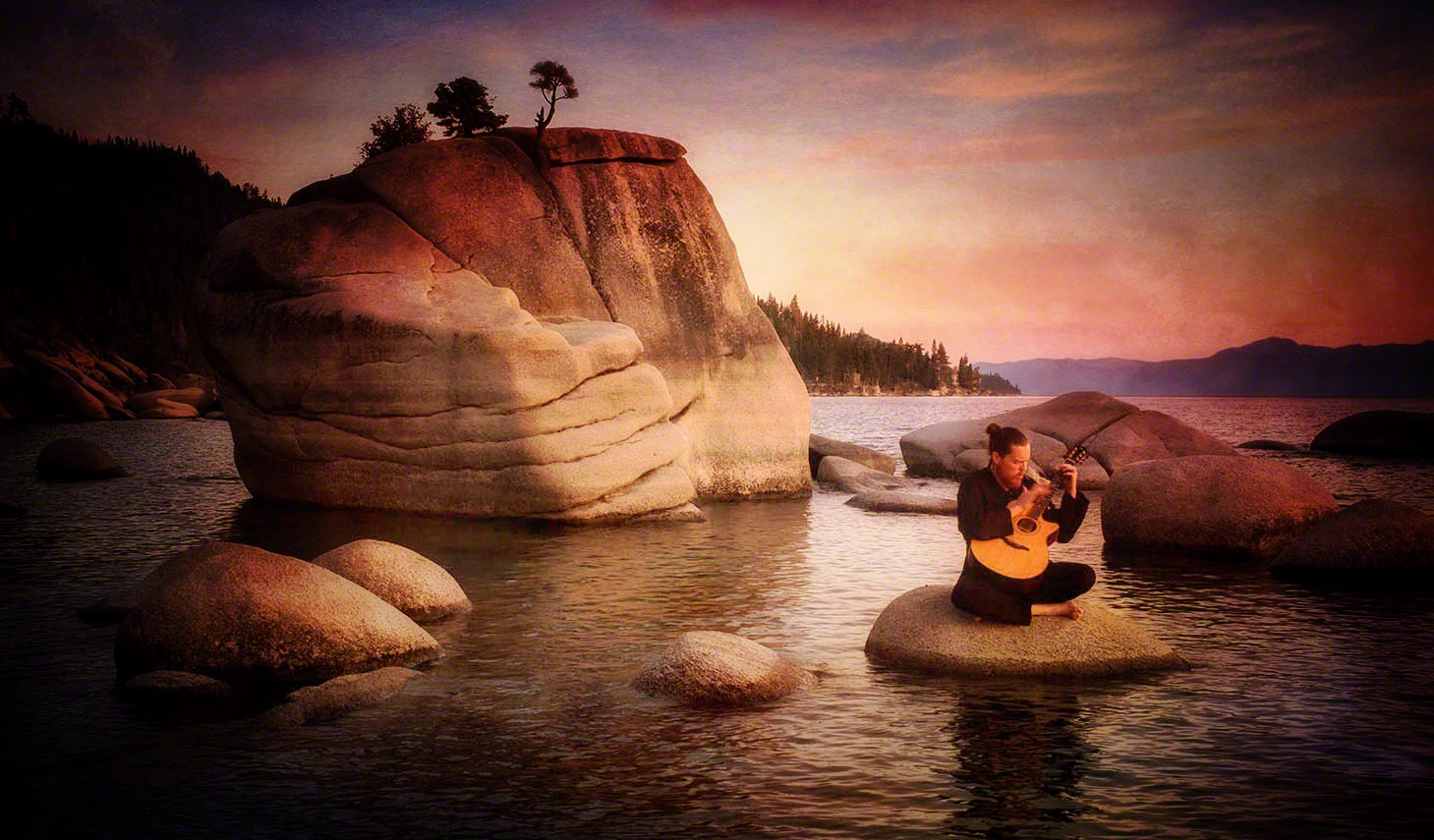 Jason balanced on rocks slippery as fish, whilst holding a camera, his flash rig… and got his shots without even falling in! 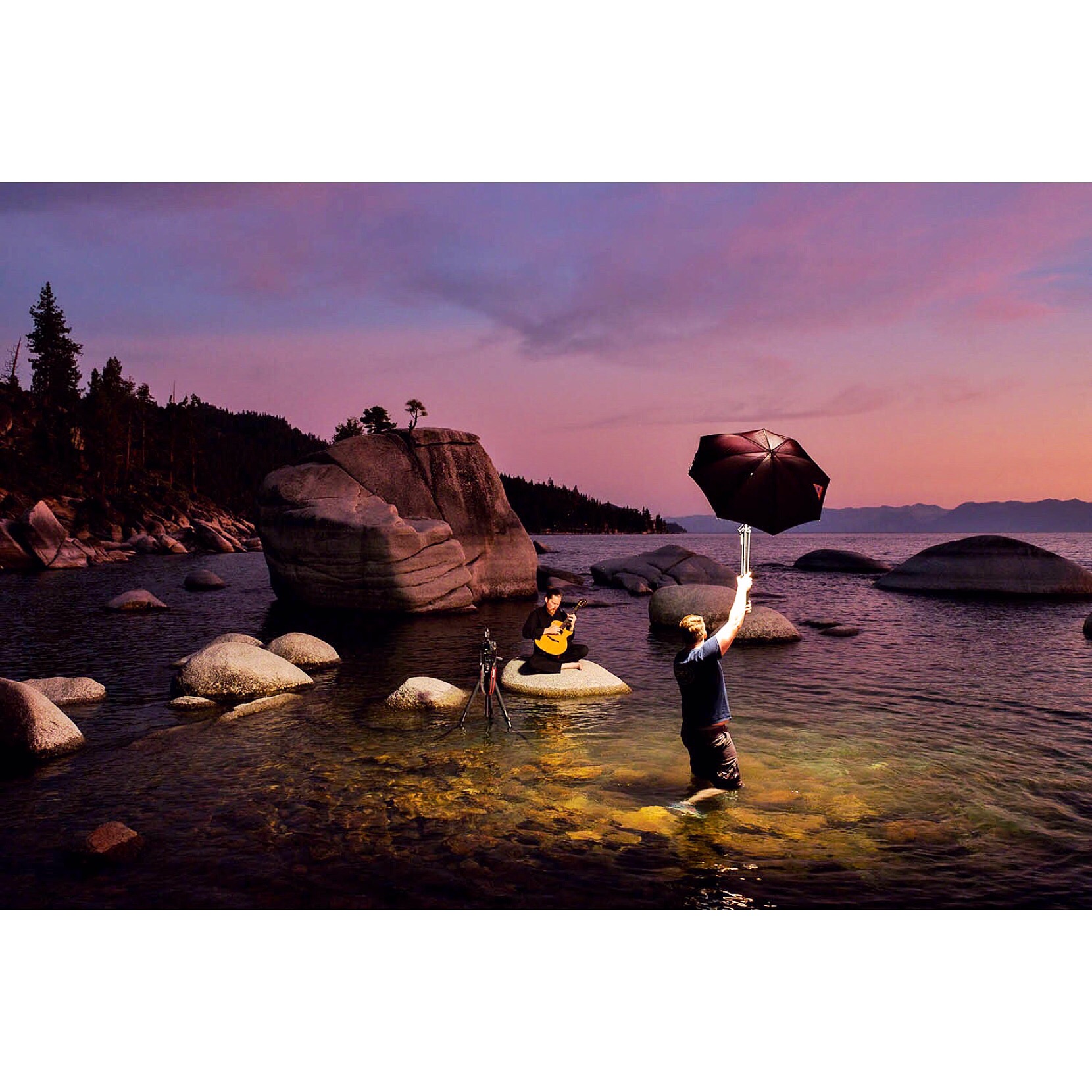 I gave all the images and movies to them both as a thank you. Because we became friends that night. Because after all they’d been through to get there that day, they deserved some evidence that something truly extraordinary truly did indeed happen. 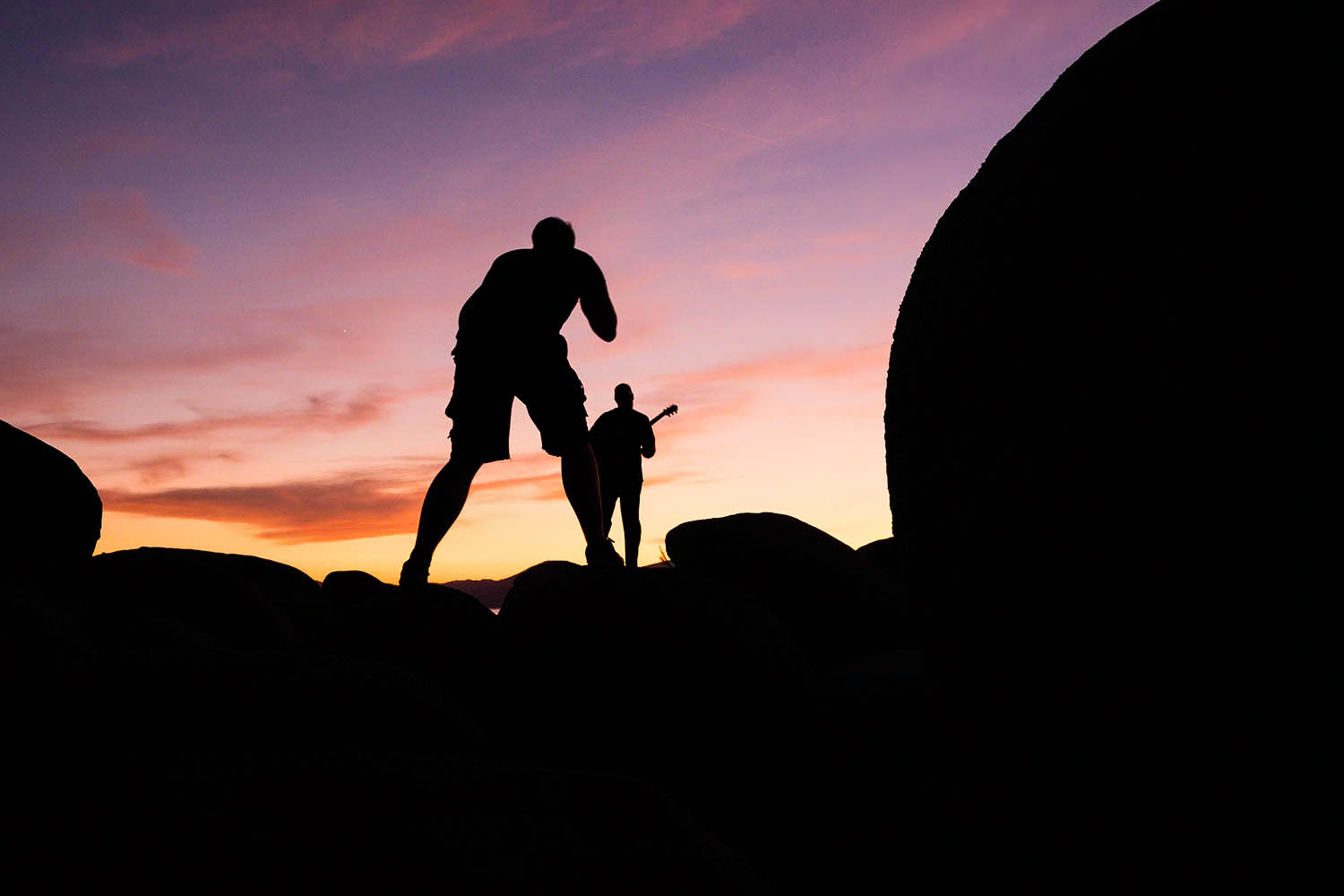 1. Dream. Big, small, doesn’t matter… just never stop dreaming.
2. Always, always listen to my Muse. Especially when she yells at me.
3. Get off my ass. Often.
4. Expect greatness. Positively. Exponentially.