One February day, I join Trey Ratcliff for a large photowalk. (NOTE: he did it again this year, it was just as awesome in the way it connected like minds and hearts. Check it out here.)

Still… I brought my tripod, I think to myself. I’m gonna use it, dammit!

So I do my best. Set up my sticks at that cool dusky time, when there’s still enough ambient light to see everything… where you don’t have to do TOO long of an exposure, nor use too high an ISO. Just a long enough exposure to smooth the water, but not so much that the lapping tide drags one leg of your tripod slowwwwllyyy into the sand, creating a blurry schmear of the whole scene. heh.

I pull one off with no people in it. I’m amazed. I post it on social, but not on my website. I think “It’s too usual. Too much like every other image of Santa Monica out there”.

Note to self: Purchase a jumbo can of “Doubt-B-Gone”, ASAP! Apply liberally. 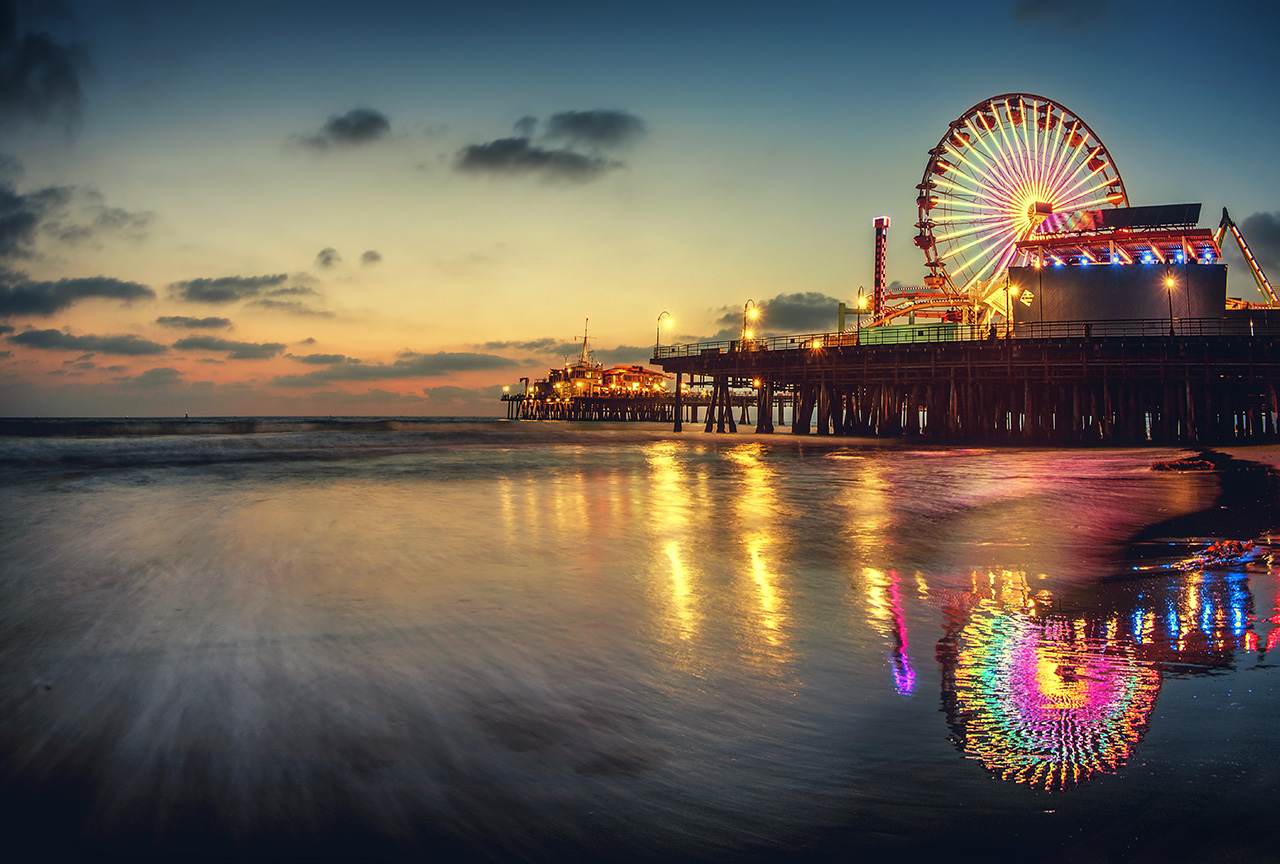 A few months ago, I got a call from Coastal Living magazine, who by some miracle found my Santa Monica Pier out there on the interwebs and asked to license it for their upcoming summer issue. I agree… the deal is made. Said summer issue came out this past July – and voila! My image is a 2 page centerfold! Ahhh, that’s why I was paid so well. For some reason, I thought it was going to be MUCH smaller. Grin. 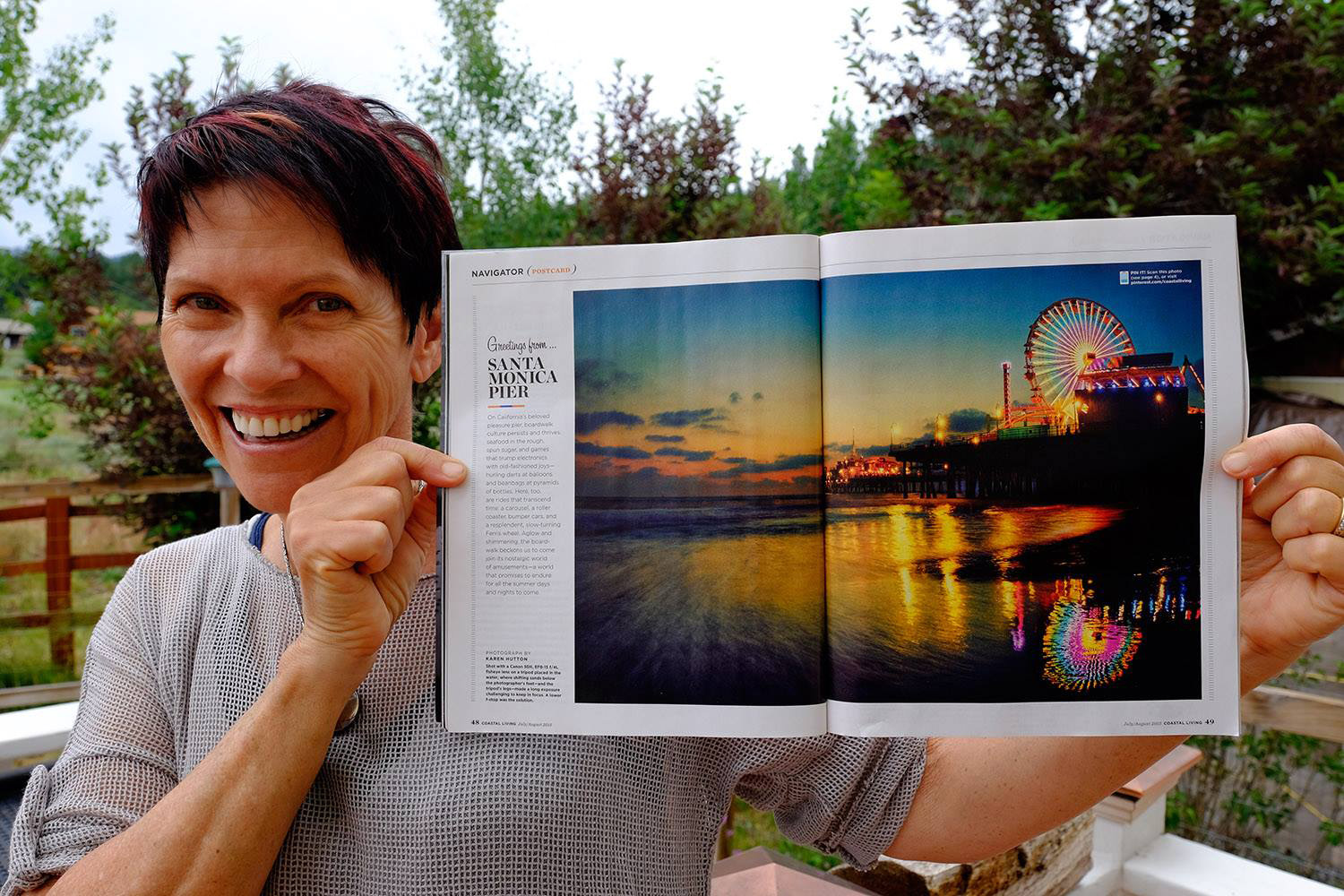 I’ll be honest. Not living on the Coast nor in Southern California, I had no idea this magazine was so popular. Turns out it’s kind of a rock star in magazine world! Not long after, I got a call from a lovely woman named Marcy, interested in purchasing a large print.

Her beloved grew up near Santa Monica, it seems… and has wonderful memories of time spent there. Marcy wants to bring those memories home in a 60″x40″ gorgeous print. (I gulped. Nowadays I shoot panoramas for large prints. But I didn’t back then! This was a single-frame image from my Canon 5DII.) She asks: “What do you suggest we print on?”

After talking with her about her home, the vibe she wanted to achieve, budget and all the rest… I called up my custom fine art printer-framer Davinci Digitale in Laguna Hills. They are second to NONE when it comes to both custom printing and custom framing, via their sister business Concept Framing.

They print/frame for some VERY high end and well-known photographers and artists and I just adore the whole gang… John Curcio (the visionary owner) and Kathy & Greg Ogden (the magic behind the scenes), made me feel like I’d found HOME.

Davinci is part of my team now. I’m part of their family. I knew if anyone could help me create this very large masterpiece, it would be them. So I sent Marcy over to meet everyone and see some materials, learn some things about printing – and get some world class help choosing the very best materials for HER needs. It was the BEST decision I could make!

No surprise, she was absolutely blown away by all (in the best possible way) by everything she learned.  We all ended up settling upon gorgeous white aluminum material as the absolute best choice for this particular print and its new home. It has just a bit of texture, provides clarity and pop without shine… and it gives an image a bit of a painterly feel. Perfect!

Finally, it was time. I went down there last week for a couple of reasons… one of them was to meet Marcy and sign her print, at her request. This is the part I love the most… meeting the person who’s purchasing a large print and sharing the Big Reveal. It doesn’t always happen this way… but when it does, it just thrills me to my toes!

I was there early… so got a chance to watch the final printing happen. It was 105 degrees F in the warehouse studio with about 90% humidity that day… but it didn’t dampen my spirits (just my entire body!) and I was SO excited to see this all come together! 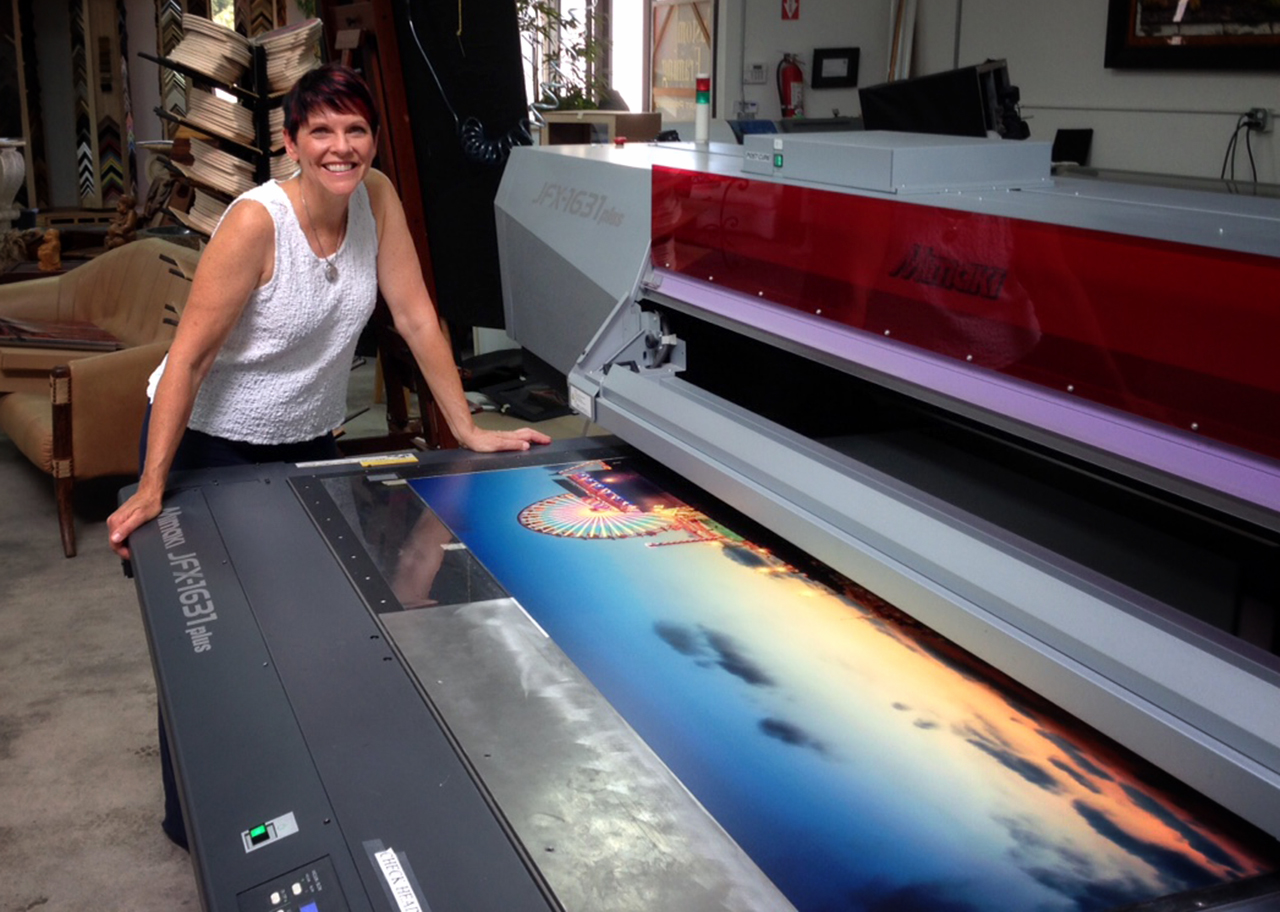 Marcy arrived around 3pm. It was so awesome to meet her and put the voice on the phone together with the lovely face that greeted me!

Then… the Big Reveal. The moment she saw the finished product, she burst into tears. I gotta admit, I got a pretty choked up myself!
(Thank you, Kathy Ogden for the taking these photos!) 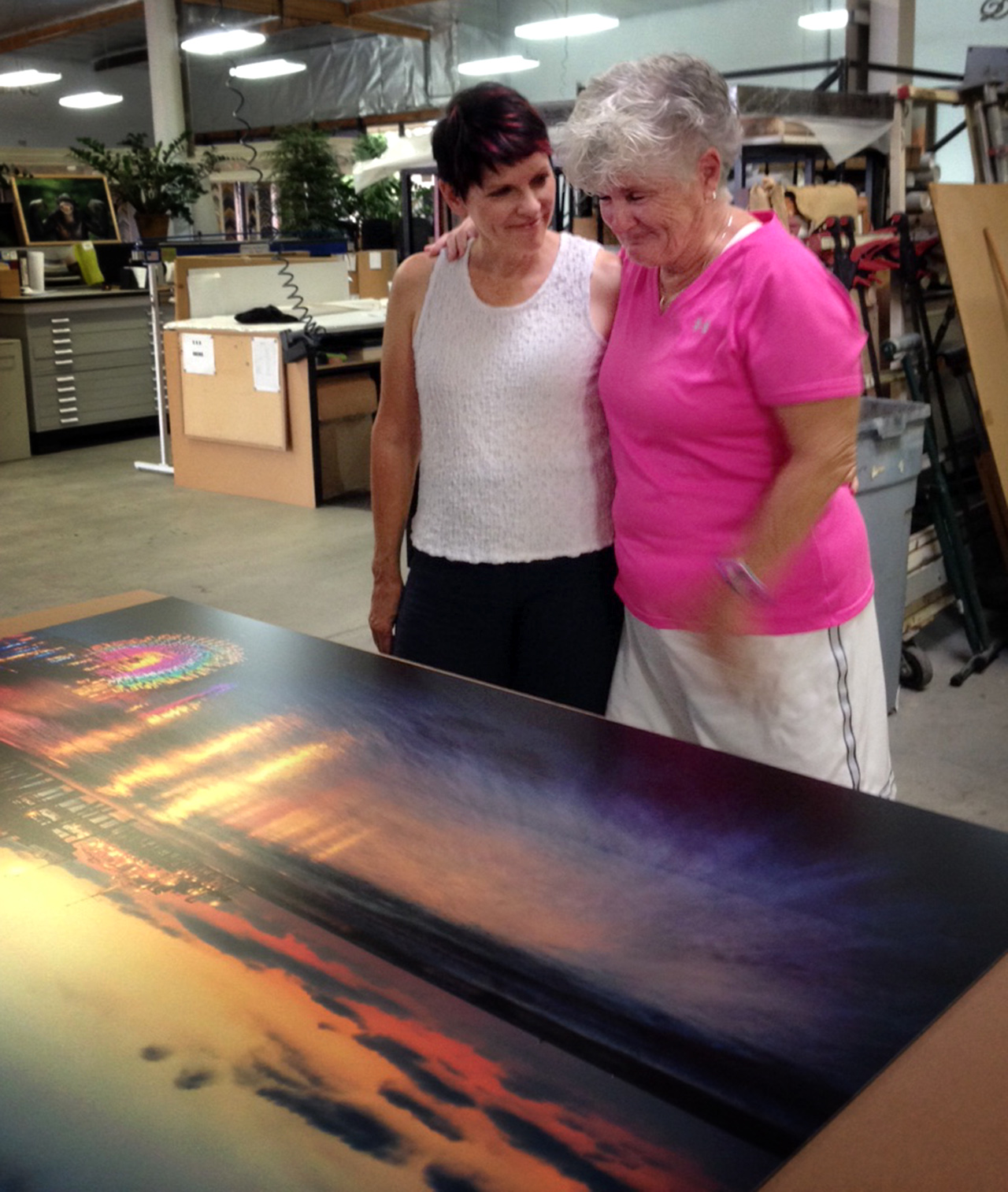 “Story” is huge to Marcy (we had a total bonding over that!)… so she told me more about why this photo has so much meaning to her, how it was going to make them both feel… and the honored place it would have in her home. I live for these moments… my heart was full to overflowing!

Finally, it was time to sign. With a gold paint-pen, no less… and on the FRONT! For some reason, I thought I’d be signing discreetly on the back, but nooooo… my Joanna Hancock was to be right there in plain sight. I was actually nervous! I practiced a few times on a piece of paper before laying that indelible, permanent, no do-overs, no “delete” button pen onto the hallowed print surface. GULP!

Luckily, in this case practice DID make perfect – and even I was happy with the result. Whew. Like I wasn’t already sweaty enough in that heat! hahaha. 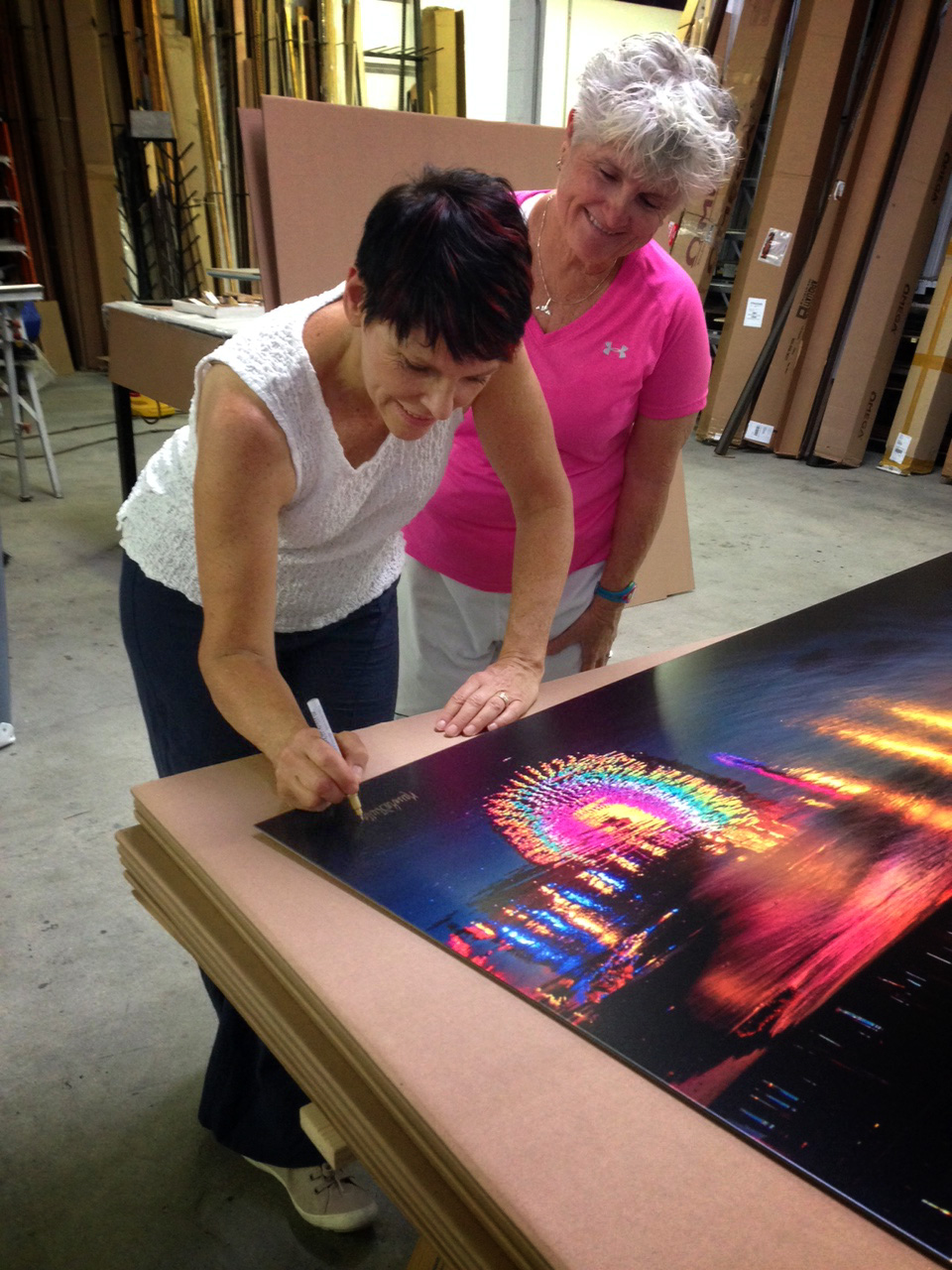 Looking into Marcy’s delighted face, her teary eyes and feeling the incredible, heartful emotions that ran that day… I thought; “THIS is why I do what I do.”

And when she told me about the light and joy this print would bring to her home for years to come… I was honored. Touched. Singing on the inside. It just renewed my joy in this art form I love so much. Anytime I EVER feel a bit down… all I’ll have to do is look at these photos and nothing else will seem important. It fulfilled the vision I had as a child, whose deeper meaning has only recently begun to hit home.

Connection. The outpouring of Love… Light… Inspiration.
Yep, it’s what makes getting up in the morning worthwhile.