A day with photographer Omar Z Robles, dancer Alexandra Jacob and Dance itself is like manna from heaven.

On my recent trip to New York City (I wrote some about that here), I wanted to meet up with Omar Robles, fellow Fujifilm X-Photographer, multi-talented artist and most recently – known for his phenomenal photographic works of dancers in urban areas. A man after my own heart!  We met in October briefly at a Fujifilm event – and pledged then to hang out on one of my trips east. This was our chance!

“Professional figure skater” was the title of one of my earlier lives. It was a 100% awesome chapter – and it helped shaped who I am, my art and perspective in so many ways. I began dancing for reasons that most skaters do; to enhance my flexibility, line and artistry on-ice. Having been raised on amazing music through my mother’s love of it, skating and dance turned into the most amazing means to embody and express it. All 3 together gave my soul wings.

I fell in love with dance from my very first class. Ballet was hardest for me, since figure skating draws on very different strengths; often opposed to the ideals of classical dance. Especially in the feet department! But I loved learning it – as I did modern and jazz. I always looked forward to class and couldn’t wait to discover ways of bringing whatever I learned out onto the ice. It was like a daily artistic practice, full of music, movement and transcendence. It also got me started in acting, since character creation became practically an obsession along the way!

I don’t have alot of great photos from those days, sadly. Some of you may have seen this one, where I played a sad-faced clown. It was from the very last ice show I ever performed in, back in the ’80’s – at my home rink, the Redwood Empire Ice Arena (REIA) in Santa Rosa, owned by Charles M Schulz.

Yep, I knew both Snoopy and Sparky (as those of us who knew him, called Mr. Schulz)… and performed on ice, both live and on TV. (CBS’s “She’s a Good Skate, Charlie Brown” featured the skating of three of us from REIA.). 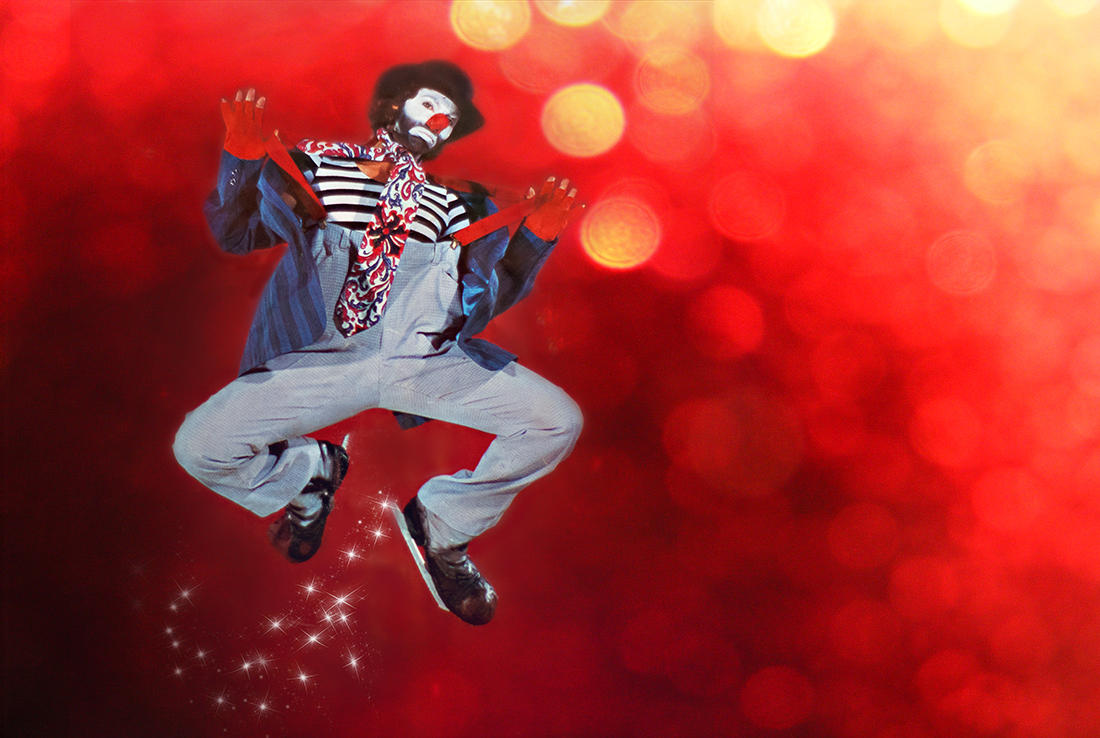 Cut to now.
As part of my December creative journey in NYC, I wanted to hang out with Omar… and figured what better way to do it than tag along on one of his photo shoots… IF he would have me! I value and honor an artist’s creative process tremendously – and didn’t want to encroach in any way. But I asked – figuring all he could do was say no.

I wanted to watch him and his dancers work, to be around a new flow of creativity. And I wanted… well, I just wanted to hang out with artists for awhile. My heart and muse requested it.

I met them at the Oculus: New York’s $3.9 billion transportation hub at the World Trade Center, which will now connect New Jersey’s PATH trains and NYC’s subways. A little trivia for ya! I got there early and snagged a nice touristy overview photo of the joint. It’s an impressive place!

Rules and the Boot

I caught up with Omar and Alex on the main floor and asked straightaway what the ground rules were. They were simple and logical: don’t take my own pictures of dancers, to avoid the chance of having matching images.  I was good with that; after all, this is HIS business and his photo shoot. I’ve had people poach my landscape photos before – literally plant their tripod next to mine, look at my camera and arrange the same shot. It’s lame. I don’t appreciate it, nor should Omar.

First thing that happened: security gave us the boot from indoors. Apparently you have to have a permit to photograph in a professional manner; which you can get from the Port Authority or from the Westfield Center offices. Without one: you get the boot. 9/11 changed so many things…

So we went outside, which was still mighty picturesque! I had fun starting there to make a story out of our day.

Here’s Omar, visualizing a shot. As a former mime who studied at L’École Internationale de Mimodrame de Paris Marcel Marceau, a former dancer and actor himself… he knows how to direct dancers from a wealth of deep personal experience. He knows the language, the movements, the expression of dance. He’s a fantastic visual director:  proficient, professional, calm and full of imagination. I so respect all of it.

From The Oculus to the Subway 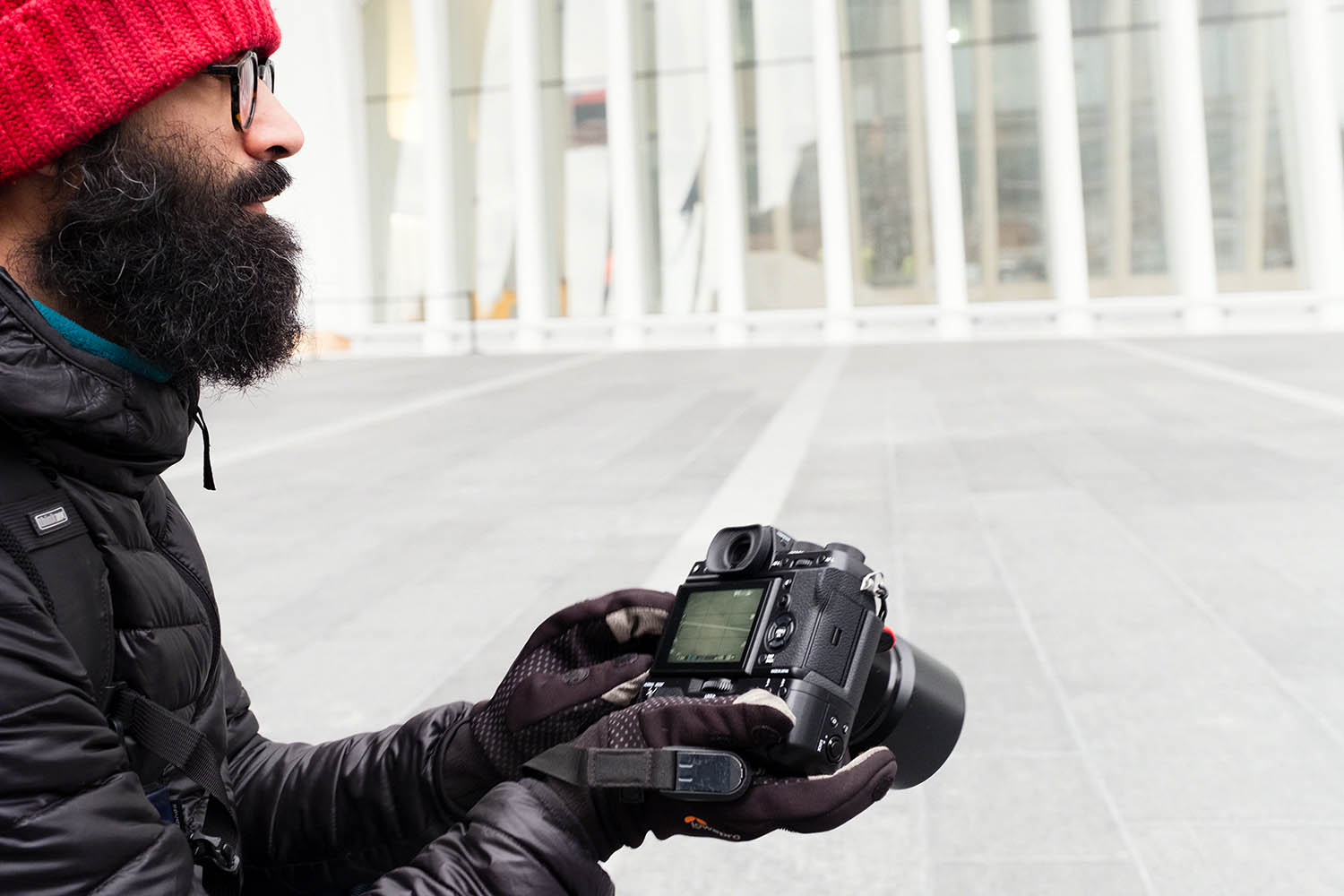 Here’s a candid image of Alexandra. She was with the Dance Theatre of Harlem for 10 years, but is now freelancing up a storm. She still takes daily classes, but now counts modeling, collaborating on projects and soon… producing and directing to a fantastic list of talents. She’s one of Omar’s faves to work with… and I could sure see why!

The other cool thing? She’s a California girl too. 😀 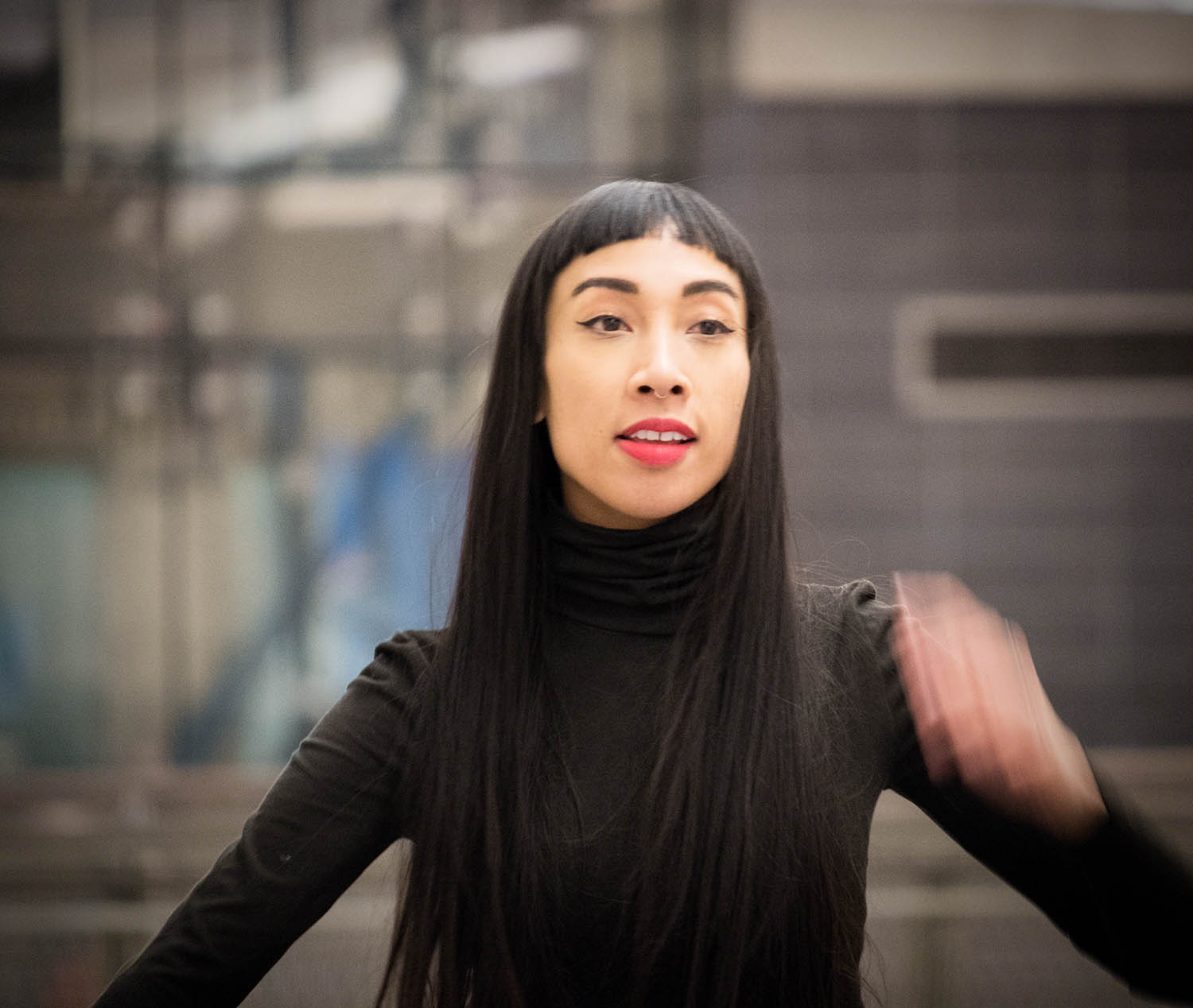 Alex also has incredible fashion sense and comes with a fab variety of looks for different shots. She shops primarily at thrift stores… and somehow manages to find THE MOST INCREDIBLE pieces to work with. Ones that give her an edge, express who she is to perfection. It’s all part of her unique voice in movement. 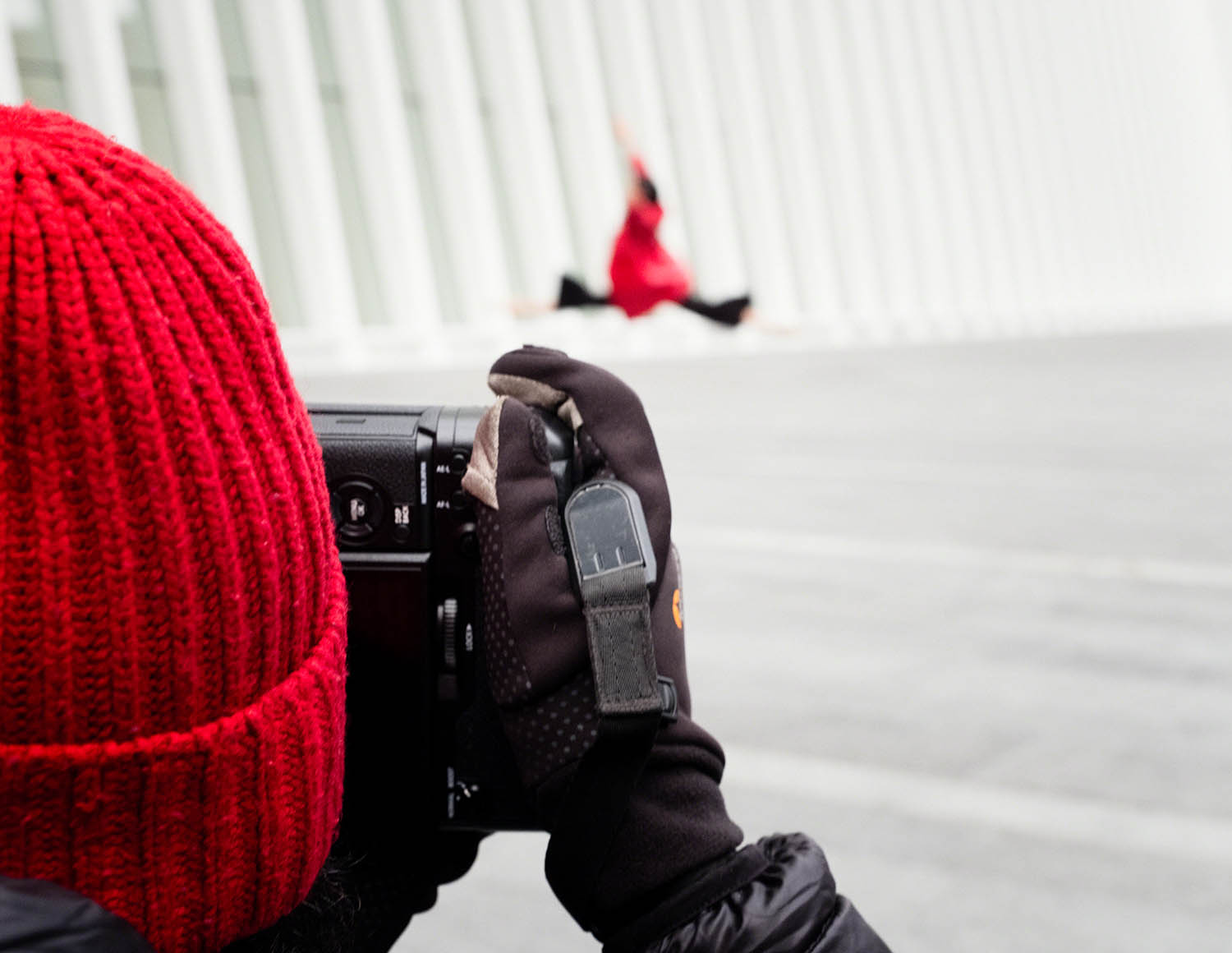 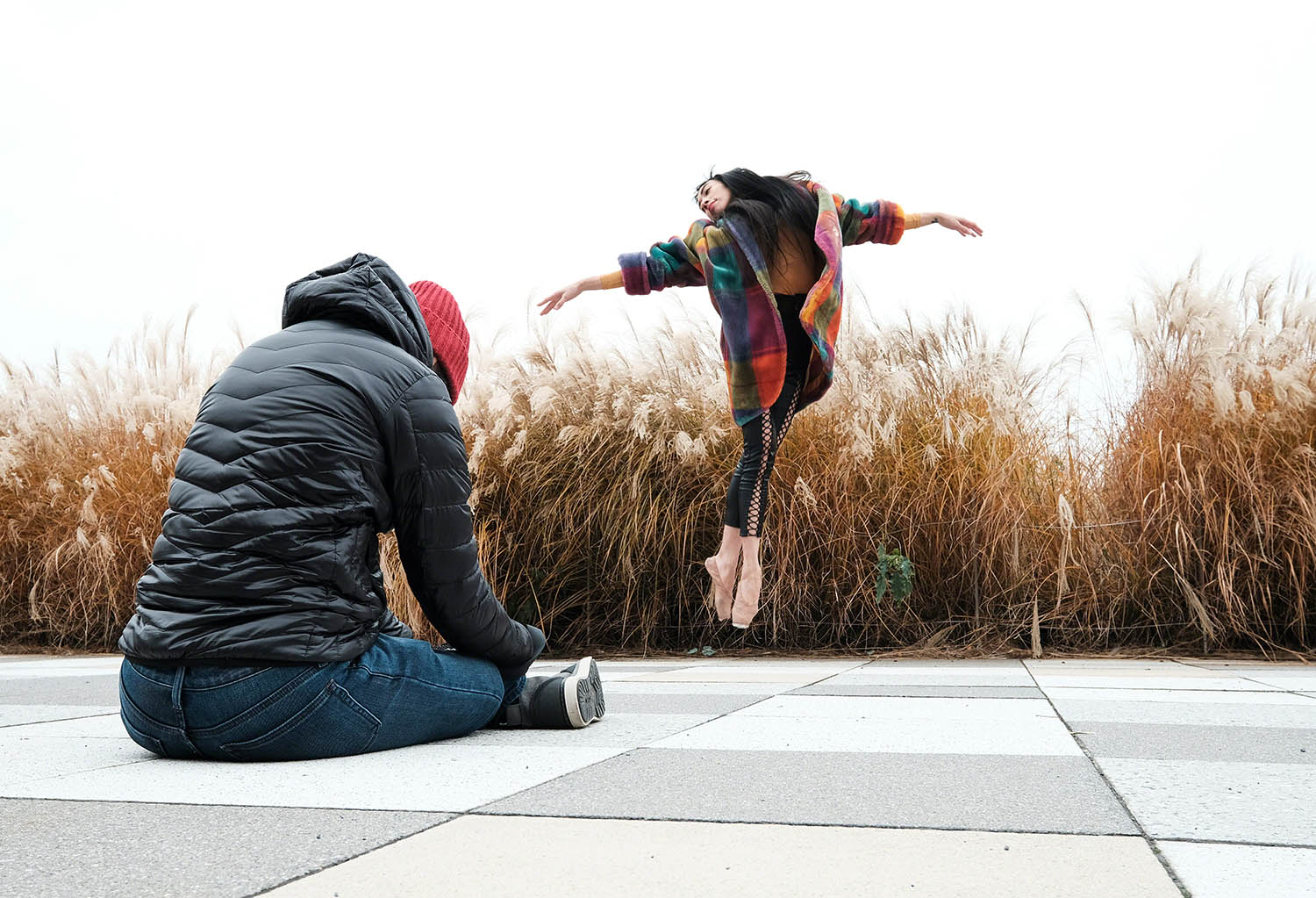 Here’s a question: How does she carry all that wardrobe? I mean, there ain’t no NYC sherpas for this sort of thing. Nope, Alexandra hauls it everywhere in her trusty rollerbag. And does wardrobe changes inside of that big coat she’s wearing! “Mobile” took all new meaning that day. 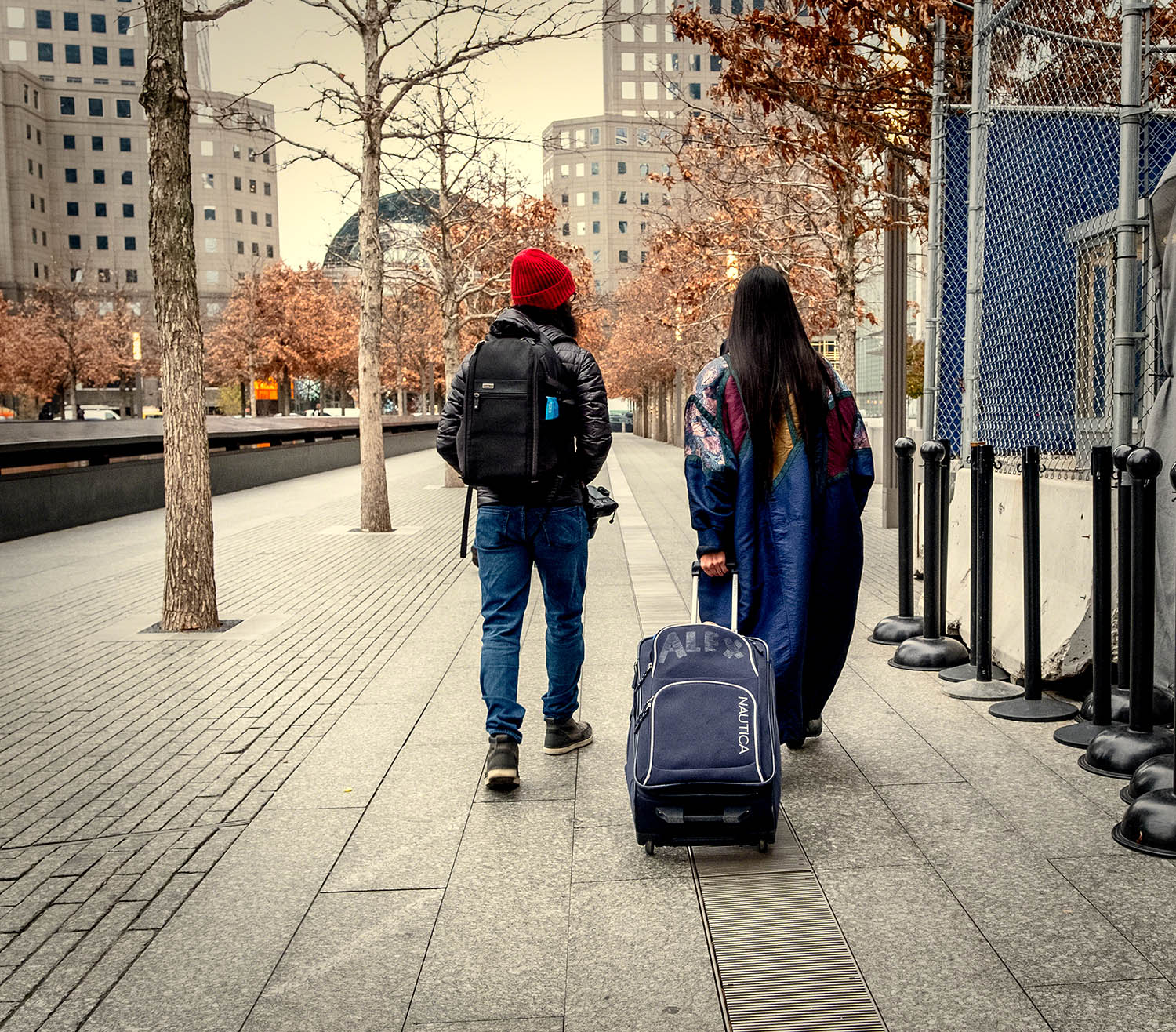 Along the way, she and I chatted about dance, artistic endeavors, backgrounds… and feet! That’s one thing we both had alot say about, since our little feetsies truly do suffer for their art. After all the years of skating and dance, finding shoes now I can wear comfortably as I walk for miles – in all seasons – is like a Hero’s journey. In her case, she’s had dislocated bunions… twice!! I visibly flinched when she told me that.

I took this photo as an Ode to Feet. Heh. 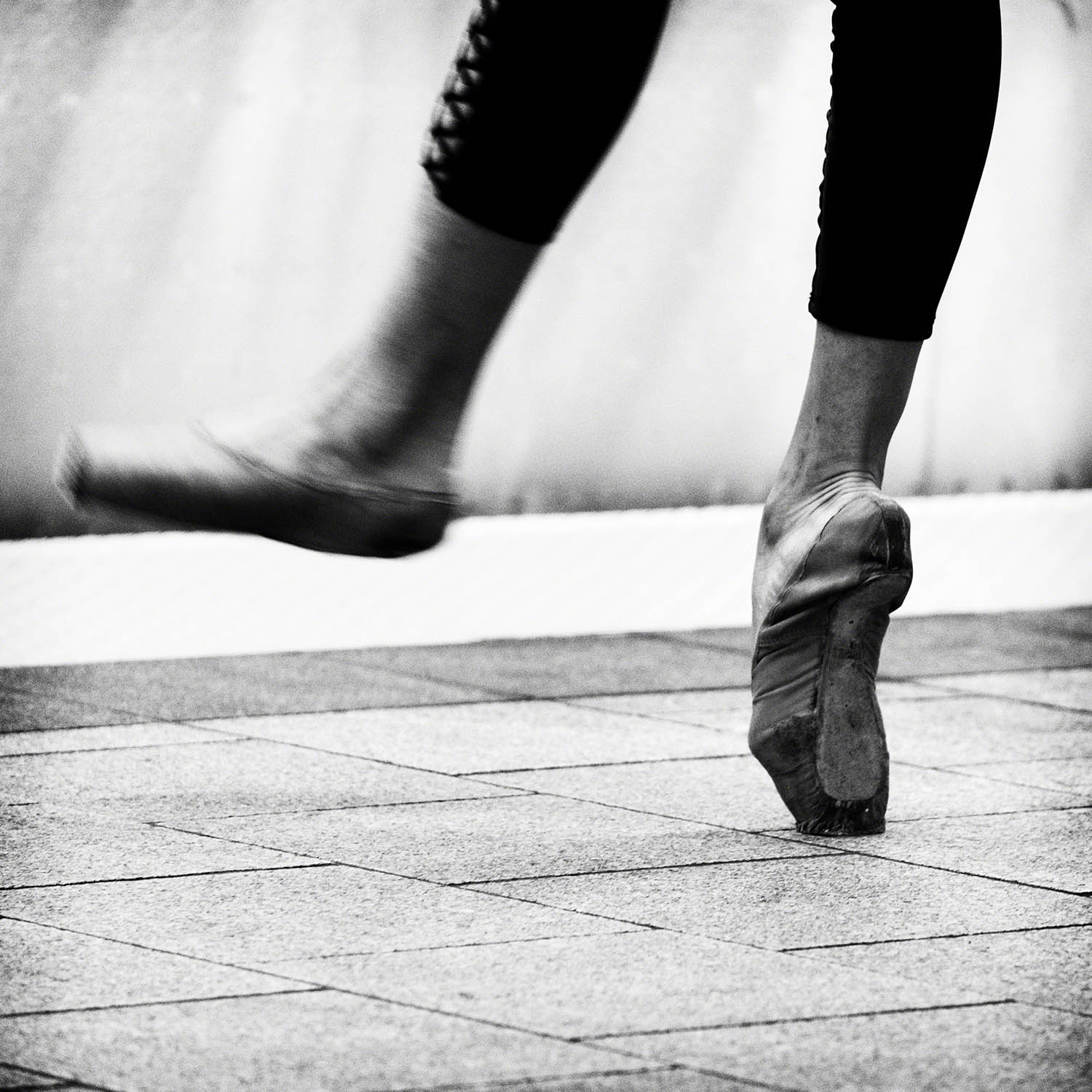 Art Created in Public is Entertaining

Watching them work on a bridge in Tribeca was entertaining. I couldn’t decide which was more fun… photographing Omar and Alexandra as they created their art, or recording people’s reactions to it (or lack thereof!). Watching people purposely ignoring things is interesting… 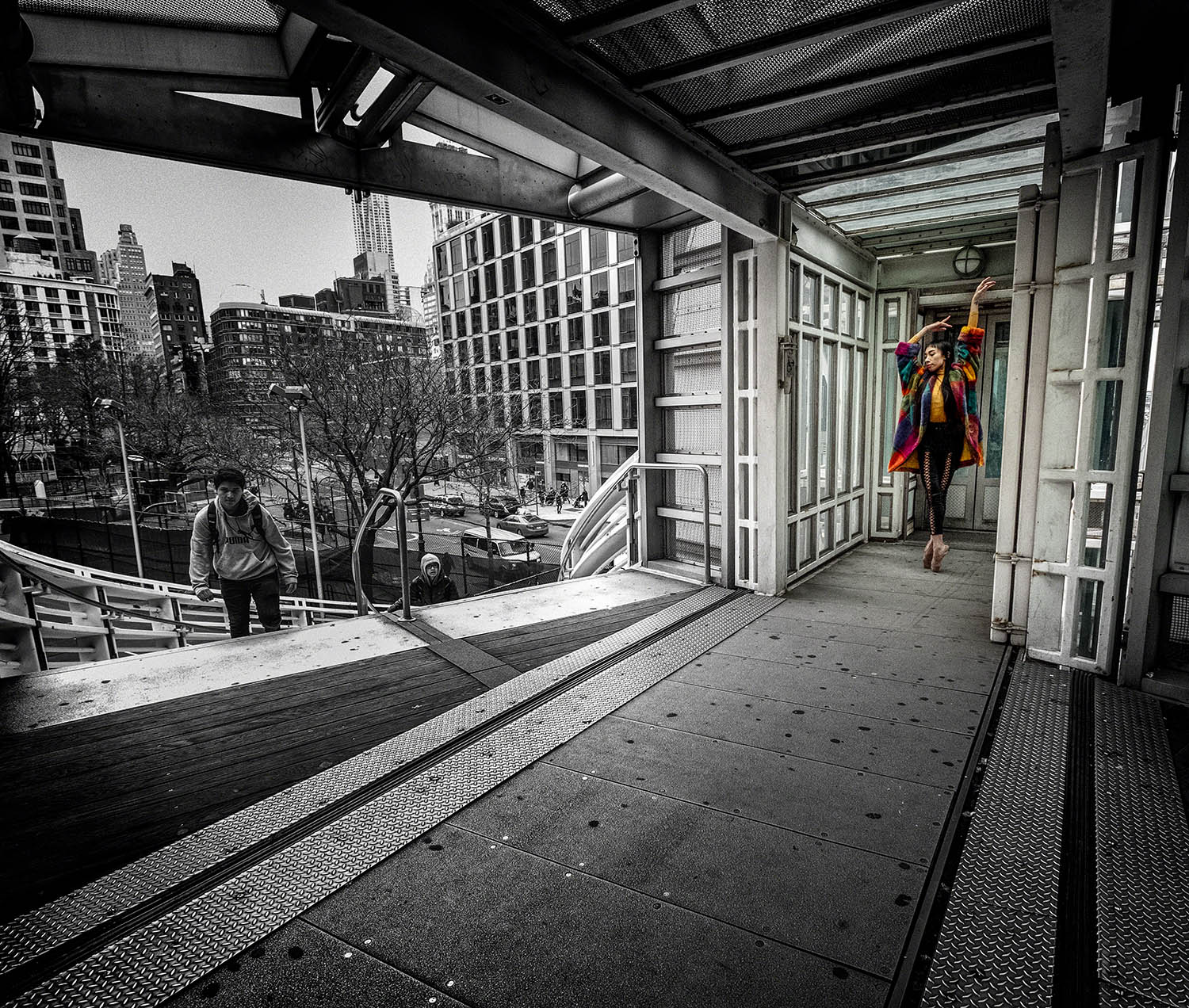 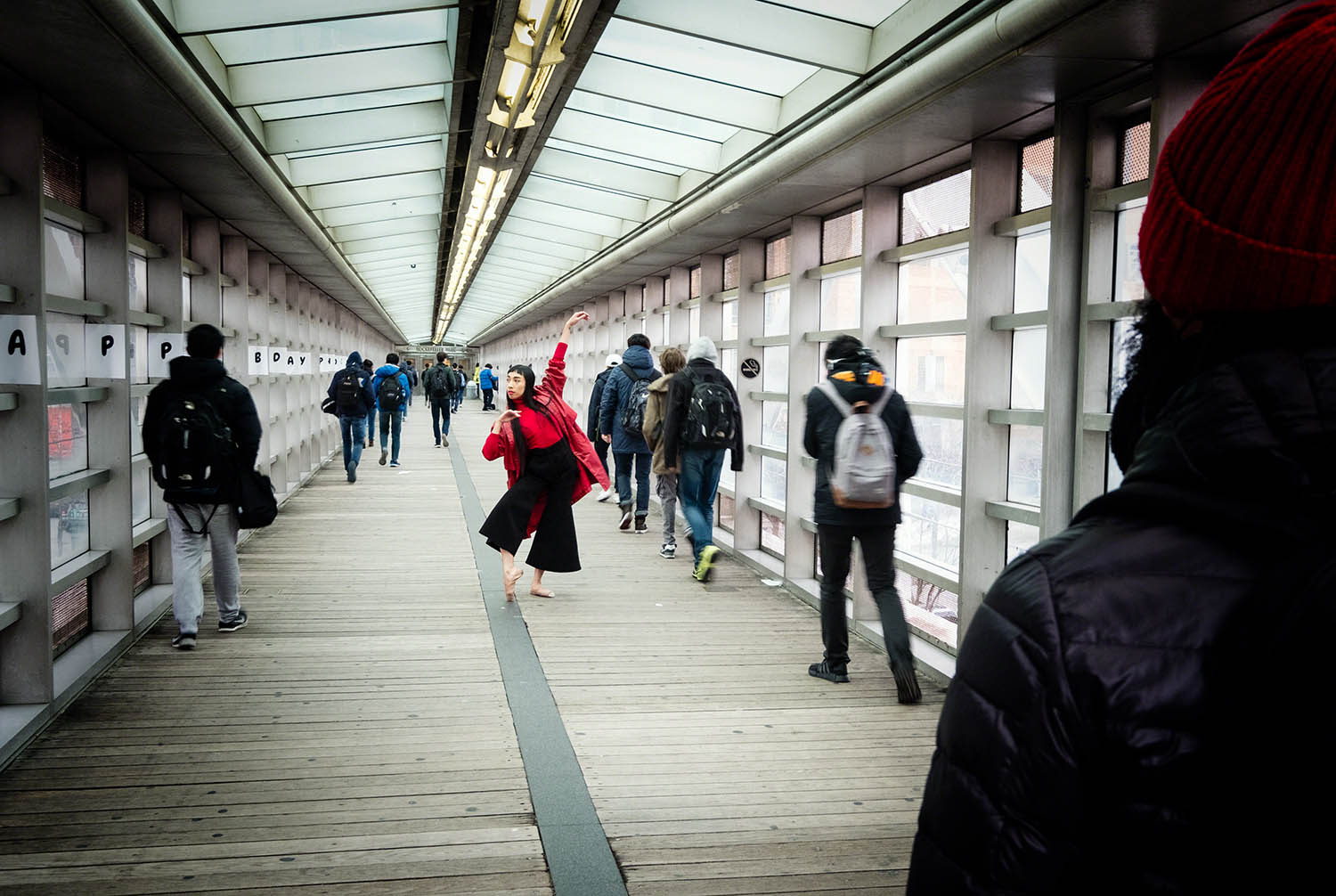 After the bridge, we ventured out to some nearby piers. And Lordy it was cold! Omar and I had our winter gear… but not Alex. Yet, not a word of complaint did her lips utter. She just rubbed her numb feet between takes, then got back in action. Dancers are tough, man. 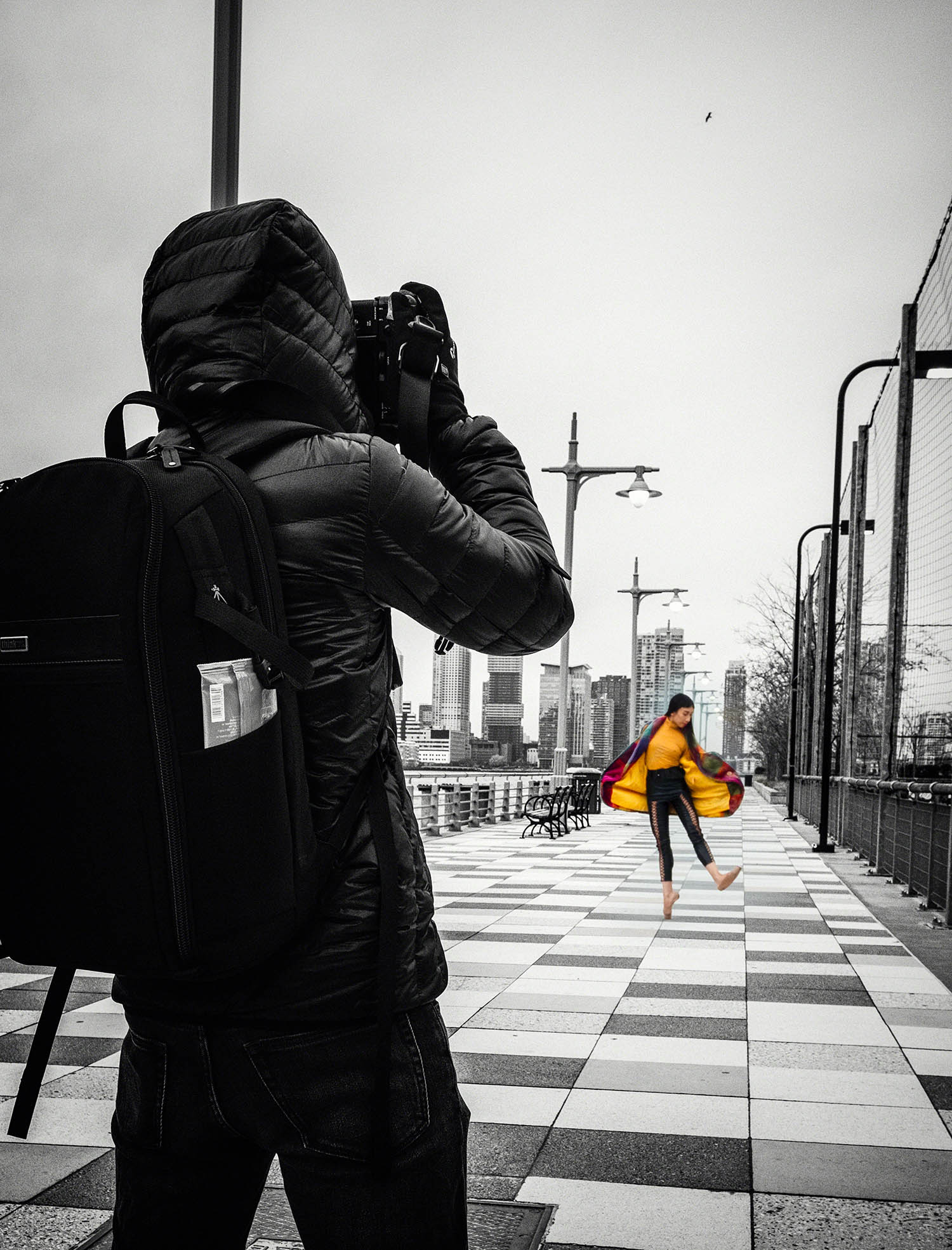 I loved watching Omar work. In between shots and while we walked from one location to the next, he and I talked cameras (he shoots with a Fujifilm X-T2 as I do. The BEST camera for so many jobs and reasons!), business, photography, art, acting and all kinds of fun stuff. That’s something I miss sometimes… art talk.

I was struck by how perfectly his performing background, passion and mad photographic skills are suited to this ongoing project with dancers.

His story is such a lesson for us all; focus on what you know and love the most, be relentless in its pursuit and allow the results to unfold.

It didn’t all start in NY. In fact, after graduating from the Marcel Marceau school in Paris, he finished his education at his parents’ insistence, back home in Puerto Rico. He ended up with a degree in Communications and Visual Arts and started working as a photographer for magazines there, until he ventured to the states to pursue a professional photography career. He landed in NYC as a street photographer, then got this idea about adding the element of flight to his work. He fleshed it all out by photographing himself doing the leaps (he’d been a dancer, after all) … but then expanded to professional ballet dancers.

In the end, he transformed his street photography by substituting the New Yorker with the NYC dancer. He uses his own deep knowledge and background in movement to direct them into the stories and physical expressions that have become his signature images. They’ve been featured in blogs and magazines around the world at this point… and have created a powerful career, all out of following what he loves most. That’s my whole point when it comes to finding your artistic voice, y’know. Omar embodies it like there’s no tomorrow.  Did I mention his Instagram following is huge? Yeah, 226K as I write this. So it’s a lesson for us all. Stay the course!

Our final stop was a brand new subway station out near the Hudson Yards. It was actually clean and pretty unpopulated, except for some security guards and janitors. They all stopped to watch for a bit. It probably made their day! I heard one of the guys say “I’m watching my future wife”, as Alex deftly managed yet another costume change.

Do we laugh or cry at moments like that? I can never remember. Or decide. 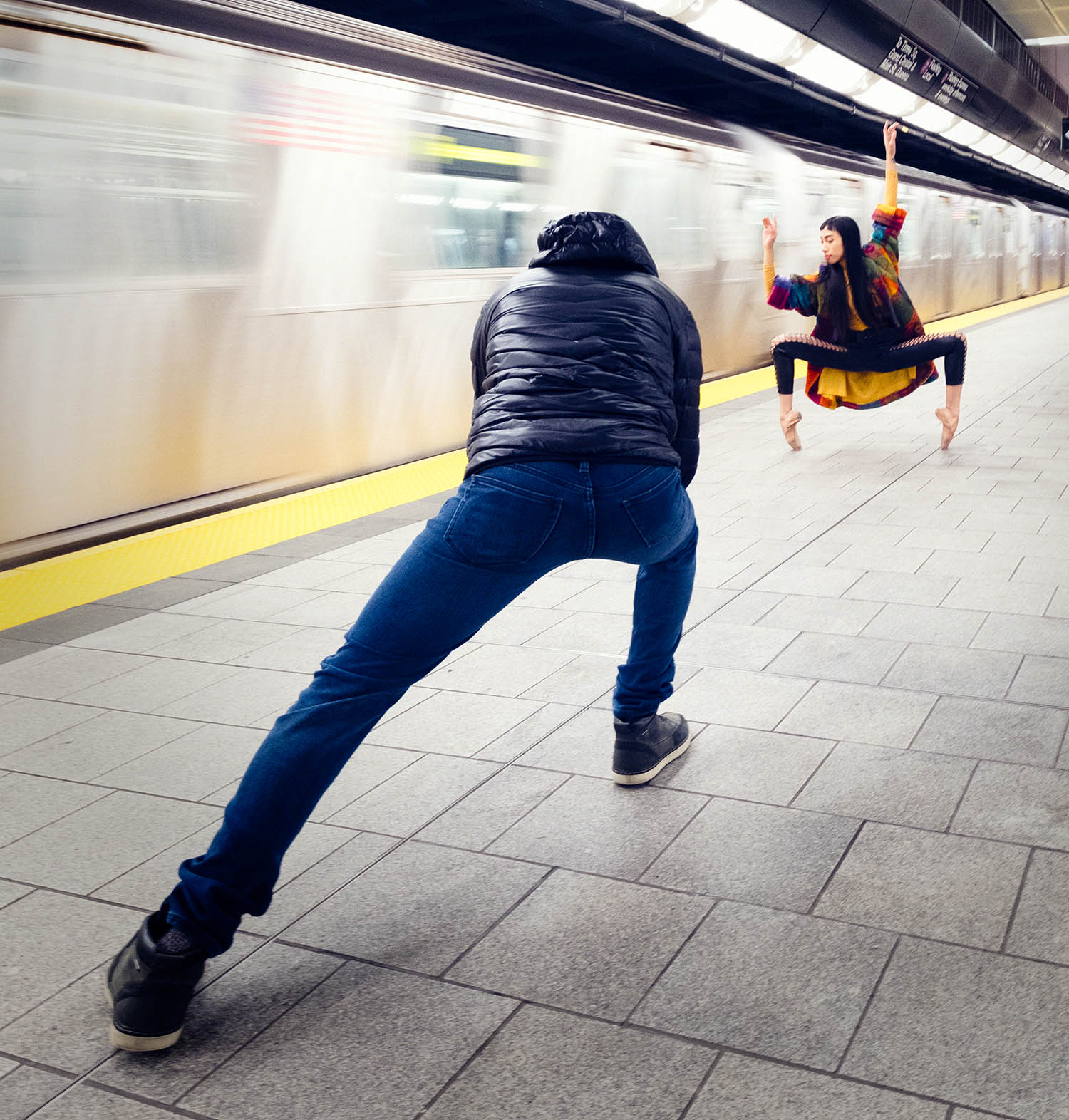 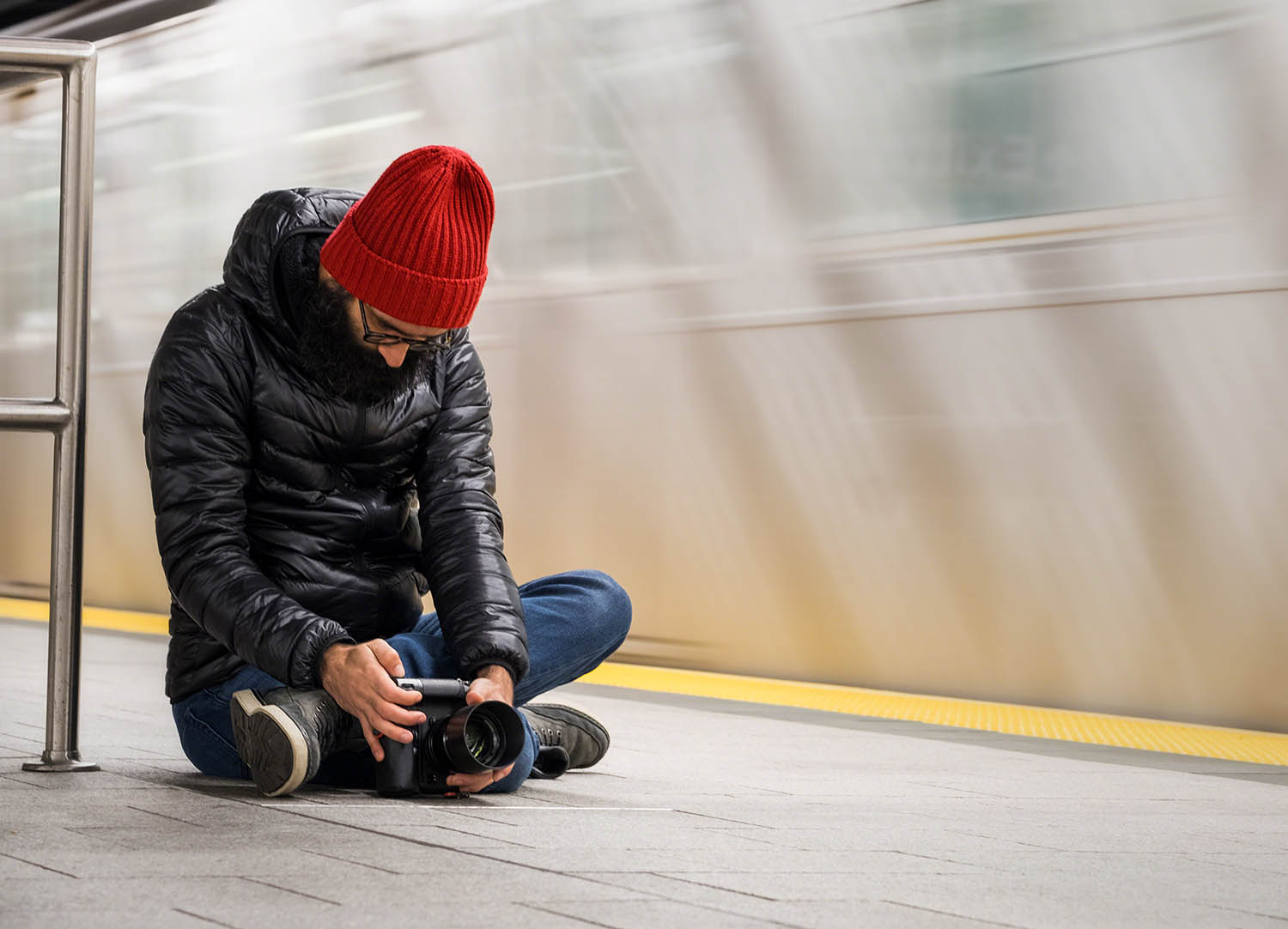 After that, we went our separate ways. I hugged them both warmly, thanked them with all my heart – and relived every moment from my Most Excellent Day with Omar and Alex throughout the rest of my stay in New York.

Thanks guys.
You may have made my year.

Love this? You might enjoy this:  magic at the Paris Opera House.